What will a strong El Niño mean for Great Lakes water levels this winter?

New water level model from the US Army Corps of Engineers shows range of past El Niño winters and possible range of impacts.

“There is an approximately 95 percent chance that El Niño will continue through Northern Hemisphere winter 2015-16, gradually weakening through spring 2016,”  according to NOAA’s National Weather Service Climate Prediction Center on October 8, 2015. What are the possible ramifications of this coming winter on Great Lakes levels?

This is the exact question the U.S. Army Corps of Engineers, Detroit District, wants to answer with a new water level outlook product announced in October 2015. The Great Lakes Water Level Outlook 2015/16 El Niño is now available at the Detroit District’s water level forecast page. This product is a supplement to existing forecast products and was developed to better educate the public on how Great Lakes water levels would respond under a specific climatological scenario.

Strong El Niño’s were also experienced during 1982-83 and again in 1997-98. This new model charts what actually happened with Great Lake levels along with a new prediction range for the winter of 2015/16. For instance, the strong 1997-98 El Niño actually helped push levels lower on Lake Michigan-Huron (hydrologically the same lake) while lake levels on Michigan-Huron actually were moved higher in the 1982-83 El Niño. The predictions for levels for Lake Superior, Michigan-Huron, St. Clair and Erie show this expanded range from the usual six-month forecast published by the Corps of Engineers. In the examples shown for Lake Superior and Michigan-Huron, the most probable forecasts for this winter show water levels above what they were in the 1997-98 strong El Nino year. 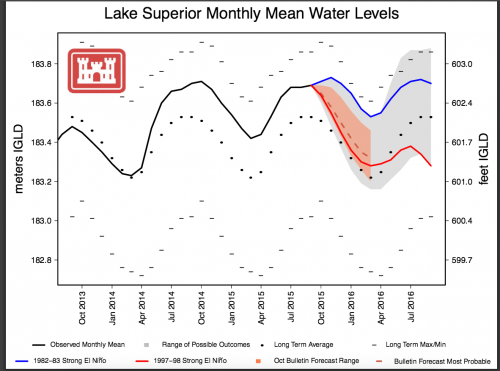 Michigan State University Extension and Michigan Sea Grant often provide updates on Great Lakes levels to audiences including commercial and recreational fishers, riparians, elected officials and citizens at various events over the winter. At the October 2015 State of Lake Michigan Conference held in Traverse City, Dr. John Lenters, senior scientist with LimnoTech and lead researcher on a major study on evaporation over the Great Lakes, gave a keynote talk about the impacts of evaporation over the Great Lakes.  Evaporation was referred to as “the invisible elephant” because it is a river of water into the air which is largely unseen, sparsely measured, underappreciated, counterintuitive and often misunderstood. The relatively new Great Lakes Evaporation Network is conducting groundbreaking research and will continue to capture crucial knowledge about the complex physical and atmospheric dynamics of the Inland Seas over the next years.

As we head into a strong El Niño winter, products such as the new forecast tool from the Corps of Engineers will help us better understand a range of likely scenarios on Great Lakes water levels.