Why are the strawberries so small this year?

Across Michigan, strawberry growers are wondering why their fruit is so small.

This year the first pickings of strawberries at many southern Michigan strawberry farms had surprisingly small fruit. This has frustrated strawberry growers. They worry their customers, especially pick-your-own customers, will be disappointed and this will ruin their standing in the market. Many growers are wondering if they should open at all. They also wonder why the fruit is so small this year.

One explanation is the freezes on May 8 and 9, which could have damaged the flowers and fruit. However, many strawberry growers think there are other factors. Some growers say that the strawberries just did not look right from the beginning of spring. Strawberries are a perennial crop and the crop this year is often determined by conditions of the previous year.

This article looks at some of the factors, which may have influenced the crop in 2017.

Widespread freeze on May 8 and 9

The immediate cause of small fruit could be the widespread freezes that hit Michigan on May 8 and 9. Many strawberry growers protect against freezes using sprinklers. When temperatures will drop below freezing, they run their sprinklers making ice in the field. It seem backwards to make ice to protect from freezing injury. Michigan State University Extension recommends as long as growers keep the ice wet, it will remain right at the freezing point of water and prevent damage from freezing. This is because the temperature that will kill the flowers and damage the fruit is actually a couple of degrees below freezing.

To work effectively, growers need to start early when the temperature is still above freezing, they need maintain good coverage throughout the night and into the morning until the temperature is above freezing. If they start too late, if the turn off the sprinkler too early or if they have another problem, there can still be damage. In some cases, the freeze killed many flowers and in strawberries as in other fruit crops, the first flowers to open are the largest fruit. The secondary and tertiary flowers yield smaller fruit.

Last winter was generally warm, but there were several cold snaps which could have caused injury. Last October and November were warm with only a few freezes until November. The first hard freezes were in late October, but then the weather was warm until more freezes in late November.

January was warm, often above freezing during the day. Snow that fell during this time often melted in several days. There was little if any snow cover for most of the winter. In early February there was another cold snap, with temperatures near zero. Most of February was warm with conditions we would expect in March as spring approaches. By the beginning of March, strawberry leaves were green and active and tightly packed leaves were visible in the crowns. In mid-March, the last significant cold of the winter dropped temperatures to around 10 degrees Fahrenheit. This freeze caused some damage to early developing fruit crops such as apricots. There were four distinct episodes of winter cold, which could have damaged the strawberry crowns. However growers have not reported much, injure to strawberry crowns.

It was colder in strawberry fields a few inches from the ground and these early freezes could have damaged the flower buds before bloom. On May 8 and 9, bloom in strawberries was widespread across southern Michigan. On May 8 and 9, there was a wide spread freeze that caused damage to many fruit crops, in Michigan. This freeze also affected strawberries causing the loss of flowers and fruit. As noted above the lost flowers would have been the largest fruits of the first picking. Some growers had losses to these freezes, but other growers do not think these freezes are the cause of the small fruit in 2017.

Strawberries are commonly mulched with straw in the late fall or early winter to provide winter protection from freezing weather. Straw mulch prevents damage caused by the repeated freezing and thawing of the ground. The mulch also reduces desiccation of the plants during a windy dry winter days when the plants lose water to the air. This water is hard to replace when the ground is frozen. The straw mulch is usually set out after several hard freezes when the plants become dormant for winter. Counties close to Lake Michigan often have winter snow cover, from heavy lake effect snows in December. The ground often remains snow covered until March. These growers often apply their straw between the rows in March or April as growth begins. Most other Michigan growers apply straw in late November or early December.

Growers who applied straw before the Dec. 19 freeze seem to have had less damage than berries mulched later in the winter. This winter was also very windy and growers reported that much of their straw blew off the field. This would have left strawberries unprotected from cold temperatures and desiccation.

Leaf growth was in general poor in many varieties during the spring of 2017. This poor growth could have been caused by winter injury, cold wet soils or other factors. The poor leaf growth and lack of leaves would have stunted growth of the plant. With less leaf surface to feed the developing fruit the fruit would have been smaller. Some growers report latter pickings of fruit have better size than they had expected after the first picking and later varieties are not as affected as the early varieties.

Another issue may have been pollination. Periods of cool rainy weather were common in early May during the early bloom period. Poor pollination may have contributed to low set in some locations. Small seedy fruit and uneven growth are symptoms of poor pollination. If the seeds are not pollinated, they do not stimulate the growth of the berry around them. 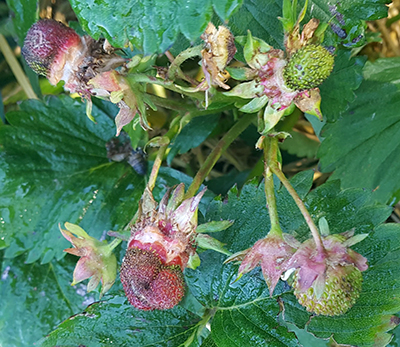 Very small seedy fruit are an indication that the flower was not pollinated and growth was stunted.

Bronzing of the fruit

Many growers also report that the fruit is bronzed. Bronzing of the fruit can caused by flower thrips early in the season but the bronzing we are seeing this year is different. This spring we are seeing very uniform bronzing across all or most of the berry. We think this bronzing was caused by sunny hot days in mid-May when most of lower Michigan suffered hot dry winds. The general lack of leaves contributed to this since the fruit was not protected from the direct sun. 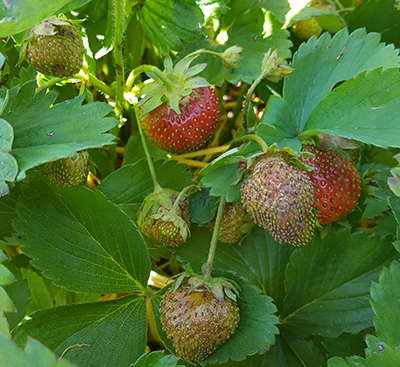 The brown bronzing of the skin was probably caused by exposure to very sunny conditions which damaged the tender skin of the berry.

Humans want simple answers. We want one reason why fruit are small. It appears there are multiple causes for small fruit this season. Contributing factors appear to be the quick onset of very cold weather in December after a long warm fall, multiple cold events during a warm winter that could have damaged the plants, desiccation from the wind during the winter without snow cover, and multiple freezes when the flowers emerged from the ground and during bloom. Individuals will need to decide which of these issues were most important for them.

Suggestions for the future

First, watch the weather and try to get mulch applied after the plants have gone dormant, but before severe cold occurs. Consider mulching in the fall if you have not. Winter weather appears more variable now and snow cover is less consistent. Lastly, make sure your sprinkler system is set up properly for spring frost protection.