Storm clean-up continues to dominate the landscape business. Examining damaged trees can provide a lot of insights into why trees fail during windstorms (as Yogi Bera noted, you can observe a lot just by watching). Two of the most common forms of tree damage during windstorms are limb breakage and wind-throw. Major limbs often fail during windload to the formation of included bark. Included bark is bark that forms between the main trunk and a branch that is attached by a narrow branch angle. As the branch and the trunk grow, the attachment is weakened as a greater proportion of the limb connection is compromised by bark. MSU graduate student Sara Tanis shared some photos of a maple that broke up during one of recent storms. Note the amount of branch connection that contains included bark. Also note the limb on the right side of the tree that shows a narrow attachment angle and could be the next candidate for trouble.

When trees are blow down, roots and all, it is often referred to as wind-throw. Wind-throw is typically associated with trees with shallow root systems. For example, in the recent storms I noticed a lot of spruces that were wind-thrown. Wind-throw is also common when high winds are accompanied or preceded by heavy rains. When the ground is soaked and soft, trees are easily up-rooted. Some landscape practices can also contribute to wind-throw. For example, the root zone of a spruce was confined by landscape edging material and landscape fabric became a prime target for high winds after a day-long rain. 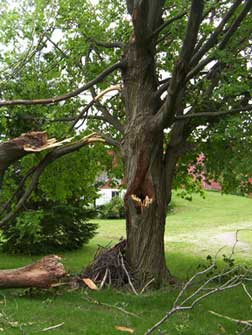 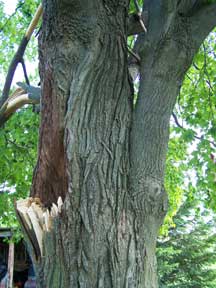 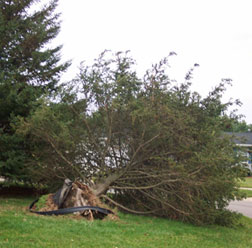 Damage from an October 2003 storm.