Yes! We are restoring the Detroit River’s Area of Concern

Cleaning up pollution and restoring the Great Lakes is not an easy or quick process. Progress is being made in the Detroit River Area of Concern thanks to the hard work of many individuals, local groups and state and federal agencies.

This is the second in a series of articles highlighting Great Lakes restoration projects in Michigan’s Areas of Concern.

Background on the Detroit River Area of Concern:

According to the United States Environmental Protection Agency (U.S. EPA), the Detroit River is a 32-mile international, connecting channel linking Lake St. Clair and the upper Great Lakes to Lake Erie. The Detroit River Area of Concern (AOC) includes the areas that drain directly to the river and the drainage area of its tributaries in Michigan and Ontario (700 square miles). It also includes the City of Detroit “sewershed” area (107 square miles). It is a bi-national AOC with complex issues in both the U.S. and Canada that have negatively affected water quality in the river. Approximately 75 percent of the total land area of the watershed is in Michigan (607.7 square miles). Eleven beneficial use impairments have been identified in the river. The known causes of impairments include urban and industrial development in the watershed. Combined sewer overflows (CSOs) and municipal and industrial discharges are major sources of contaminants within the AOC. Stormwater runoff and tributaries in Michigan are also major sources of contaminants. Additional environmental concerns include invasive species, changes in the fish community structure and reductions in fish and wildlife habitat.

The Friends of the Detroit River currently provide leadership and guidance of the Area of Concern (AOC) Public Advisory Council (PAC). They are working with local, state and federal stakeholders, including Michigan Sea Grant, on a variety of projects that will restore beneficial uses in the river and lead, ultimately, to its “delisting” – the removal from the formal list of Great Lakes Areas of Concern. 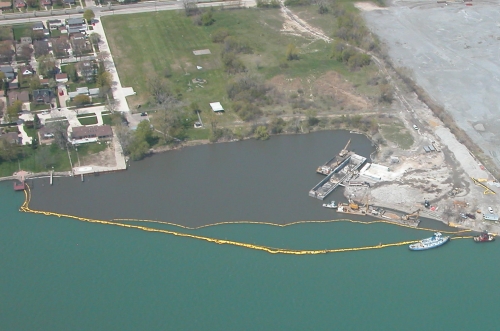 The Black Lagoon on the Detroit River in Trenton, Michigan, was the first contaminated sediment site to be cleaned up under the Great Lakes Legacy Act, a program administered by the  US EPA that supports the remediation of toxic sediments in AOCs. Sediment in the Black Lagoon was contaminated with oil, grease and heavy metals (including high levels of mercury) and was, therefore, considered a major contaminated sediment "hot spot" in the river. The sediment contamination stemmed from a legacy of historical industrial inputs. In fact, the site got its name when aerial photos from the 1960s exposed black plumes of oil and grease originating near the McLouth Steel plant, immediately upstream of the lagoon.

In 2004, funding from the Great Lakes Legacy Act, Clean Michigan Initiative and other sources supported the removal of approximately 115,000 cubic yards of contaminated sediments containing approximately 478,000 pounds of PCBs, mercury, oil and grease, lead, and zinc from the lagoon. The site has since been renamed Elias Cove. The native habitat was restored along the shore, a park was enhanced, and the area has been a catalyst for revitalizing the city’s entire shoreline and waterfront district. This sediment removal project will aid in the eventual removal of several BUIs.

In 2010, Friends of the Detroit River was awarded nearly $3.5 million to improve wildlife habitat in three areas of the Detroit River. Two of the projects (Blue Heron Lagoon and South Fishing Pier) are in the northern portion of the river on Belle Isle. The Blue Heron Lagoon Project will reconnect and naturalize the mouth of the Lagoon to the Detroit River, restoring fish access to 2.2 miles of canals and 95 acres of wetlands, shallow and deep water habitat. The South Fishing Pier Project will create 2.5 acres of coastal wetland immediately downstream from a spawning reef and create deep and shallow water habitat in the flat bottomland of the U.S. Coast Guard Fishing Pier. The third project is at the U.S. Steel Facility, in the central part of the Detroit River. This unique public / private partnership  will increase upland, shoreline and aquatic shoal habitats along approximately 1,500 feet of shoreline.

In 2011, the Friends of the Detroit River conducted a fish survey to help assess the quality of taste and smell of fish caught from the Detroit River, as it relates to the beneficial use impairment for Tainting of Fish and Wildlife Flavor, and to determine if there is enough evidence to recommend the removal of this impairment. Preliminary results of the survey suggest that it removal can be recommended.

The table below lists the current impairments listed for the Detroit River AOC and their status.

MSU Extension educator, Mary Bohling serves as Chair of Michigan’s Statewide Public Advisory Council, formed in 1991 to facilitate public participation in decisions affecting Michigan's AOC program, heighten public awareness of and participation in the Remedial Action Plans being developed in the AOCs, and generate public support for implementation of restoration and protection measures. The Great Lakes Commission supports the council with funding from the Michigan Department of Environmental Quality and the U.S. EPA. Future articles will detail specific progress and achievements taking place in Michigan’s AOCs.

If you build it they will come - restoring wildlife habitat in the St. Clair River Area of Concern