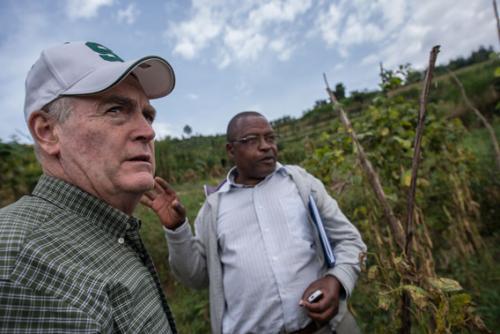 Jim Kelly (left) and Edouard Murwanashyaka, from the Rwanda Agriculture Board, teach local farmers how to test and grow beans that tolerate drought and resist diseases

Rwanda is recovering from a bloody four-year civil war in the early 1990's that resulted in the loss of an estimated 800,000 individuals, and devastated the countryside.    Native bean varieties that had evolved there were lost, resulting in civil unrest, scarcity of food, poverty and malnutrition.

Beans are an important component of Rawanda's farming system, occupying 30% of the land suitable for agriculture. Rwanda has the highest per capita consumption of beans in the world, in the past production was outpaced by consumption. 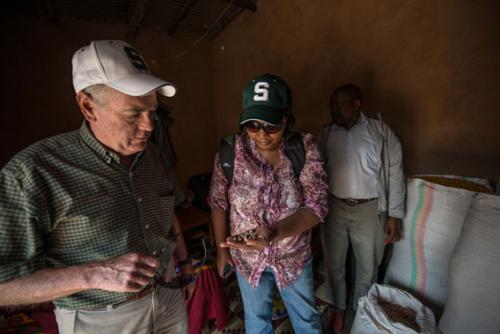 Distinguished Professor James Kelley works with his Rwandan Ph.D. Student Gerardine Mukeshimana (image below right),  to breed drought tolerant, nutrient rich and disease resistant climbing bean varieties and reintroduce them to Rwandan farmers, many of whom are women.

Climbing varieties introduced by Kelly,  resulted in improved yields from 1/4 ton per acre to 4 tons per acre in the country.

Other varieties developed by Kelly include a climbing variety suitable for high altitudes, which will make more efficient use of the available agricultural land mass for bean production.

Dr. Kelly is funded by a United States Agency for International Development bean variety grant program.  The ultimate goal  of the program is to  train and leave behind scientists who will continue to research sustainable agricultural productivity under the changing climatic conditions.

Click here to learn more about Dr. Kelley and Rwanda

Watch a video about Rwanda 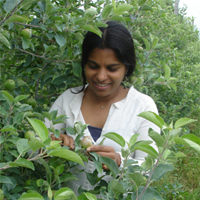 According to UNICEF statistics, 33% of Sri Lankan children and 25% of women suffer from malnutrition and micronutrient deficiency.  Vitamin A deficiency, which is known to negatively impact vision and immunity to diseases, is estimated to effect 33% of children under six.

Dr.  Cholani K. Webadde,   a native of Sri Lanka and currently an Assistant Professor in the Dept. of Plant, Soil and Microbial Sciences is cooperating with Sri Lankan Counterparts on two crops currently to combat malnutrition.

Rice:   Researchers are developing rice varieties which are submergent, drought and salinity tolerant, which allows the  utilization of marginalized land for cultivation of micro nutrient rich rice.

Cowpeas:   Cowpeas are an important source of protein in the Sri Lankan diet, the Cowpea breeding program works to improve the following traits:  drought tolerance,  enhanced nutrient levels that include high levels of proteins and enhanced levels of antioxidants.

Commitment to the future: 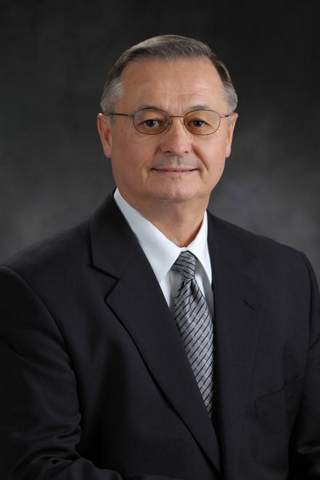 Dr. Alvin Smucker a Professor of Soil Biophysics and Director of Soilwater Retention Technology is researching and developing subsurface water retention technologies  (SWRT) that will allow cultivation of crops in semi arid and arid regions and will reduce quantities of supplemental irrigation required, protect potable groundwater supplies, and enable more efficient use and control of fertilizers and pesticides.

In a recent interview, Smucker indicated,  "This technology has the potential to change lives and regional landscapes domestically and internationally where highly permeable, sandy soils have prohibited the sustainable production of food,”

Undoubtedly, this technology will be one more weapon in the arsenal against the future impact of global climate change.

Click here to learn more about SWRT and Dr. Smucker.