Three species of cutworms are pests on golf course turf: the black cut worm, the bronzed cutworm and the variegated cutworm. Cutworms feed on many plant species. The young cutworm feeds on plant material without cutting off the stems or leaves but later becomes a true cutworm when it begins to cut off foliage and carry it back to its burrow. Cutworms are found throughout North America. The black cutworm is the species most likely to damage turf in Michigan. 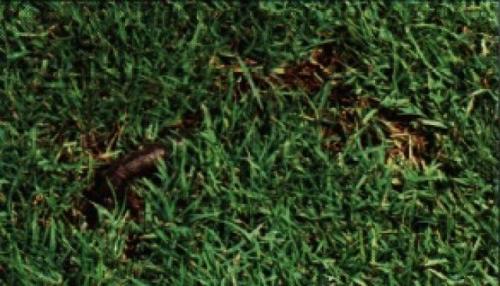 The black cutworm has many weed and crop hosts. It is a common problem on creeping bentgrass greens of golf courses, which can tolerate very little feeding injury. Although cutworms are also found on fairways, they rarely cause enough damage to be considered a problem there. 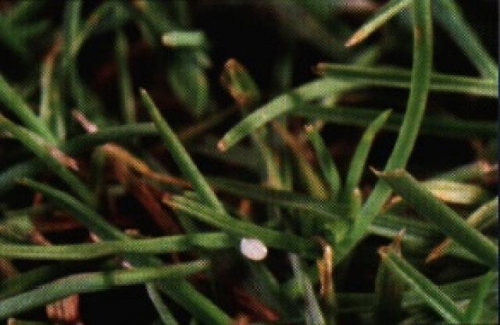 Black cutworms dig burrows in the thatch or soil of a golf course green. They emerge at night to feed on the roots and shoots of grass plants. Their feeding damage resembles ball marks on golf course greens - round or depressed spots of dead turf (Fig. 1). The caterpillars often use aeration holes for burrows, but aerated greens do not have more cutworm damage than greens that are not aerated. Cutworms simply occupy the aeration holes when they are present on a green instead of making their own burrows. 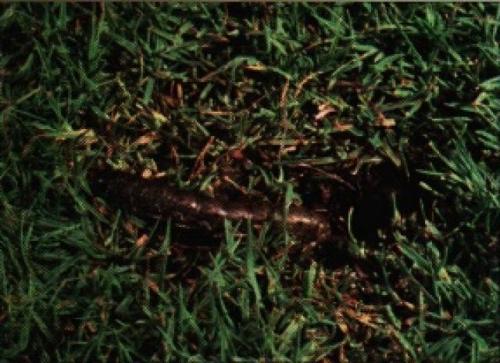 Black cutworms overwinter and the southernmost regions of North America. Every year, the adult moths migrate northward and arrive in Michigan in early to mid June. They can complete one to three generations per season in Michigan. The adult moths mate and feed at night on flowering trees, bushes or weeds near the golf course. The female lays eggs singly on the tips of grass blades (Fig. 2). One female can lay 300 to2,000 eggs over a series of several days. The eggs hatch in three to 10 days (depending on temperature) and the young caterpillars begin to feed on the grass shoots. As the caterpillars increase in size, they burrow into the turf and move to and from these holes at night to feed on the grass. Cutworms require 20 to 40 days of intense feeding to form pupae. After two weeks in the pupal stage, they emerge adult moths. Moths may stay in the local area or migrate to other locations. 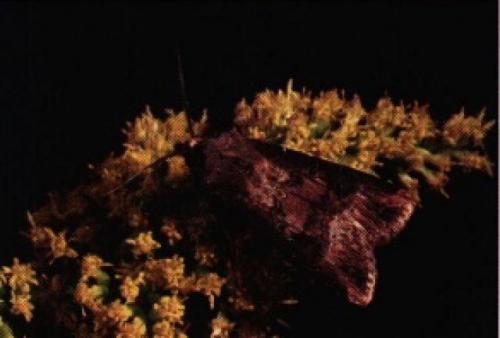 Larvae are hairless caterpillars with markings on the head and body (Fig. 3). The upper half of the body is a darker gray than the lower half. They have black dots along both sides of their body. Cutworm caterpillars grow to a width of 0.2 inch and a length of 1.4 to 2 inches. Most cutworms curl up in a coil when disturbed
The adult moth is gray with black markings on its wings (Fig. 4). The wingspan can be 1.4 to 1.8 inches. When the moth is not flying, it rests its wings flat over its body.
Management: Monitoring for cutworms is important for management. A soap solution (1/2 ounce of liquid dish soap per 3 gallons of water) applied as a drench to the green during the day will flush the caterpillars from their burrows. If three to eight cutworms per square yard are found, a pesticide application may be needed. A 20-foot border around the green should also be treated because most of the cutworms found on the green come from the surrounding turf. Refer to the extension bulletin " Commercial Turf Establishment and Pest Management" (E-2178) for insecticide recommendations.

For early detection, pheromone traps can be used to monitor the adult moths as they migrate into Michigan. Regular delta traps with black cutworm pheromone lures inside should be hung near the greens. This method will tell you when the first moths begin showing up at your golf course and you can begin monitoring the greens for the damaging cutworms. Refer to the Great Lakes IPM Inc. (Vestaburg, Michigan) catalog for more information on black cutworm traps and lures.

Daily mowing of greens removes 75 to 97 percent of the cutworm eggs before they hatch, but up to 90 percent of the eggs removed by the greens mower can survive and hatch and grass clippings. Therefore, the clippings must be disposed of 100 yards or more from the green because cutworms may crawl long distances (up to 30 feet per night). Also, mowing early (before 5:30 AM) one morning each week will destroy most cutworm larvae before they can return to their burrows. Regular sampling for cutworms and damage, followed by insecticide treatment, if needed, will protect turf grass against significant damage by black cutworms.