Unfortunately, if you own horses long enough, the time will come when you must make decisions about a deceased horse. For many horse owners, this becomes problematic because their land base resources do not allow for appropriate disposal procedures, so options for carcass disposal may be limited, and they may have no plan to manage equine mortality. Horse owners may not be aware that composting — more specifically, open-static pile composting — is an acceptable and viable way to dispose of a horse carcass.

Composting is the managed biological decomposition process that converts organic matter into stable, humus-like material. In the past three decades, science has proven that animal tissue can be effectively and safely composted. Before this, it was generally unacceptable to compost animal remains. Microorganisms flourish with the proper mixture of bulking agents (sometimes referred to as “feedstock” or “amendments”; see Table 1), animal tissue, water and air. The process consumes tissue, minimizes odors and produces quality finished compost.

Bacteria in a compost pile carry out the majority of the decomposition of the carcass and bulking agents. The activity of these organisms results in the production of heat as they consume sugars, starches, proteins, fat and some cellulose.

When selecting a composting site, especially if you are using the open-static pile composting method (Photo 1), it is critical to minimize environmental impacts. The location of the composting site should minimize the impact of odor and other air quality issues on neighboring residences, as well as minimizing the movement of nutrient-containing water or effluent into surface and groundwater resources.

Other considerations include the direction of prevailing winds, property lines, proximity to recreational or public sites, aesthetics and the slope of the site. 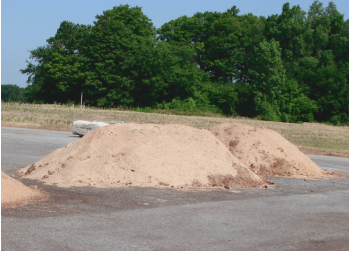 Michigan has specific criteria that all composting sites must meet:

Concrete makes an excellent foundation for a composting site that is easy to clean and maintain. However, a small area in a field or pasture is also acceptable if appropriate environmental considerations mentioned previously have been taken into account. Drainage around the pile is particularly important. Water should not pond around the pile, and access to the pile with a loader should not be limited by great amounts of mud. A base such as gravel, lime, sand, wood chips or other materials is not recommended because it may make mixing and turning the material more difficult.

Getting the Compost Recipe Correct

A good compost recipe will stimulate microbial population growth, minimize odors, and produce quality finished compost through the proper mix of bulking agents, animal tissue, water and air. The five components of a good recipe are:

Moisture content. As a general rule, compost should be moist to the touch. At the start of composting, the moisture content of the bulking agent mixture surrounding the carcass should be within the range listed above. The bulking agent used as the base of the pile should be around 15 to 30 percent moisture to absorb liquids that will exit the body cavity when it is opened by microbial degradation. Active composting will fail to occur if the materials surrounding the carcass are too wet or too dry. If the pile becomes too wet, materials will form a ball or drip when squeezed by hand, and aeration must be used to restart active composting. If the pile becomes too dry, water should be added, preferably by a uniform, consistent spray.

The pile should be cone-shaped to shed as much water as possible. This helps prevent the accumulation of moisture when large amounts of precipitation occur over a short period of time and lessens the movement of nutrients from the compost into the soil.

Oxygen concentration. Both anaerobic (without air) and aerobic (with air) activities occur when a whole carcass is composted. Before the mixing or aeration of animal tissue compost materials, microzones of airlessness exist inside the carcass. Anaerobic microorganisms work to decompose the tissues, releasing nutrients, fluids and gases, which disperse into the surrounding bulking agent. This interface, where tissues, products of anaerobic decomposition and bulking agents meet, is a critical aerobic microzone. Aeration by turning, moving or mixing (Photo 2) the compost batch promotes the growth of hardier, more robust aerobic bacteria by infusing air into the materials and providing a desirable oxygen concentration of 5 to 20 percent. 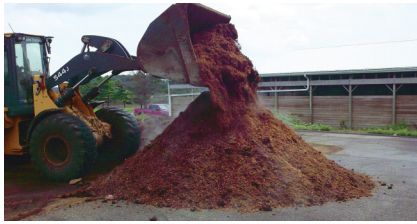 Photo 2. Utilizing a front-end loader for turning, moving and mixing.

Bulking agent particle size is important because it affects the air spaces within the pile. If particle size is too fine, oxygen cannot move through the pile. Limited microbial activity and odor production result. Fine particles, however, are absorbent and help capture fluids released from tissues during composting. If particle size is too large and variable, there is too little interface between tissues and the carbon source. This limits microbial metabolism. Excessive coarseness allows too much air through the pile, which cools the pile. A non-uniform particle size range of 0.1 inch to 2 inches is recommended. Particles in this size range provide porosity, optimal surface area, and absorption of odors and liquids. The compost pile should be a maximum of 5 to 6 feet tall to prevent compaction and the loss of air in the pile.

pH. Active composting will not occur outside a pH range of 5.5 to 9.0. A low pH (below 5.5) slows down the composting process; a high pH (above 8.5) promotes the conversion of nitrogenous compounds to ammonia. In most cases, the pH does not need to be adjusted because of the natural buffering capacity of commonly available amendments and the normal pH of animal tissue. Do not use acidic feedstocks such as oak leaves and pine needles or bedding containing lime — the extremes in pH will limit microbial reproduction. Practically, pH is not monitored on the farm. If pile activity is not occurring, pH may be one factor assessed by sending a sample to a laboratory for analysis. 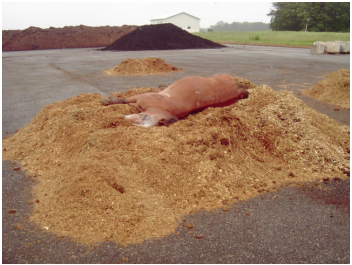 Photo 3. Horse carcass placed in the center of the compost pile foundation. 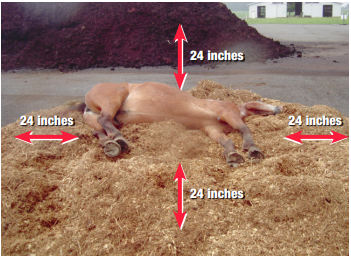 A biofilter cap is a layer of fresh bulking agent placed over a pile to reduce odors and discourage pests (see Figure 1). Carbon-rich materials such as chopped straw, dried grass, chopped dried hay, and sawdust or shavings are preferred as biofilter materials. A fleece blanket (synthetic fabric that sheds precipitation but allows normal composting respiration) could also be used to cover composting materials for partial odor control and pest control. Nitrogen-rich materials such as animal manure solids, partially decomposed materials, green grass clippings, fresh hay, green leaves and litter cake are not recommended and are less effective in controlling odors, insects and vermin.

Figure 1. Illustration of biofilter layer on an open-static compost pile.

Constructing a temporary physical barrier (perimeter fence) around your compost pile will help control scavenging wildlife and pets from rummaging in the compost pile. This can be accomplished using materials such as chain-link or equally restrictive fencing with a gate or gates. If a horse has been chemically euthanized, the fresh carcass of the horse could poison other animals that feed on it. This risk has been shown to decrease over time. Properly covering the carcass with bulking agent, particularly having a biofilter cover, is also a very important preventive measure.

The number of months of well-managed active composting in static batches for the decomposition of all soft tissues from carcasses of various sizes is shown in Table 3. Photos 5 and 6 show the remains of an 844-pound horse in a well-managed pile 30 days into the composting process. 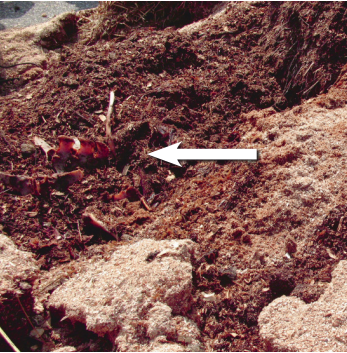 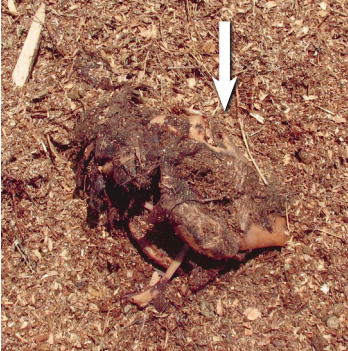 Table 3. Months of active composting suggested for the decomposition of soft animal tissues.

** Aerated by mixing two to three times, keeping a moisture level of 40 to 60 percent, and making sure all tissue resides in the interior of the pile. 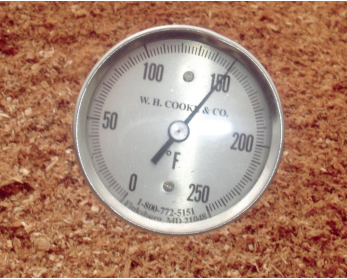 Active composting will take place in cold weather if the compost used as the bulking agent is active and completely surrounds the horse carcass. Animal tissue placed in warm compost during cold weather will decompose without delay. The carcass to be composted should not be allowed to freeze. Frozen animal tissue may thaw and then decompose if placed in a large amount of active compost already 130 degrees F or greater. If the frozen carcass is placed in a new mixture of cold bulking agents, then the composting process may not start until ambient temperatures increase in the spring. This is the challenge for the owner who does not experience consistent mortalities year round, possibly having had only one mortality in several years. If an owner encounters a horse death in winter and does not have access to any unfrozen compost or manure, constructing the compost pile appropriately is an option. Composting will simply be delayed, and the pile will be inactive until temperatures rise. The pile should be protected and managed to maintain its integrity until composting activity begins in spring. Other carcass management options such as burial, incineration, rendering or landfill may be considered if the delayed compost pile approach is not desired.

Animal tissue compost must undergo a minimum of three heat cycles to 130 degrees F or greater before final utilization as finished compost. Practically, the batch or pile must be turned and mixed in place two times after the formation of the pile. Finished compost must have no visible pieces of soft tissue. Soft tissues may be fully decomposed in about 6 months of active composting. The bones, however, which become increasingly more brittle with active composting, may remain intact and need to be shattered during spreading, further composted, buried or sent to a landfill. It may take one to two years of active composting to fully decompose the large bones of a mature animal.

Additional guidelines from the Michigan BODA: The owner or operator of the composting system shall keep records for five years containing all of the following information:

Composting a horse carcass is a viable disposal option for horse owners. On all farms the composting process must be managed attentively from start to finish. Effective composting requires meeting five conditions: the proper C:N ratio, moisture content, temperature, oxygen level and pH. Under these conditions, rapid and complete decomposition will occur. Knowing how to compost a horse carcass will ensure proper consideration of the environment, neighbors and state regulations.

For additional information on animal carcass composting and Michigan regulations, refer to these resources:

Keeping Land-applied Manure in the Root Zone - Part 1: Sediment and Contaminant Runoff (WO1036)