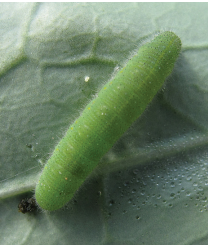 FIG. 1. The body of the imported cabbageworm caterpillar is covered with fine hairs, which give it a velvety look. The color of the caterpillar matches that of the leaf; when scouting, look for signs of fresh damage and frass on the plants. A closer look will reveal the caterpillar feeding on the leaf. 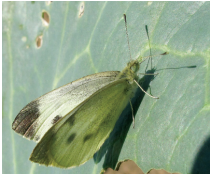 FIG. 2. Adults of the imported cabbageworm are commonly seen flying above plants throughout the summer. These white butterflies can be recognized by the black markings on the wing tips. Female butterflies lay eggs during the course of their life on cole crops and feed on pollen and nectar. 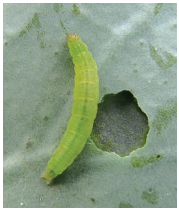 FIG. 3. The larva of the diamondback moth is light green and segmented with tapering ends. The caterpillar spends its life feeding on the leaf. 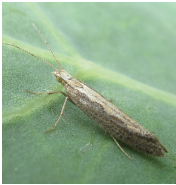 FIG. 4. The adult diamondback moth is a small (1/2 inch) brown insect, with characteristic diamond-shaped markings on the wings, visible when they are folded over the back at rest.

Cabbage looper. Eggs are round and white and typically laid on the leaf surface. The cabbage looper is a pale green caterpillar with a white stripe down each side of the body (Figure 5). The cabbage looper reaches 1 to 1 1/2 inches in length and has a distinctive pale green head capsule. It gets its name from its inchworm motion as it moves along the surface of the leaf. Cabbage looper adults are about 1 inch long, with wings folded over the back at rest. Adults are dark brown and gray moths, with a distinct figure “8” white pattern in the middle of the wings (Figure 6). 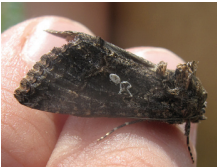 FIG. 6. Cabbage looper adults are about an inch long, with wings folded over the back at rest. Adults are dark brown moths with a distinct figure “8” white pattern in the middle of the wings.

Behavioral differences between the caterpillars can help with identification. When disturbed, the imported cabbageworm will usually remain motionless. On the other hand, the diamondback moth will wiggle its body around. The cabbage looper will either inch away or will try to defend itself by whipping its head toward the source of the disturbance.

Cabbageworm. This insect overwinters in the pupal stage, and adults emerge in the spring. Eggs of the imported cabbageworm hatch in about five days. The caterpillar feeds and develops for approximately 11 to 20 days before forming a pupa from which the adult butterfly emerges after 6 to 11 days. In Michigan, an estimated 4 to 5 generations can occur.

Diamondback moth. In Michigan, the pupae overwinter in field debris, and adults emerge in the spring or early summer. Diamondback moth adults can also arrive in Michigan on wind currents; eggs and larvae can be transported with seedling transplants. The eggs of the diamondback moth hatch in 5 to 6 days. The larvae feed for about 18 days, and then they pupate in a loosely woven net. Finally, the adult moth emerges after 4 to 15 days. In Michigan, an estimated 4 to 5 generations can occur.

Cabbage loopers. Cabbage loopers migrate northward on wind currents from southern states, so they often arrive in Michigan later in the growing season. Larvae emerge from eggs within a few days and develop for 16 to 19 days before pupating. The pupa turns from initially green to dark brown, and the adult emerges 9 to 10 days later. The entire life cycle lasts 32 to 37 days, allowing for one to two generations to develop in a typical Michigan season.

All of the caterpillars cause damage by chewing holes in the leaves (Figure 7). The imported cabbageworm feeds along the edges of leaves, leaving only thick veins behind. It feeds on all ages of leaves but prefers the younger leaves. 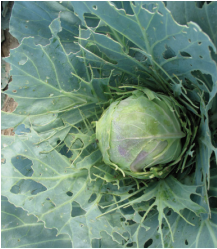 FIG. 7. Caterpillar damage on cabbage: holes chewed into the leaves and head.

The cabbage looper will often feed on the underside of leaves, feeding only on the first layers of leaf tissue. After the plant’s immune system is weakened, the looper begins chewing into the leaf, forming holes. A good indicator of the presence of loopers and imported cabbageworms is fresh frass (droppings) on leaves.

Young diamondback larvae mine in the plant tissue and consume only the middle layer of the leaves. As larvae grow, they exit the leaves and consume all the tissues except the thin layer of transparent wax. This type of damage resembles windowpanes and is characteristic of this pest.

Heavy rainfall or overhead irrigation systems can remove and kill some caterpillars. Removing debris from the field eliminates overwintering habitat for pests. Rotating crops can also eliminate overwintering populations by removing their food source the next season.

Removal of weeds closely related to cole crops, including mustards such as field mustard (Sinapsis arvensis), removes an additional food source for these caterpillars. It also prevents them from establishing populations before the cultivated crops are transplanted into the field.

Planting floral sources near cole crops provides pollen and nectar sources for beneficial insects and can increase biological control. Buckwheat around the edges of fields can provide a good nectar source.

Intercropping can also contribute to pest population reduction. Intercropping is planting two or more crops side by side in a field, such as potato and broccoli. Intercropping often reduces pest abundance because it decreases the concentration of the food source within a field, making the field less attractive to colonizing insects.

Parasitoids: Cotesia rubecula is a small, dark parasitic wasp that attacks young imported cabbageworm caterpillars. This wasp lays an egg into a caterpillar, where it hatches into a larva and feeds on its host. The parasitoid kills the host caterpillar when it reaches its final developmental stage; then it emerges and forms a white pupa on the outside of the caterpillar (Figure 8). Although the parasitized caterpillar can feed on the plant until it reaches its final larval developmental stage, it dies before it can develop into a reproductive adult. 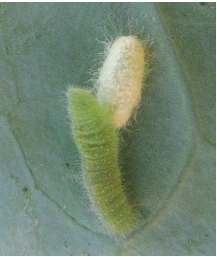 Diadegma insulare is another small parasitic wasp that attacks diamondback moths. They also develop inside their caterpillar hosts, and the adults emerge from the diamondback moth pupae. The caterpillar can feed and develop, but it cannot become an adult, and it cannot go on to reproduce.

Tachinid flies, such as Voria ruralis and Compsilura concinnata, are common parasitoids of the cabbage looper. As in the case of the Diadegma insulare, The caterpillar can feed and develop, but it cannot become an adult, and it cannot go on to reproduce. 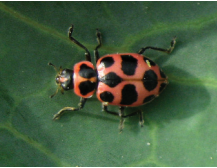 The beneficial insects described above can be conserved by avoiding the use of broad-spectrum insecticides, especially early in the season when pest pressure is low. Selective insecticides, such as products containing Bacillus thuringiensis (Bt), are safe to natural enemies and therefore recommended for use. Bt products are most effective when applied to small caterpillars. These insecticides have a one-day preharvest interval. There are Bt-resistant populations of diamondback moths, but at this time we have not confirmed any cases from Michigan. The other two caterpillar species are not known to develop resistance to Bt. Other insecticide options that allow natural enemies to survive include products that contain spinetoram, novaluron or methoxyfenozide. Spinetoram has a broad-spectrum knockdown action; it controls multiple growth stages and provides residual control.

Novaluron and methoxyfenozide are both insect growth regulators: they stop insects from developing through their normal life stages. These insecticides are more effective on small caterpillars. Methoxyfenozide has a one-day and novaluron a seven-day preharvest interval. Broad-spectrum insecticides are also available for use in cole crops. Many of these are applied to control other pests but will also be effective against caterpillars.