Many vegetable growers plant a winter cereal cover crop such as rye to prevent soil erosion by wind and water. Cover crops and forage rotation systems help growers build a healthy soil for healthy vegetables and reduce inputs while maintaining profitability. Growers are experimenting with a wide range of cover crop options. Here we discuss both benefits and potential problems with incorporating cover crops in vegetable systems.

1) Growers are facing a lack of rotational land (land-locked problems) due to increasing urbanization and the need to combat soil quality degradation associated with short rotations.
2) Growers must reduce use of pesticides, fertilizers and fumigants to protect the environment and profitability

Interest has recently grown in no-till or reduced-tillage systems for planting pumpkin into a winter cereal rye cover crop. No-till systems are also being tried with a hairy vetch cover crop. Cereal rye, hairy vetch or a mixture is established in the fall to grow over the winter. Cereal rye and hairy vetch should be seeded at 1-1/2 to 2 bu/A and 25 to 40 lb/A, respectively. In the spring, the cover crop is burned down with an herbicide or mowed, and the crop is notilled into the residues.

Growing pumpkins on the cover crop mulch reduces the need to wash dirt off pumpkins, and improves weed control.The mulch prevents weeds from germinating, a critical means of control later in the growing season when it is difficult to apply herbicides around sprawling pumpkin vines.

“Using hairy vetch in this no-till mulch system can reduce nitrogen fertilizer requirements by 110 pounds of nitrogen per acre in pumpkins,” says Tim Janssen, pumpkin farmer in Monroe Co. Research results indicate nitrogen from hairy vetch can be in the range of 50 to 100 lb. N/A in the following season.

Barriers to use of no-till include the expense of cover crop seeds and management of residues. Residues must be sufficient to reduce weed competition, but too thick a layer of residues prevents the soil from drying out and warming up in the spring and can plug planters. Obtaining good crop establishment in no-tillage systems can be a challenge. Careful placement of crop seed or transplanting of seedlings into cover residue is important.

Red clover frost-seeded into wheat grown as a rotation crop with potatoes requires a seeding rate of 10 to 15 lb/A. A mixture of cover crops such as rye, hairy vetch and mustard at 60, 20 and 10 lb/A, respectively, can be over-seeded into sweet corn or silage corn at the second cultivation. Frost-seeding a winter cereal crop is generally done in March or April, and over-seeding corn is done in late June or early July (or later, with a highboy tractor). Cover crops can be successfully established following a short season crop such as snap beans, cucumbers, wheat, oats or cereal rye. Planting systems include bulk spreading of seed with shallow incorporation or no-till drilling in late July or early August. Just before harvest of later crops, seed can be sown in August or September. Another option is to inter-seed with a no-till drill just after the crop is removed, e.g., into corn silage stubble or bean residue. The earlier the cover crop is established, the greater the growth and biomass produced. Early establishment of covers also prevents or delays winterkill.

Cover crop biomass will reduce nitrogen fertilizer requirements while improving the amount of organic matter inputs into the soil. Red clover nitrogen inputs for subsequent crops are substantial—around 70 to 130 lb. N/A. Soil microbial activity will also be improved, and this has been shown to enhance soil aggregation and reduce crusting in some soils. The substantial taproots produced by red clover will reduce the amount of deep soil compaction. 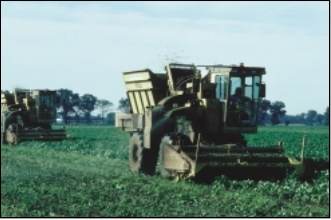 One drawback is the expense of cover crop seeds, especially legume seeds and many brassica species. When cover crops are seeded under an already growing crop, overcoming light, moisture and nutrient competition may require relatively high amounts of seed and improved seeding practices to shallowly incorporate the seed. An inter-seeded cover crop can interfere with cereal crop harvesting operations, e.g., legumes with winding growth habits such as hairy vetch. Although legumes are frequently effective at attracting beneficial insects, they are also occasionally associated with enhancing some pests, e.g., plant-parasitic nematodes.

Establishing a brassica species after a short season vegetable can produce a substantial amount of biomass above- and belowground before frost. Some brassica cover crops, such as Oriental mustard, may survive a milder winter but most frost-kill. A descriptive example would be planting oilseed radish or Oriental mustard in early August after a cucumber or snap bean crop. Oilseed radish was developed as a fodder root. After it is killed by frost, the biomass decomposes, leaving substantial biopores (holes) that look like a successful aeration operation in turf. Oilseed radish should be sown at a rate of 15 to 25 lb/A. 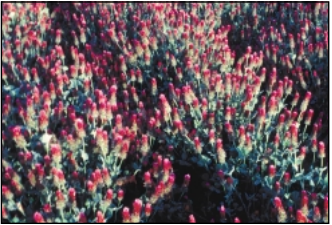 Cover crop biomass from brassica species may help suppress plant pathogens such as plant parasitic nematodes and root rots (Abawi and Widmer, 2000).The production of biopores also reduces surface compaction and may enhance proliferation of subsequent vegetable crop root systems. Oilseed radish grows better than legumes in moderately fine-textured and heavier soils and may be particularly suited to rehabilitating sites with inadequate drainage, surface soil compaction or soil borne disease problems. The relatively fast cycling time of brassica means that some varieties are adapted for use in a short window of time where other, slower growing covers may not produce sufficient growth. Further, the combined amount of above- and belowground biomass from oilseed radish is substantial. As shown in Figure 1, the weed suppression associated with oilseed radish can be highly effective. 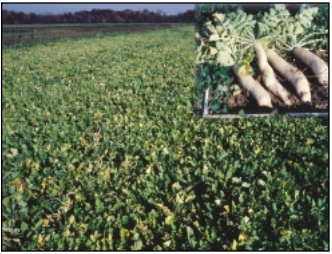 Brassica seed is generally more expensive than cereal rye. Almost all cover crops can become weeds because cover crops tend to be fast at establishment and competitive in growth habitat. Thus cover crops should not be allowed to go to seed. This especially holds true for some brassica species, such as mustards, which tend to flower and produce seed at a phenomenal rate.

Growers with sufficient land can dedicate an area to growing a summer cover crop such as sorghum/Sudan grass or alfalfa that is established in a vegetable system, but then chopped and not removed. This may be one of the most effective means to rehabilitate the soil through continual inputs of high quality residues above- and belowground. Cutting the stems of alfalfa, for example, will greatly enhance root death and regeneration belowground, as well as aboveground residues. Sorghum/Sudan grass should be seeded at 30 to 50 lb/A.

Dedicating land for one or two years to replace a vegetable crop with a summer cover is one of the most effective means of building soil organic matter. Summer cover crops are frequently called smother crops. They can be a timely intervention, markedly reducing problems from annual weeds such as lamb’s-quarters, pigweed and foxtails. A summer legume cover crop will fix substantial amounts of nitrogen, and legume, cereal and mixed summer cover crops are all effective at recycling soil nitrogen and reducing fertilizer requirements. In very cold climate areas, it may be necessary to incorporate a summer cover in the fall to allow time for mineralization before planting an early vegetable in the spring.

In the vast majority of cases, it is sufficient to incorporate a cover crop in the spring. To prevent soil erosion, it is critical to leave residues and, preferably, a growing cover crop over the winter. 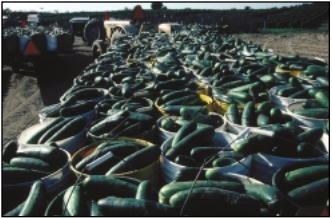 To replace a cash crop with a cover crop, growers must have sufficient land and obtain substantial benefits to subsequent vegetable crops. Establishment and cover crop input costs must be minimized. 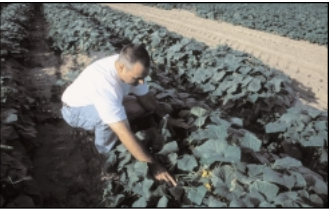 Depending on how cover crops are grown and how residues are managed, cover crops can be a major nitrogen fertilizer source or an important contributor to soil quality and organic matter. Usually one is favored at the expense of the other (Table 1). For example, if legumes are added to a cereal to grow a mixed cover crop and the cover crop is herbicide treated or mowed before incorporation, the cover crop will be easy to incorporate and will have substantial nitrogen benefits. Frequently this approach will increase yields of a subsequent vegetable crop.

Table 1. How to optimize nitrogen contributions or organic matter from cover crops.

However, mowing and herbicide applications in the spring will greatly reduce roots produced, as well as aboveground growth of the cover crop. This will limit the amount of organic matter incorporated. 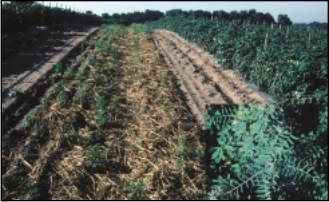 Recent research suggests that using herbicides and mowing or tillage before incorporation— an intensive residue management practice— enhances immediate nitrogen release. However, this results in decreased soil-building benefits compared with allowing cover crops to grow and incorporating them directly (Snapp and Borden, 2004).

A variety of cover crop options are available for growers in Michigan and the Great Lakes region. These include cover crops that reduce deep compaction in a coarse-textured soil, such as deeply taprooted alfalfa, red clover and yellow sweet clover. Crusting in moderately fine-textured soils can also be reduced by growing cover crops that produce a lot of biomass. Examples include cereal rye, sorghum/Sudan grass, or a mixture of rye and hairy vetch. Nitrogen benefits and weed suppression are key positive features of cereal mixtures with hairy vetch and brassicas such as oilseed radish and Oriental mustard. 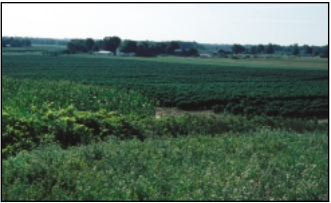 Alfalfa (foreground) is used as a soil rejuvenator in a crop rotation of corn, tomatoes, cucumber and alfalfa on a vegetable production farm in Berrien Co.

Evenings in the Garden: Christmas Tree Production in Michigan