Major symptoms of fire blight appear during warm, moist weather in late spring; however, larger cankered limbs may not die back until dry weather during mid-summer. Milky-white to amber droplets of bacterial ooze may exude from infected plant parts. Cambial tissue is killed in the region of the canker and will be brown or black instead of green. Bark in cankered areas is darker than surrounding tissue and may appear sunken. 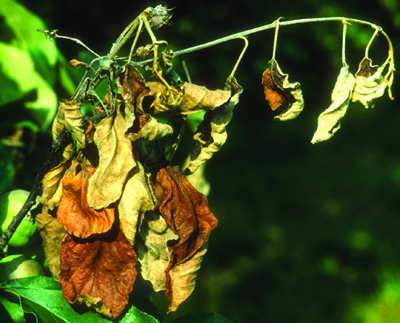 Branches appear as if scorched by fire; branch tips curve downward in a characteristic shepherd’s crook.

The bacteria overwinter in live tissue around the margins of fire blight cankers. Once temperatures are above 65°F, bacteria resume growth, and the disease can spread rapidly. Insects pollinating blossoms, rain splash, or infested pruning tools can all serve as means of spreading the bacteria. 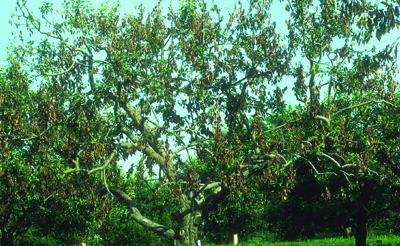 Print a PDF of this page: Fire blight