Using fire to control weeds in organic farming systems shows promise for reducing weed populations without herbicides. A carefully directed flame fueled by natural gas or liquid propane (LP) increases the temperature within the weed, causing cells to rupture and effectively killing weeds while doing little damage to the crop (Fig. 1). Flaming disrupts weed growth through heat, so it is important to flame when the plants are dry and wind speed and direction are favorable. Both moisture and wind can lower the heat from the flame, reducing the effectiveness of the flaming application (Mutch et al., 2005). 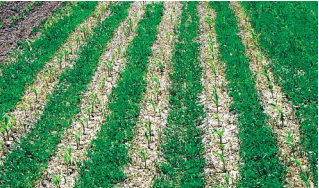 Figure 1. Organic corn that has been flamed for weed control. Flaming kills weeds while doing little damage to the crop.

Some farmers have found that flaming controls certain weeds (lambsquarters and pigweed, for example) better than others (mustards or common ragweed) (Mutch et al., 2005). Flaming is more effective in a crop such as corn, where the growing point is below the soil surface, than in crops such as soybeans, where the growing point is aboveground. The authors of this bulletin do not recommend using flaming to control weeds in soybeans.

Exposing a weed seedling to flame for 1/10 of a second (Row Crop, 2007) is usually enough to ensure control, although this may vary with weed type and size (Fig. 2). Smaller, sensitive plants are more susceptible to heat than larger, more mature plants. Applying the flame when the crop plants are larger than the weeds provides for optimal control. After an effective flame application, weed leaves look dull, and it is easy to press a visible fingerprint onto the leaf surface. 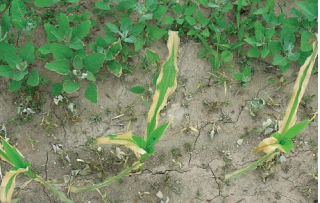 Figure 2. Closeup view of burned common lambsquarters in the corn row. The burned corn leaves did not result in a reduced corn yield because the corn’s growing point is below the ground.

A Michigan State University W.K. Kellogg Biological Station (KBS) study examined the effectiveness of postemergence weed control by cross-flaming (Fig. 3). Cross-flaming burners are set at an angle 30 to 60 degrees from horizontal and 4 to 10 inches away from and perpendicular to the crop. Gas pressures are typically operated between 25 and 70 pounds per square inch (PSI). 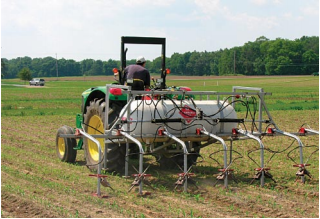 Figure 3. Cross-flaming in organic corn. In this system of flaming, the torches are generally staggered while flaming so that each does not interfere with the flame from the opposite burner.

Torches are staggered to limit interference between flames. This allows the heat to be directed into the crop from both sides. This provides more complete coverage and allows for greater application speeds, ranging between 2.5 and 5 mph. In general, flame application LP gas usage averages 8 to 10 gallons per acre, depending on application speed (Sullivan, 2001). 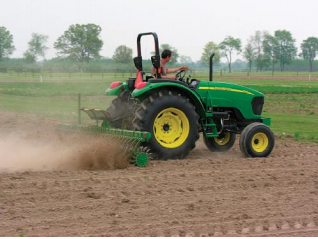 The three weed control treatments were evaluated each year in early- and late-planted corn. Prior to planting, plots were tilled three times using the methods given in Table 2 as required to provide consistent seed beds.

Figures 5 and 6 summarize the timing, treatments, weed control operations, mean yield and weekly precipitation for the three treatments of early- and late-planted corn in 2005 and 2006. 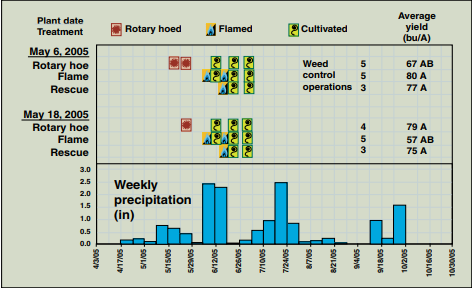 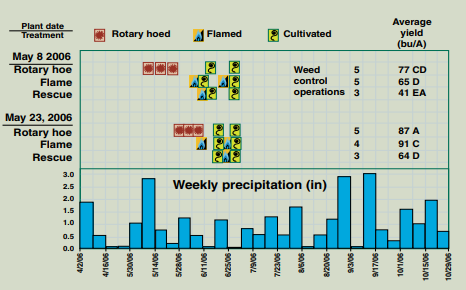 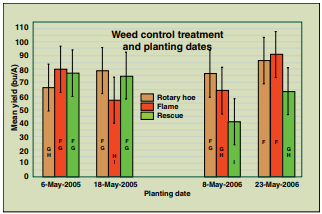 Figure 7. Weed control treatment effects including year and planting date interactions (means with the same letter are not significantly different at the p < 0.025 level; LSD @ 0.025 = 16.5).

In 2005, the total precipitation from April through October was 15.5 inches. As shown in Figure 5, the spring prior to both the early and late planting dates was dry, as was the period from late July to early September. This lack of moisture resulted in reduced weed emergence. All three weed control treatments provided similar weed control under these dry growing conditions. However, corn that was flamed late in 2005 had a lower yield than corn with all other 2005 treatments except early rotary hoeing. Late flaming under the dry conditions may have led to some incidental damage to the corn crop. The reduced number of weed control operations (three versus four or five) appears to provide an advantage for the rescue treatment under dry growing conditions.

In 2006, there were no statistical differences between mean yields for corn treated by flaming and rotary hoeing within planting dates. Rescue mean yields were statistically different from both flaming and rotary hoe corn yields at each planting date. The mean yields under the rescue treatments were 25 to 30 bushels per acre less than the yields of corn receiving the rotary hoe and flame treatments. In 2006, the total precipitation from April through October was 27.7 inches and evenly distributed through the growing season (Fig. 6). With adequate moisture, the advantage of early weed removal is evident in the increased yields for the flame and rotary hoe treatments versus the rescue treatment.

On a well-drained sandy loam soil, corn yields were similar when weeds were controlled with rotary hoeing or flaming treatments (Figure 7). Corn yield was reduced when late “rescue” weed control was attempted in wetter years.

Flaming offers a number of advantages over the more widely used organic weed control practice of rotary hoeing. Rotary hoeing can be impractical in shallow or dense claypan soils; flames can be applied in systems with any soil type or depth. Rotary hoeing also depends on dry soil conditions; flame application is not as affected by weather variability. Flaming is also less invasive, preserving soil structure and leaving crop roots unharmed.

Though there are many benefits to applying flames to control weeds in organic systems, there are also downsides. Optimal weed control often requires multiple flame applications, with little or no residual weed control effects. Flame applications must be timed precisely to effectively kill weeds, and weeds that emerge with the crop are particularly difficult to control without damaging the crop.

The rising cost of propane gas is another factor to consider when deciding whether to add flaming to a weed management system. Conducting a cost/ benefit analysis is important to see if flaming is a financially viable option for an individual operation.

There are many considerations to take into account when deciding whether to use flaming as a weed control practice in any farming system. Farmers should carefully evaluate the positives and the negatives before integrating a flame-applied weed control approach into their operations.

The authors would like to thank Karen A. Renner and Christy L. Sprague for their invaluable comments in the review of this bulletin.

Transitioning from Conventional to Organic Production