Soilborne fungal pathogens are widespread throughout dry bean and snap bean production areas. They can affect quality as well as yield. Pathogens that predominate and limit production differ from one bean-growing region to another. Fusarium root rot (caused by Fusarium solani [Mart.] Sacc. f. sp. phaseoli [Burk.] W.C. Snyder & H.M. Hans.) is one of the most prevalent soilborne bean diseases in Michigan, sometimes as part of a complex with Rhizoctonia solani and Pythium spp. Root rot can cause severe yield losses, especially when adverse environmental conditions (such as soil moisture and soil compaction) persist after planting and through flowering.

Unlike other root-rotting diseases, Fusarium root rot does not cause seed rot or damping-off of seedlings. Symptoms do not appear until two or three weeks after planting. The first symptoms are narrow, long, red to brown lesions on the stems; lengthwise cracks often develop (Fig. 1). Lesions extend down the main taproot, which may shrivel, decay and die. The symptoms in some cases extend up the hypocotyl to the soil surface. Clusters of fibrous roots (lateral roots or adventitious roots) commonly develop above the shriveled taproot (Fig. 1). These roots can compensate to some extent for dead roots, and under ideal growing conditions they will limit aboveground symptoms. Infected plants are frequently stunted, grow slowly compared with healthy plants, and are light green to yellow. Poor root function deprives plants of nutrients and water, which can result in uneven plant stands and reduce yield. 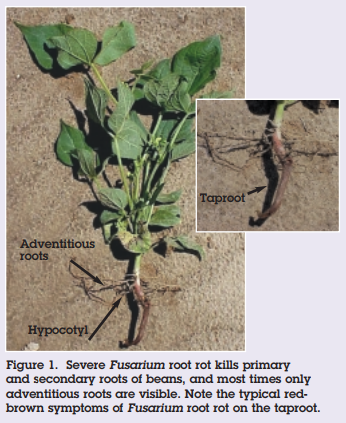 Factors that reduce root growth increase susceptibility to Fusarium root rot, particularly in soils where beans were grown previously. The severity of root rot depends on cultural and climatic factors such as plant spacing, soil moisture, depth of planting and stress from low or high temperature. Soil factors are very important as well, such as the presence of hardpan layers, low fertility, pesticide or fertilizer injury, flooding or extended drought, and soil compaction that restricts root growth. The effect of Fusarium root rot is most apparent during flowering and early pod set.

There are no cost-effective chemicals for Fusarium root rot control. Seedling root health can be protected, and damping-off prevented, through seed treatments.

Fusarium solani can survive in soil for many years as a resistant spore (the chlamydospore). The host range of Fusarium solani is relatively narrow — it is restricted to roots and residues of beans and related species such as soybean. The pathogen is moved around the field by wind, rain, irrigation water, farm implements, crop residues, and any other agent or process capable of moving soil. With each successive crop of beans, the pathogen population increases and the disease can become more severe. 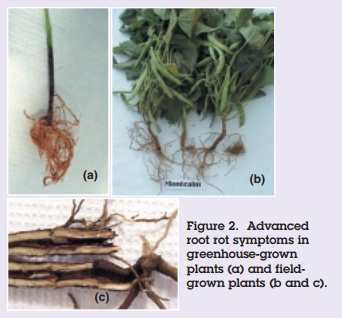