How the Climate Affects Forests (E3221)

The Earth’s climate is changing. Many trends have been tracked, some reaching back tens of thousands of years. Trees and forests are sensitive to a range of environmental conditions, including the climate. In addition to climate, there are other factors to which forests respond, such as human activities and management, biological relationships, and invasive pests. All of this creates a dynamic within which forests grow and change. How much do climate factors need to change before forests change in a significant way? This question is almost impossible to answer, although there is no doubt about impending change. Climate influences will vary between different forest types and will be complicated by ecological complexities.

Historical data goes back about one hundred years for some climate measures. There are a variety of ways climate factors can be inferred, such as pollen cores in bogs and the study of tree rings. Globally, some measures go back 100,000 years. Records over the past 100 years demonstrate some remarkable trends that cannot be attributed to natural causes. These trends vary somewhat across regions, but the overall picture points to a warming, more erratic climate. Across the entire state, Michigan’s average annual temperature increased over 2.4 ◦F from 1895-2013.1 Winter temperatures have risen faster (3.3 ◦F) during the same time, particularly winter low temperatures (3.7 ◦F). Extreme high temperature periods have increased across the Midwest, including higher night temperatures and higher humidity. Average annual precipitation has increased by 3.5 inches, with the greatest increases in the summer and fall.  There is variation across the state, with some areas experiencing significant droughts. The interaction of temperature, precipitation, and seasonality is important to forests. Heavy rainfall events (+3 inches in a single event) have become more frequent in Michigan, as well as across the Midwest. As a greater proportion of precipitation is delivered in large events, there can be longer periods between rain events. Recent severe events, such as the burst of tornadoes across southern Michigan in 2012 and the northward migration of tornadoes suggest change but long-term records for these phenomena are limited.

How does the climate affect forests? There are many direct and indirect ways. An example of a direct effect might be changes in phenology, for example when trees leaf-out in the spring or when flower buds open. An indirect effect might be the damage done by an insect whose range expands due to warmer winters. Many forest processes are regulated by photoperiod and less driven by climate change. Other processes are influenced by temperature and other weather variables. The timing of leaf expansion is a common example. Dr. Andy Burton (Michigan Technological University) has observed that sugar maple growing season length has increased by 11.5 days over the past 20 years across a range of sites in Michigan. Forests are ecological systems that may be slow to respond to climate change. Much of the change is not predicted to occur until the middle of this century. In particular, mature trees are long-lived organisms and may not be good indicators of climate change. However, tree regeneration patterns may be early indicators, especially along ecotones of change (e.g. forest-prairie, hardwood-boreal). Regeneration of red maple and black ash is occurring in certain boreal forests, which is not typical. Studies are underway examining changes across ecotones in Michigan, Wisconsin, and Minnesota. More mobile taxa, such as birds and mammals, have experienced expansions in ranges. These wildlife species serve important roles in the distribution and success of forest regeneration. Moose populations have declined across most of their southern range. Warmer temperatures are an important driver of that dynamic. How the Climate Affects Forests Forest Management in a Changing Climate Forests are affected by the local climate, in addition to being affected by short-term weather events. Michigan’s climate has been changing over the past several decades, and continued climate change could result in many impacts to forests in our state. 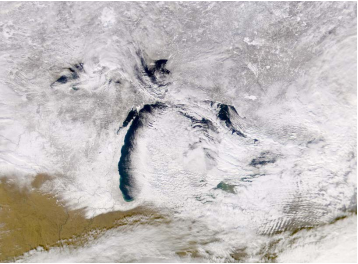 Michigan's climate is influenced by the Great Lakes. Forests in Michigan are adapted to areas of lake-effect snowfall and characteristic winter weather. Image courtesy the SeaWiFS Project, NASA/Goddard Space Flight Center, and ORBIMAGE.

Michigan’s climate is expected to grow warmer and more variable, with increasing drought stress in late summer. Winters are expected to warm faster than other seasons. Rainfall shows an increase in spring, but a possible decrease in summer. However, precipitation projections vary considerably among models and across regions. Warmer summer temperatures and less rainfall can lead to more severe droughts. Increased CO2 levels tend to boost forest productivity but this effect may be limited by water availability and other environmental conditions. Growing seasons are expected to continue to lengthen. Table 1 highlights some of the projected climate-related impacts for Michigan forests.

Models based from a variety of sources are used to help predict future forest changes. Models are also useful to determine how different variables interact and which variables may be more important when answering a particular question. Model development and interpretation is complicated. A single tree species or forest type may “behave” differently according to different models or climate inputs. Effects on more complex climate-driven factors are less certain (wildfire, invasive species), but we have greater confidence in situations where multiple model projections agree and are reinforced by manager expertise.