What is nitrous oxide and why is it important?

Nitrous oxide (N2O) is an important greenhouse gas that contributes to climate change. Because it has a long atmospheric lifetime (over 100 years) and is about 300 times better at trapping heat than is carbon dioxide, even small emissions of N2 O affect the climate.

Nitrous oxide is produced by microbes in almost all soils. In agriculture, N2O is emitted mainly from fertilized soils and animal wastes—wherever nitrogen (N) is readily available. In the United States, agriculture accounts for approximately 8 percent of all greenhouse gas emissions but contributes about 75 percent of all N2O emissions linked to human activity. Of the three major greenhouse gases emitted naturally— carbon dioxide, methane and N2O—N2O is the most important in all field crops but rice. 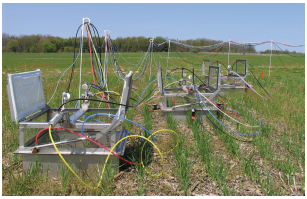 Nitrogen applied in excess of crop needs is particularly susceptible to loss. Though the amounts of carbon and oxygen available in soil also affect microbial N2 O production, the presence of inorganic N usually matters most.

Because of the strong link between inorganic N in the soil and N2O production, some emissions are unavoidable. But management that prevents the buildup of inorganic N reduces N2O emissions. Numerous management strategies can keep soil N in check and minimize N2O emissions. Many of these strategies also help to keep other forms of N from being lost, including nitrate and ammonia. In general, practices that reduce N2O emissions increase N use efficiency (NUE), which keeps more of the added N in the crop.

The four main management factors that help reduce N2O emissions from applied N fertilizer are commonly known as the 4R’s: 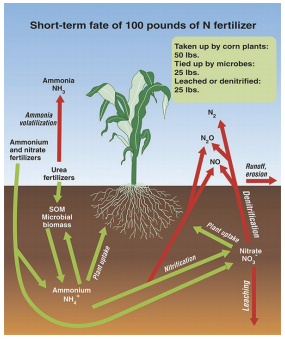 Nitrogen availability — the amount of inorganic N in soil at any given time — is the single best predictor of N2O fluxes in cropped ecosystems. Michigan State University researchers have shown that N2O emissions are especially high when N fertilizer is applied at rates greater than crop need. The emission rate grows exponentially with increases in fertilizer rate, so at higher rates of fertilizer application N2O emissions increase disproportionately, particularly after crop N demands are met.

Recent fertilizer recommendations for Michigan corn crops provide farmers an improved capacity to predict crop N needs. These recommendations are based on dozens of field fertilizer response trials that define the maximum return to N rate (MRTN), which is the rate at which adding any additional N is not repaid by higher yields. This rate is typically a bit lower than the agronomically optimum N rate (AONR: the maximum level to which crops respond) by a margin that depends on the price of fertilizer vs. the price of grain. Typically, using the MRTN approach rather than the older yield-goal approach allows farmers to realize N fertilizer savings. Because both N2O emissions and nitrate leaching increase exponentially when N fertilizer exceeds crop N demand, these N savings also can result in substantially lower losses of N2O and nitrate.

Better estimating the amount of fertilizer N needed by a crop is an effective way to reduce N2O emitted from cropped fields.

Fertilizer formulations also can alter N2O emissions in some cropping systems. For example, in corn-soybean rotations, emissions can be two to four times greater following anhydrous ammonia than following urea ammonium nitrate or broadcast urea. The trend toward using more urea in corn in the United States may help reduce N2O emissions.

Fertilizer additives can also reduce N2O emissions. Nitrification inhibitors such as nitrapyrin, which delay the microbial transformation of soil ammonium to nitrate, can delay the formation of nitrate until closer to the time that plants can use it. Likewise, urease inhibitors can delay urea fertilizer’s dissolving in soil water. Slow-release formulations such as polymer coatings can have the same effect. For example, in irrigated no-till corn, N2O emissions can be reduced by using polymer-coated urea or a combined nitrification and urease inhibitor with urea ammonium nitrate, compared with using either urea or urea ammonium nitrate alone. As yet, however, there have been too few field studies to fully judge the benefit of additives or fertilizer formulations for N2O emissions.

Applying N fertilizer when it is most needed by plants can also help reduce N2O emissions. Applying the majority of fertilizer a few weeks after planting rather than at or before planting increases the likelihood that the N will end up in the crop rather than be lost to groundwater or the atmosphere. Sidedressing N fertilizer at the V-6 stage in corn, for example, can increase N use efficiency— especially if application is preceded by a pre-sidedress-nitrate test (PSNT) to allow residual N to be taken into account.

Adding N fertilizer in the fall or spreading manure on frozen fields often leads to especially large nitrate and N2O losses. In such cases, fertilizer applications are way out of sync with the timing of crop needs. 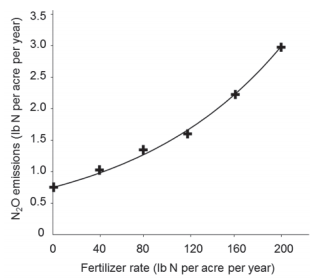 How can we best reduce nitrous oxide emissions from field crop agriculture?

Following these practices will, in general, result in more N in the crop and less lost to the environment.

As previously mentioned, even small amounts of N2O in the atmosphere can greatly affect the climate. Because of this, there is great interest in reducing emissions of N2O from various economic sectors, including field crop agriculture. By using the N management practices described in this bulletin, farmers can reduce N2O emissions from their fields without reducing crop yield or economic return. This is the basis for programs offered through carbon credit organizations in the United States that use the marketplace to pay farmers for these reductions. 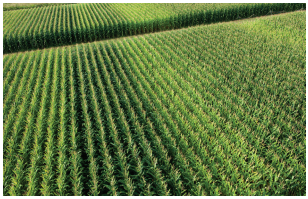 Most straightforward and accessible programs use a methodology that estimates N2O emissions reductions on the basis of the reduction of N fertilizer rate. This methodology is based on data collected on commercial Michigan farms and was developed primarily by Michigan State University scientists. It allows farmers to convert their N2O emissions reductions to equivalent units of carbon dioxide. These can then be traded as carbon credits on environmental markets to generate income.

Reductions in N fertilizer input without crop yield loss can best be achieved through the use of an integrated approach that uses corn and fertilizer prices to estimate recommended N rates, and improves management of the formulation, timing and placement of N fertilizer.

These changes in management practice, in combination with programs that pay for the environmental benefits they deliver, help to ensure the long-term sustainability of field crop agriculture, N use, and a stable climate.