Wheat grows best when the soil pH is between 6.0 and 7.0. Growing wheat at a pH below 6.0 often results in magnesium (Mg) deficiency, slower mineralization of organic nitrogen (N), reduced availability of Phosphorus (P), and increases the possibilty of aluminum (Al) and manganese (Mc) toxicity. When wheat is grown on soils above a pH of 7.0, Mn deficiency may occur. Wheat land should be limed to a pH of 6.5. Where other crops are grown in rotation, lime to the optimum pH for the most demanding crop.

Nitrogen is usually the most limiting nutrient for wheat production. An inadequate N supply can greatly reduce yield and profit. Too much N can result in lodging, decreased yields and reduced profits. Determining the optimum rate of N fertilizer is the key to maximum economic yields. Soil tests for measuring N availability to wheat are not adapted for routine use in Michigan. As a result, information on soil texture, organic matter level and yield goal is used to select the optimum amount of N fertilizer to apply.

Sandy soils do not have the same yield potential as finer textured lakebed soils because of their inherent low water-holding capacity and usually lower organic matter level. Soil organic matter is important because of the amount of N mineralized or released each year. On finer textured soils, drainage plays an important role in selecting the appropriate yield goal. Poorly drained fields with inadequate title drainage have a lower yield potential than well tiled soils. They often become waterlogged and can lose a large portion of their N to denitrification. Management - including the timeliness of tillage and planting operations, variety selection, seed quality and pest control - also affects the yield potential. Before choosing the amount of N to apply, select a yield goal that is realistic and achievable at least 50 percent of the time. If the goal is seldom achieved, you will be overfertilizing with N and creating the potential for N contamination of surface and groundwater.

Table 1 gives N fertilizer recommendations for wheat based on research and realistic yield goals for Michigan. Apply no more than 25 lb of N in the fall.Excessive N in the fall can cause abundant growth that increases the probability of disease. Apply the remainder early in the spring before the ground thaws or stems elongate. Do not apply fertilizer on frozen sloping land where runoff can easily enter surface water. Where slopes exceed 6 percent, wait until the soil has thawed before making spring application of N fertilizer.

Research has shown that split applications improve yields in certain years. Periods of above normal rainfall during April and May favor split applications because of N loss from leaching and denitrification. Because there is no way of predicting this kind of season, few farmers elect to split their spring application of N. One of the disadvantages of splitting the N application is that dry conditions after the last application may result in poor use of the N. Another problem with split applications - soil conditions may severely delay or prevent the second application.

In general, all N fertilizer sources are eqaul, if applied properly. Early spring topdress applications of urea (46 percent N), ammonium nitrate (33 percent), urea-ammonium nitrate (UAN) solutions (28 percent N) and ammonium sulfate (21 percent) usually give equal results. Ammonium nitrate and ammonium sulfate and preferred N sources for a second spring application just before stem elongation if conditions are warm and dry. Applications of urea and UAN made during warm and dry conditions may result in some ammonia volatilization loss. If you use UAN solutions after green-up, use no more than 80 lb of N per acre to avoid excessive foliar burn.

Ammonium sulfate has become popular in some regions of the state and is being promoted as a source of sulfur. Michigan State University (MSU) wheat trials with ammonium sulfate, however, have not shown any benefits from the added sulfur. Its disadvantages are its low analysis and greater cost. Ammonium sulfate is also more acid than other sources of N, so it is less desirable on acid soils. On soils with high pH (7.0), the extra acidity may have some minor benefits, such as improve manganese availability.

Anhydrous ammonia use has been successful when applied in the fall and kniged in at a spacing of 15 inches or less before planting. Fall applications of anhydrous ammonia in MSU trials, however, have not been shown to be as good as spring topdress applications. Too much N in the fall may also lead to excessive growth and increased disease. Warm soil conditions after application may also lead to the rapid conversion of ammonium N to nitrate N, which can be lost by leaching or denitrification before the crop can take it up. Using nitrification inhibitors with anhydrous ammonia applied in the fall has helped to prevent some N loss in MSU trials, but the benefits of spring topdress N without nitrification inhibitors were superior. 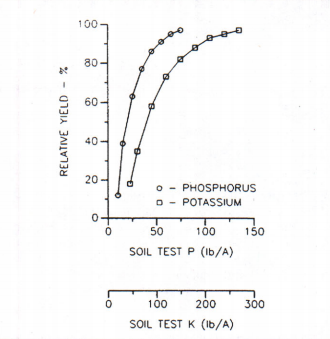 Figure 1. Relationship between expected wheat yield and soil test levels of phosphorus (P) and potassium (K), assuming no phosphorus or potassium fertilizers are applied (yield potential is 80 bushels per acre).

Soils should be sampled to a depth of 9-10 inches to determine lime, phosphorus (P), potassium (K), and secondary and micronutrient requirements, all of which must be applied before planting. Broadcast these nutrients along with the 10 to 25 lb of N per acre needed for stand establishment and initial fall growth. You can increase the efficiency of P uptake by banding it through the grain drill at planting. 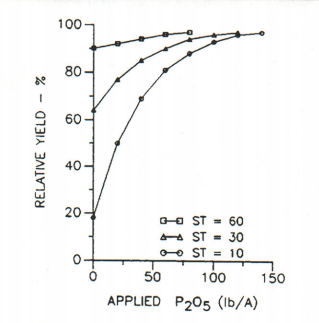 Typical yield response curves to soil test P and K are shown in Fig. 1. A P soil test of 80 lb/ A and a K test of 250 lb / A are adequate for optimum yields without the addition of P and K fertilizers.

Typical response curves due to added P and K fertilizer are shown in Figs. 2 and 3, respectively. Fig. 2 shows that as the soil test (ST) for P increases from 10 to 60, it takes smaller amounts of P fertilizer to reach the 80-bushel yield potential. The loss in yield due to inadequate fertilizer can also be predicted from these curves. For example, a farmer who has a soil test of 10 and uses 50 lb of P2O5 instead of 140 would obtain approximately 71 bushels instead of 78 bushels (a loss of 7 bu/A). The loss for underapplying P fertilizer is not devastating, but it does represent an exonomic loss to the farmer ($9 per acre if we assume $3 per bushel of wheat and 20 cents per pound of phosphate). Overapplying P also results in an economic loss to the farmer and increases the potential for P contamination of surface water should runoff or erosion occur.

Simialr relationships have been developed for K fertilization. MSU recommendations for K are slightly different for sandy soil than for fine-textured soils because of the latter soil's greater ability to hold K. On sandy soils, less K fertilizer is needed to meet crop requirements at low test levels, but at medium to high soil test levels, more K fertilizer is needed because sandy soils have less storage capacity for K than fine-textured soils. As a result, K soil test levels on sandy soils tend to fluctuate much more from year to year. Fig 3 shows the response of wheat on soils with various yield potentials. Soils with inherent potential to produce large yields require a higher soil test to obtain optimum yields than soils with a lower yield potential. 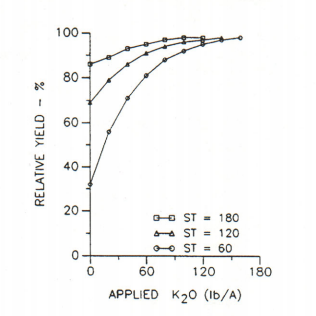 Placement of Phosphorus and Potassium

Secondary and micronutrients are essential for optimum growth of wheat. These nutrients, however, are usually well supplied in Michigan soils. Well limed soils usually have adequate calcium, magnesium and sulfur. Atmospheric contributions of sulfur each year supply adequate sulfur.

Manganese (mn) is the most likely micronutrient to be needed in Michigan. Manganese deficiency occurs on organic soils (30% organic matter) and on lakebed soils with a high pH. Four to 6 pounds of elemental Mn per acre may be needed for soils with a pH of 6.5 to 7.0, and 7 to 10 pounds per acre when the soil pH exceeds 7.0. A soil test for Mn is recommended whenever the soil pH is above 6.2. Apply manganese fertilizer in a band or in contact with the seed for best efficiency. The preferred source of Mn is manganese sulfate.