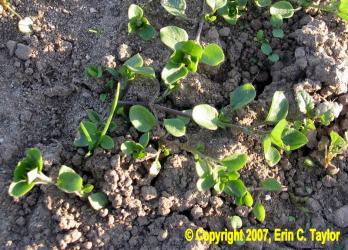 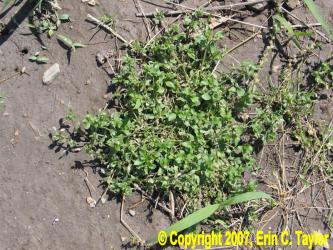 Winter annual. Common chickweed emerges in late summer (some emergence early in the spring), becomes dormant over the winter, sets seed in the spring/ early summer and dies. Can flower within a month and set seed within 2 to 3 months.

Most seedlings emerge from soil depths of less than 1". with a maximum emergence depth of 2".

Production Average: Common chickweed seed production ranges from 750 to 30,400 seeds per plant, with an average of 25,000 seed per plant.

Longevity: Common chickweed seed is moderately persistent because it takes 3 years for the seed bank to be reduced by 50% and about 18 years to deplete the seedbank by 99%. In two studies, 5 an6 percent of the seeds remained viable after 10 years.

Dormancy: Common chickweed has a short after ripening if the seed; accounts for little seed dormancy. Bright daylight reduces germination. 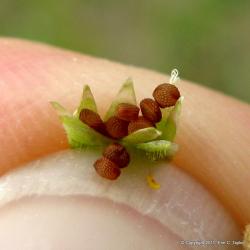 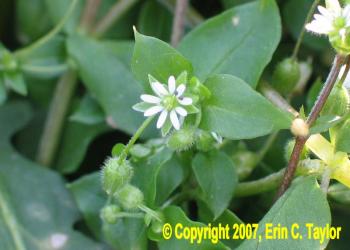 Competitiveness:
Common chickweed is fairly competitive with small grains heavy infestations can cause a 66-80% yield loss in barley.

Preferred Soil / Field Conditions:
This weed likes high fertility soils and thrives in moist soils rich in nitrogen. Common chickweed is an efficient nitrogen scavenger- if leftover nitrogen is available, there will be more chickweed growth in the fall. This weed prefers neutral soils and dislikes acidic soil conditions.

Tillage: Common chickweed is controlled by tillage, particularly in the fall.

Application timing and effectiveness: In no-till production common chickweed is easily controlled in fall and early spring when plants are small. It becomes more difficult to control under cool conditions and when plants become larger and form a dense vegetative mat (size and coverage issues).