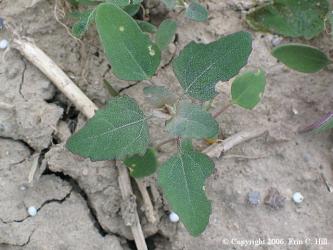 C. lambsquarters emergence from soil depths of less than 1 inch.

Dormancy: As burial depth increases, seed dormancy increases. Conditions to break dormancy include high levels of soil nitrate, exposure to light and fluctuating temperatures. Seeds on a single plant have different dormancy requirements. This is one reason why lambsquarters seeds is so persistent in the soil.

About 20% of lambsquarters seed decayed in the first winter when buried 1 to 4 inches below the soil surface. Soil moisture ans soil microorganisms are needed to decay weed seeds.

Tillage: Tilling at night (dark tillage) will reduce lambsquarters emergence by 30 to 70%.

Rotary hoeing: When common lambsquarters is less than 1/4" tall it is easily controlled with a rotary hoe.

Flaming: At heights of 1/2" or less, flaming is an effective way to control common lambsquarters.

Planting date: Tilling in the spring and planting later (mid-May) will reduce lambsquarters infestations because many of the plants will have emerged and been controlled by tillage.