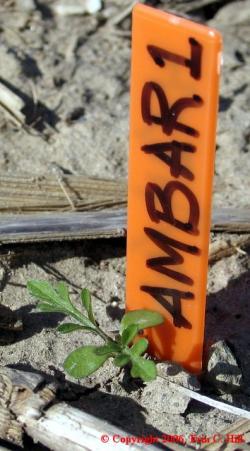 Emerges from soil depths of 2 inches or less.

Longevity: The seed of common ragweed has very little to moderate persistance in the soil. It takes less than 1 year for the seed bank to be reduced by 50% and about 10 years for 99% depletion.

Competitiveness:
Common ragweed is one of the more competitive weed species. Ten to 22 percent yield loss in dry beans with one common ragweed plant per 1.5 ft of row. A 30% reduction in yield in soybean was observed from a common ragweed density of 2 plants per 10 ft^2.

Preferred Soil / Field Conditions:
This weed grows well on poorer soils. It does not thrive on soils high in N, P, or K. 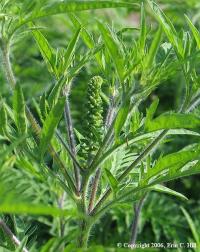 Rotary hoeing: Common ragweed is easily controlled with a rotary hoe when less than 1/4".

Flaming: Flaming is not an effective method of controlling common ragweed.

Planting date: Tilling in the spring and planting later (mid-May) will reduce common ragweed infestations because many ragweed plants will have emerged and been controlled by tillage.