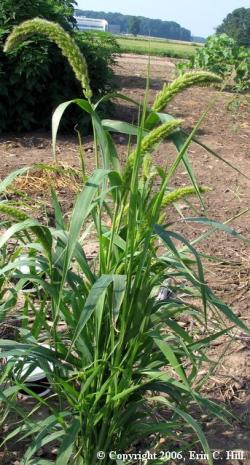 Summer annual. Emerges in the spring sets seed in late summer/fall and dies.

Giant foxtail emerges after common lambsquarters and the ragweeds. Ten percent emergence is observed between 150 and 300 GDD (base 48 F); 25 percent by 294 GDD (base 50 F). The period of emergence is lengthy.

Giant foxtail emerges from soil depths of less than one inch.

Longevity: Giant foxtail seed is moderately persistent. It takes 5 years for the seedbank to be reduced by 50% and about 30 years to deplete the seedbank by 99%. Our experience with giant foxtail has shown that it has very short seed longevity. Many seeds germinate the first year after seed is produced, and emergence in the second and third years is very limited.

Dormancy: The seed of giant foxtail is less dormant when the seed is located in the upper inch of the soil profile. As burial depth increases, seed dormancy decreases. 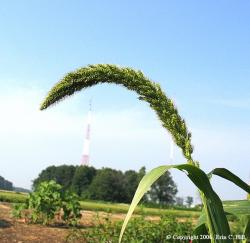 Decay: About 25% of giant foxtail seed decays in the first winter when buried 1-4" in the soil. Soil moisture and soil microorganisms are needed to decay weed seeds.

Tillage: Night tillage has no effect on giant foxtail emergence.

Flaming: Grasses are more difficult to control with flaming than small broadleaf weeds.

Crop rotation: 2 years of alfalfa in the rotation will control giant foxtail. Few seeds will persist to germinate when alfalfa is rotated out to the corn or another crop.

Planting date: Adjusting planting date has little effect on giant foxtail competition becuase foxtail has a lengthy period pf emergence and is is not a n early or late emerger.