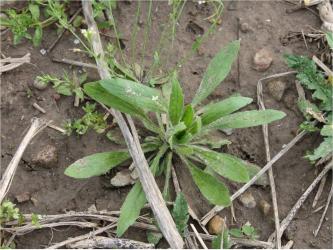 Winter/summer annual. Horseweed emerges in fall or early spring as a rosette. Fall-emerged horseweed becomes dormant over the winter, plants start to bolt in April/May, begin to flower in July, set and disperse seed from August to October and die. Fifty-nine to 91% of fall-emerging plants survive the winter.

Horseweed is primarily a fall emerger. In one study, 5-32% of total emergence happened in the spring.

Production Average: An average of 200,000 seeds are produced per horseweed plant.

Dispersal Mechanisms: Seeds can be dispersed long distances by wind. There have been reports of 12,500 and 125 seeds per yd^2 at 20 and 400 feet, respectively, away from the seed source.

Longevity: Seed longevity of horseweed has not been established. However, there is one report of finding viable seeds in the seedbank of a 20-year-old abandoned pasture.

Dormancy: Horseweed seeds are not very dormant. Up to 86% of the seeds can germinate immediately upon seed shed. As burial depth increases, seed dormancy increases. 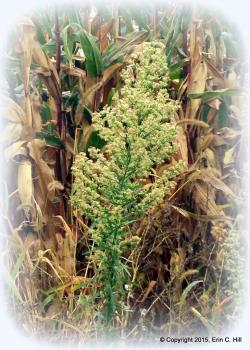 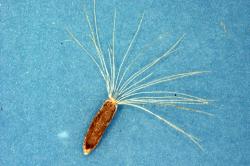 Little information is available on the competitiveness of horseweed. An estimated 83% of soybean yield is lost from 105 plants per 10ft^2. Severe infestations have reduced sugar beet yield by 64%.

No information is available at this time.

Tillage: Horseweed is controlled by tillage, but is primarily a weed in no-till systems.

Crop rotation: Small grains and crops planted in narrow rows and high populations in the rotation suppress horseweed because horseweed is not very shade-tolerant.

Application timing and effectiveness: Horseweed is effectively controlled in the rosette stage. It is difficult to control once plants begin to bolt. There are known resistant populations to ALS-inhibitors and glyphosate in the United States.

For more specific information regarding control with herbicides go to the Horseweed section of the Weed Control Guide for Field Crops in the Publications section.