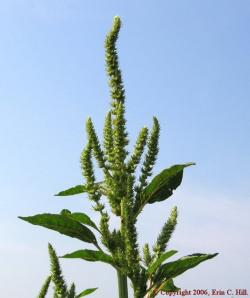 Emergence:
The emergence of these pigweed species occurs after common lambsquarters and the ragweeds. Ten percent emergence occurs between 150-300 GDD (base 48 F).

Pigweeds emerge from soil depths of less than 1".

Longevity: Pigweed seed is moderately persistent. It takes 3 years for the seedbank to be reduced by 50% and about 20 years to deplete the seedbank by 99%.

Dormancy: The pigweeds are less dormant when seed is located in the upper inch of the soil profile. As burial depth increases, seed dormancy increases.

Competitiveness:
Pigweeds are less competitive than velvetleaf and common lambsquarters.

Rotary hoeing: Pigweeds are easily controlled with a rotary hoe when less than 1/4" in height.

Flaming: Flaming is very effective on small pigweed plants (less than 1.5" in height).

Planting date: Planting early in the spring (early May) will reduce pigweed infestations becuase pigweed will emerge after the crop has emerged and will be less competitive with the crop.

Application timing and effectiveness: Because redroot pigweed is a later emerging weed it is usually not the driver weed that has to be watched so it doesn't exceed the maximum size for effective postemergence control.