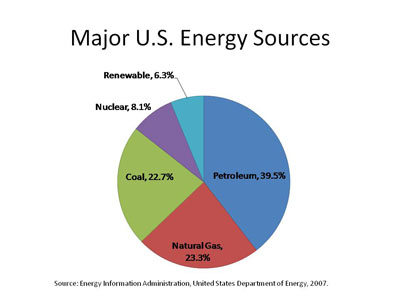 The United States represent about 5% of the total world population, yet we consume 21.8% of the total energy supply. American's insatiable appetite for energy has some people saying that our economy, national security and even our way of life could be in harm's way.

Energy consumption in the United States has nearly doubled in the last 40 years. Our major energy sources include:

The major sectors of use include heating, air conditioning and transportation fuels. One-third of the total energy we use is imported from other countries. It is estimated that in 2007, we will use an average of 20.8 million barrels of petroleum per day. We will produce an average of 5.1 million barrels per day. This means that we will import 75.5% of our energy derived from petroleum.

Ethanol has been touted has a renewable energy source to help offset some of the import needs for petroleum. Most of the ethanol produced in the United States comes from corn, a high starch crop. Corn kernels are milled or broken up exposing the starch. Yeast fermentation and distillation of the starch yields ethanol and carbon dioxide.

Corn as a feedstock for ethanol production creates both opportunities and problems for agriculture. Crop producers are reaping the benefits of higher prices while livestock producers and users of corn are paying more. Milk, poultry and meat prices continue to rise. The use of corn as a feedstock for ethanol, rather than a feedstock for human food is a contentious debate. Energy efficiency of ethanol and the vehicle fuel economy is another area of concern. Environmental quality and sustainability is also important.

Agriculture in Michigan is the second largest industry, contributing more than $71 billion to the states economy. Automobile manufacturing, our states largest industry is struggling to sustain itself. Bioenergy production and agriculture is being looked at by the Governor as a shining new star that is charged with putting the Michigan economy back on track. This creates a great opportunity for agriculture. However, along with it comes a great deal of responsibility. The decisions that are made and steps taken to move this issue forward need to be made with careful deliberation.