Irrigation is critical to successful chestnut production in Michigan, particularly when trees are young.  Growers should have irrigation installed before planting. There are a number of options for irrigating chestnuts, trickle is the most common in Michigan. Small trees with limited root area will require supplemental watering, but growers should be careful to not overwater.  The soil should not remain saturated and watering should occur only when rainfall becomes infrequent.

To get started, watch this recording of a chestnut irrigation presentation by Lyndon Kelley, a Water Management and Irrigation Educator with MSU Extension.

Trickle irrigation is the frequent application of small quantities of water on or below the soil surface is called trickle irrigation. This type of irrigation system delivers water, and can distribute nutrients and other chemicals directly to the root zone of the plant. Applied quantities closely match evapotranspiration and nutrient demand. Water is distributed through emitters placed along the water delivery (lateral) pipe in the form of drops, tiny streams or miniature sprays. Trickle methods include drip, bubbler and spray irrigation. In some cases the drip line may be buried under the soil surface and called subsurface trickle irrigation Trickle irrigation systems operate at low pressure; therefore, they require less energy for water pumpage when compared to other high pressure irrigation systems. Also, because of their precise application, they conserve water and nutrients when managed well. Because of the potential water and energy savings, trickle systems have become popular, and the number of acres under trickle irrigation is increasing every year. 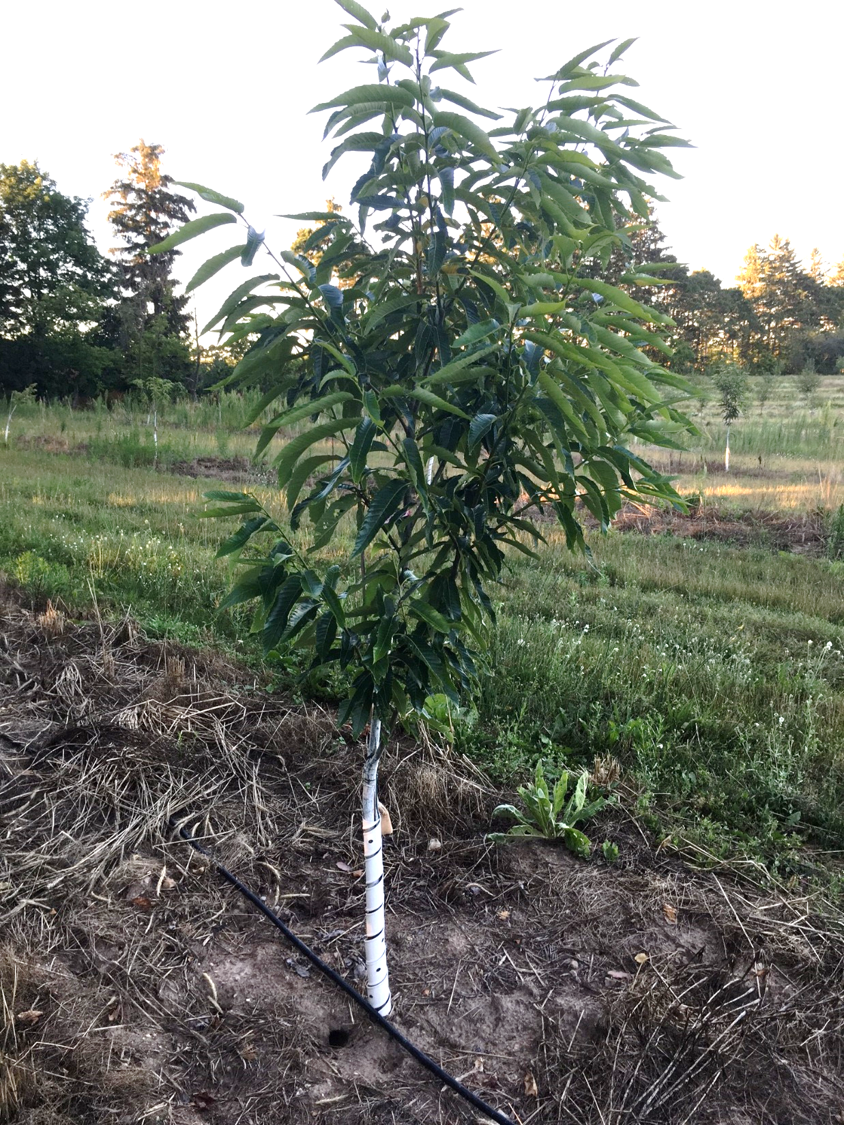 Drip irrigation provides excellent water management and conservation with a minimum of water. More and more growers are using drip irrigation on row crops. Drip irrigation applying small amounts of water slowly and frequently through emitters spaced along polyethylene tape or tubing is now the main method used to irrigate. The reasons for the growing popularity of drip irrigation are several. Drip irrigation offers improved yields, requires less water, decreases the cost of tillage, and reduces the amount of fertilizer and other chemicals to be applied to the crop. Because drip irrigation makes it possible to place water precisely where it is needed and to apply it with a high degree of uniformity, it lessens both surface runoff excess water running off the lower end of the field and deep percolation water flowing down through the soil past the root zone where cannot be used by the crop. Drip irrigation can also be used in conditions unsuitable for other irrigation methods on steep and undulating slopes, in very sandy soils, and in fields with widely varying soils.

These features make drip irrigation potentially much more efficient than other irrigation methods, which can translate to a significant water savings. But drip irrigation can only achieve this level of high efficiency if the system is carefully designed and managed so as to prevent such problems as emitter clogging and differences in emitter flow rates stemming from pressure variations in the irrigation system or from differences in emitters and flow passages originating in the manufacturing process.

The positive aspects of a drip system

Micro-irrigation is applying small amounts of water slowly and frequently through emitters spaced along polyethylene tapes or tubing makes it possible to apply water precisely where it is needed and to apply it with a high degree of uniformity, lessening both surface runoff excess water running off the lower end of the field and deep percolation - water flowing down through the soil past the root zone where it can no longer be used by the plant. Converting from conventional surface irrigation to a micro-irrigation system therefore can greatly improve how evenly water is applied over a field and how efficiently water is used. But this potential can only be realized if the micro-irrigation system is carefully designed, maintained, and managed.

Improper watering practices can cause more harm than not watering at all. Overwatering, a main cause of transplant failure, forces oxygen out of the soil and results in oxygen starvation of roots. This causes death of roots and leads to an eventual decline of the tree. The yellowing of foliage, developing first low and on the inside of the tree and progressing to the outer leaves, is an indication of oxygen starvation. Avoid frequent light waterings; this promotes shallow root systems susceptible to dessication in winter and heat stress in summer. Irrigation during the first year should be applied often at least every 1-2 weeks), but each irrigation should be at short duration .Thus, frequent irrigation will replenish the dry areas around the roots without waterlogging the soil. It is best to determine the timing of watering by the moisture level of the soil just above the root zone--the area containing most of the tree’s absorbing roots, generally 6 to 10 inches below the soil surface. Dig down 6 to 8 inches at the edge of the planting hole. If the soil at that depth feels powdery or crumbles when squeezed in your hand, the tree should be watered; soil that forms a ball and clings together when squeezed contains adequate moisture. A vigorous root system, important in establishing new transplants, can be favored by deep watering--watering to a depth of 12 to 18 inches below the soil surface. A commonly used method of deep watering is flooding the soil surface until water eventually soaks down to the desired depth. However, flooding is wasteful of water and temporarily drives oxygen out of the soil, smothering tree roots. Placing water at the proper depth initially is a more efficient way to deep water.