The cultivars listed below are some of the more commonly planted cultivars in Michigan orchards. Growers planting for commercial production should be utilizing the European X Japanese cultivars. Chinese and hybrid cultivars should not be planted together nor in adjacent orchards due to a pollen incompatibility that causes rot-like symptoms in the kernel of hybrid trees pollenized by Chinese trees.

General description: Colossal is a hybrid between Castanea sativa (European chestnut) and Castanea crenata (Japanese chestnut). It is similar to a series of cultivars called French hybrids since these are the types of hybrids grown in France and Spain, but it hails from the foothills of the High Sierra in California where it was bred more than a hundred years ago. Colossal was introduced to Michigan in 1992. It is the highest producing cultivar grown in the state.The tree itself is pollen sterile and must be planted in a row next to a pollen source.

The most beneficial characteristics of Colossal are its excellent production, its large nut, and its sweet taste after it has cured. It remains a standard to be met by other cultivars in terms of yield and nut size for growers in Michigan. The tree grows rapidly, but not that large. Young grafted trees go into production within three years after planting. Sometimes trace production occurs in the second year. The Colossal’ nut is similar enough to a “European-type nut” that it satisfies the European chestnut consumer.

Overall, a very vigorous tree, well adapted to Michigan weather conditions, and a heavy nut producer. It is the primary tree grown in California, Oregon and Washington. When pollenized by European/Japanese hybrid cultivars or Korean (Japanese) cultivars, the nuts are nearly perfect.

Negative attributes: The cultivar is chestnut blight susceptible. Another negative attribute is that the tree will appear to overproduce chestnuts and the chestnuts will become unusually small for Colossal. Heavy pruning of the trees is the suggested recommendation when this occurs, but it has not always solved the problem.

Additional comments: a European/Japanese cultivar was sold to pollinize Colossal. Its name is Nevada. This cultivar did not survive Michigan winters and Nevada should not be planted in Michigan. Nevada was a good pollinizer of Colossal. Nevada appears to grow well in other states including the Pacific Northwest. Nevada was not only winter sensitive, it produced a very poor quality chestnut in Michigan, usually several poorly formed chestnuts within a bur. When planting Colossal and other pollen sterile cultivars, make sure you consider the pollen parents needed in the orchard. It appears that other cultivars, including Chinese cultivars can pollinate ‘Colossal’ but you will get up to 30% decayed nuts when using Chinese chestnut as a pollen source. In southern Michigan, Colossal appears to be pollinated prior to July 4.

General description: Bouche de Betizac is a French hybrid between Castanea sativa (European chestnut) and Castanea crenata (Japanese chestnut). It is a pollen sterile, vigorous tree with upright growth. This cultivar produces large crops of big nuts that taste good and are easy to peel. Bouche De Betizac is well adapted for growth in Michigan and has survived winters and produced crops in the southern and northern Lower Peninsula. It is stated to be resistant to Phytophthora root rot, but since it rarely grows on its own roots, this is a moot point. The most beneficial characteristics of ‘Bouche de Betizac’ are its excellent yield and nut quality, it’s resistance to the Asian gall wasp, an invasive pest. It is also resistant to leaf anthracnose, though this disease has not been documented in Michigan.

Negative attributes: Like Colossal, there are years when the nuts of Bouche de Betizac are apparently overproduced and the nuts become small instead of the normal large.

General description: Precoce Migoule is a French hybrid between Castanea sativa (European chestnut) and Castanea crenata (Japanese chestnut). It is a vigorous tree with upright growth and has been shown to be well adapted to the Michigan climate. The most beneficial characteristics of Precoce Migoule are its copious, early pollen that is synchronized with Colossal and that its nuts mature at least two weeks earlier than Colossal making it a candidate for northern areas where early frosts damage nuts before they can be harvested. The nut has not been studied as much as its pollen. The nut is very acceptable and as a pollinizer for Colossal, Precoce Migoule has the best quality nut (Nevada and Okei are pollinizers of Colossal that have horrible nuts in Michigan).

Negative attributes: In some years, we have observed an over production of flowers, followed by heavy nut set resulting in a reduction of nut size. Nuts produced in these conditions can have low quality kernels. This needs further research. 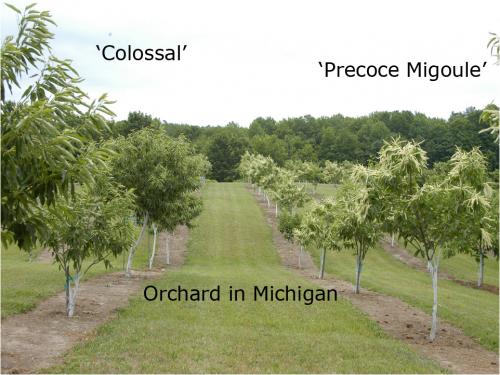 General description: Labor Day is a tree that was selected from the orchard of the late Norman Higgins in Perry, Michigan (position in orchard was row J and tree 160). The mother tree is about 50-years-old and it has multiple trunks with upright growth. It is reported to be Korean or have some Korean genetics (probably Japanese, C. crenata). It is a prolific pollen producer and sheds pollen early and for three weeks, which should help pollinate the early flowering European/Japanese cultivars like Colossal, Bouche de Betizac and Precoce Migoule. It is a good nut producer. The most beneficial characteristics of Labor Day are its copious, early pollen that is synchronized with Colossal and that it produces mature nuts in the second and third weeks of September. In southern Michigan, it will produce nuts the week of Labor Day (first Monday in September). It will not produce nuts that early in northern Michigan, but they will be much earlier than Colossal. Early harvesting is crucial in areas of northern Michigan where early frosts can damage nuts still attached to trees. For those growers who do not need early production, this tree is a good producer of high quality nuts and the nuts are easy to store for early markets. This tree has been propagated and planted in experimental plots and on farms in southern and northern portions of the lower peninsula of Michigan and has performed well.

Negative attributes: The yield is lower than the European/Japanese hybrid cultivars and it is slow growing. It acts more like a Chinese chestnut in terms of growth and production.

Additional comments: The cultivar can be told from other chestnuts in the orchard because the young bark is peppered with white lenticels, air exchange organs in the bark. Other chestnuts have these small white marks, but ‘Labor Day’ has very distinctive and recognizable lenticels. There are other Korean chestnut cultivars available for Michigan orchards, but so far, many have small nuts and may not be as consistent as Labor Day. 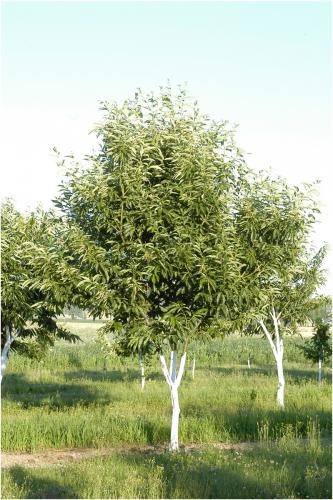 General description: Benton Harbor is a C. mollissima (Chinese chestnut) selection from seedling trees originally planted at the Michigan State University experiment station plot in Benton Harbor, Michigan. The mother tree remains the largest tree in the plot and initially was planted in 1992 (larger than Colossal that was planted the same year). This tree has produced relatively high yields (70-90 pounds) of high quality chestnuts each year. Because it has Chinese germplasm, it is chestnut blight resistant. Do not use as a pollinizer for Colossal or other European X Japanese hybrid trees. 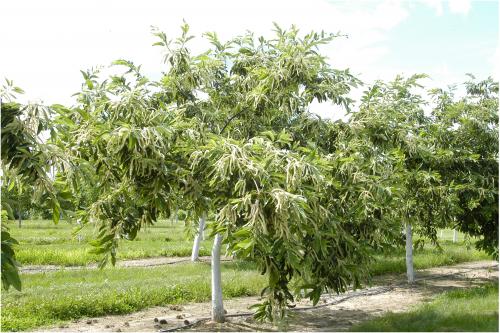 The most beneficial characteristics of Benton Harbor are the vigor, stable yield, and excellent tasting nuts in Michigan. The cultivar grows fast, gets into production relatively early (relative for Chinese) and stays in production. It also produces very large quantities of pollen starting in early July.

Negative attributes: Its vigor makes the tree extremely vulnerable to wind damage but grows back quickly.

General description: Everfresh is a C. mollissima (Chinese chestnut) selection from the Michigan State University experiment station plot at Benton Harbor. The tree is 15-years-old and it has produced chestnuts every year including the 2010 growing season when most Chinese chestnut cultivars were frosted. The most beneficial characteristic of Everfresh is that the nuts produced by this tree have a unique characteristic in that they have an extremely long shelf life. It is a slow growing tree and produces a lot of pollen. The flowers set in groups resulting in clumps of burs at the ends of the branches. Everfresh produces very well. Each year, this cultivar has produced a high quality nut with a long shelf life.

Negative attributes: Not a heavy producer of nuts. Can show external mold, but rarely shows any internal mold.

Additional comments: When stored properly we have been able to eat this nut the summer after it was produced.

General description: Peach is a C. mollissima (Chinese chestnut) selection from Empire Chestnut in Carrollton, Ohio. It was first planted in Michigan at the Michigan State University research station in Benton Harbor in 2000. Two trees were planted and one tree survives and is doing well. The single most beneficial characteristic of Peach is that, like Benton Harbor it can produce large yields of chestnuts, which is rare for Chinese chestnut in Michigan. Since it is a Chinese chestnut tree, it grows slow, produces a lot of pollen after the first week of July, which synchronizes well with the other Chinese cultivars. The cultivar gets it name from the "peach fuzz" found on the shell of the nut. Nuts stay attached to the bur and when it finally detaches, a yellow line forms around the edge of the hilum (spot). This often goes away upon storage.

Negative attributes: This tree appears to be vulnerable to very low temperatures. It does not kill the tree but it slows the growth and may be lowering the potential yield. New bud tips are damaged almost every year, but it manages to revitalize and yield well year after year. The shell of the nut has a tendency to split. Probably the least flavorful chestnut grown in Michigan.