The question of whether visitors should be charged a fee to taste wine leaves many wineries seeking to find the right balance between responsible business practices and customer hospitality.

Editor’s note: This information was first prepared and published as part of the Northern Grapes Project. 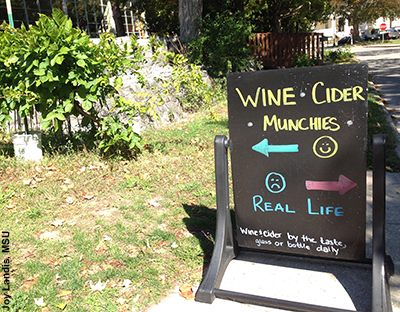 Charging visitors a fee to taste wines is a sometimes contentious issue that has many wineries seeking to find the right balance between responsible business practices and customer hospitality. Although 70 percent of North American wineries now charge a fee to taste wines, the practice in some regions is inconsistent. Some wineries believe offering a free tasting can encourage wine sales, and others feel as though charging a fee shows the consumer that the wine is of high quality and can’t be given away for free.

To obtain the information relating to wine purchase and consumption behavior, we surveyed visitors to Michigan wineries throughout the 2012 summer and fall. We worked with Michigan wineries to identify tasting room visitors willing to participate in the study, and then sent surveys to participants shortly after their visits either by mail or email.

The survey was developed following a series of interviews with Michigan wineries beginning in February 2012, which helped us accurately understand the research needs of wineries. Nearly 70 percent of the Michigan wineries with tasting rooms were contacted about what they would like to know about their customer base. These interviews also helped recruit potential research partners. In total, 1,552 questionnaires were gathered by U.S. mail and email with an overall response rate at about 40 percent. Although understanding the question of how a tasting fee might impact sales was not a primary objective of the Northern Grapes Project, some of the questions we asked allowed us to tease out some useful information on the topic.

This article is the fourth in a series of reports that cover questions of a particular interest as they pertains to tasting room operators.

Next we analyzed the data to see there was a difference in the amount spent on wine in the tasting rooms that charge a sampling fee compared with those that don’t.

Because this research question was not a primary objective of the Northern Grapes Project, we did not ask subjects to report their spending at each winery, but instead asked about the total amount of wine purchased from wineries throughout their trip. However, because many respondents had only visited one tasting room on their trip, we were able to analyze the data from these visitors to better understand the actual purchase behavior of visitors to tasting rooms that charged a fee versus those that did not charge a fee (Table 1).

The purpose of the travel (Table 2) also seemed to have an impact on total spending at the winery. Those who were traveling for a getaway spent the most at $60.96 in total, while those who were traveling only to visit wineries spent a total of only $45.88 (many of these were day visitors). Additionally, when it comes to the purpose of the visit (Table 3), the highest amount spent at the wineries was by those looking to learn about wine ($73.74) and those looking to purchase wine ($69.99).

To help determine which factors contributed the most to differences in spending, we used a statistical procedure called multiple regression analysis. In addition to whether or not a sampling fee was charged, we also considered purpose of travel, reason for visiting the winery, the gender of the respondents, the age of the respondents, the amount of time spent planning the trip, the region of the trip and the respondents’ respective knowledge of wine. Overall, the model showed these variables were not great predictors of total spending. In fact, all of these factors together, including whether a sampling fee was charged, only accounted for 10 percent of the difference in spending at the wineries and whether the tasting room charged a fee was not even a significant factor. The other 90 percent of the spending difference is likely the result of variables not measured in this study, like wine quality.

Although there was a large difference in the amount of wine purchased among those who visited tasting rooms that charged a sampling fee compared with those that did not charge a fee, that fact seems to be insignificant in explaining the difference in wine purchases. This is one of many cases where correlation does not equal causation. A famous example of this point refers to research from several years ago that showed the murder rate in the United States was correlated with higher ice cream prices. Obviously in this case, some other variable was responsible for both the ice cream prices and increased murder rate. The same appears to be true of the correlation between tasting room fees and total wine purchases. Although there is a relationship between the two, whether a winery charges or doesn’t charge for a tasting doesn’t seem to impact sales either positively or negatively.