The effects of the 2012 weather will impact apple maggot levels for the 2013 season.

The spring frosts determined whether or not fruit was going to be produced in a given apple orchard last year (2012), but how the orchard was managed will determine the likelihood of having an issue with some of our annual pests, particularly the apple maggot.

The adult stage of the apple maggot is a small, picture-winged fly that if left unchecked will produce progeny that readily infest a crop of apples. The immature stage, or maggot, tunnels throughout the flesh of the apple, making it unsuitable for consumption. The maggot exits the apple when it is finished feeding. Apple maggots spend the winter in the soil or duff on the orchard floor as brown-colored pupae, the final growth stage before emerging as adults. 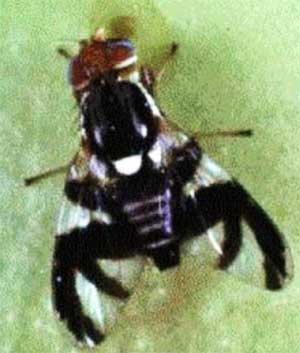 Fly emergence is temperature and moisture dependent, usually occurring when about 900 degree days base 50 degrees Fahrenheit (DD50) have accumulated (late June or early July) and the soil has been moistened by rain. Peak fly emergence occurs between 1,400 to 1700 DD50, generally in late July through mid-August. A mated female fly will puncture the skin of the apple, deposit an egg, and generally move on to other apples, depositing a single egg in each fruit. An individual female may deposit upwards of 300 eggs.

Captures of apple maggot flies in Michigan orchards have increased over the last five years, and 2012 was no exception. Despite the dry summer, apple maggots emerged in force this past year. For example, catches in four southwest Michigan orchards where we conducted research in 2012 averaged over 200 flies per trap (Figure1). This is greater than a five-fold increase in the average catch in southwest orchards of 36 per trap we recorded in 2011.

Figure 1. Average seasonal apple maggot (AM) captures in four southwest Michigan orchards that had insecticides applied through third cover only, 2012. 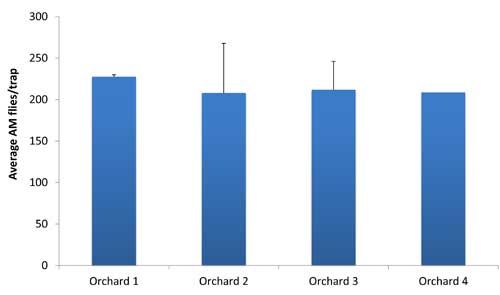 Apples were often left unsprayed in 2012, especially in the southern part of the state where crop load was severely reduced. Left unchecked, emerging flies roamed the orchards for several weeks. Furthermore, fruit were left hanging on the trees throughout the fall, attracting the attention of female flies. In sampling orchards in the southwest and Fruit Ridge area, researchers at Michigan State University Extension noticed that many of the unprotected apples were infested with apple maggot larvae, often with multiple entries per fruit. The ripening apples no doubt served as ideal food and housing until each maggot dropped from the apple to the ground to pupate, where it lies in waiting for the proper temperature and moisture cues in 2013, signaling that it is time to emerge. Thus, we anticipate high apple maggot activity in the coming season, especially in orchards where summer insecticides were not applied.

Flies typically have to re-infest orchards from adjacent woodlots and areas with hosts such as hawthorn or feral apples. In addition to immigration from outside habitats, growers in 2013 should expect resident orchard populations where unprotected fruit remained on the tree in 2012. Border applications of insecticides will not be an effective management option in these cases. In fact, it could be two years before the resident orchard population is lowered, as a portion of the apple maggot pupae stay in the soil for a second year.

Predicted high apple maggot pressure this coming summer increases the need to monitor for this pest and protect the fruit at the proper time. Adult activity can be monitored using yellow sticky panels with ammonium bait or a red sphere trap covered with an adhesive and baited with synthetic fruit volatile. The yellow trap is most useful during the pre-oviposition period when newly emerged females are actively feeding. The red sphere trap mimics the ripening fruit that flies are attracted to during egglaying, and is effective throughout the season.

Comparisons of the two trap types in Michigan have revealed that the red sphere baited with fruit volatiles is the most effective in catching the mature female apple maggots that are seeking egglaying sites in commercial orchards, consistently catching three to four times more flies. Optimally, traps should be checked twice weekly starting just before 900 GDD base 50 F until the first fly is captured, then once a week thereafter to indicate the end of the flight.

In determining control treatment timing, on-farm fly catches should be used in conjunction with regional trapping information. If you employ a good trapping program, a control treatment for apple maggots is not warranted until flies are captured on your farm. If flies are trapped on-farm and a regional catch was recorded prior to the on-farm fruit fly capture, the treatment should be timed based on the earlier regional capture. This conservative approach is the best way to ensure that the control is applied prior to egglaying. Once the first fly has been captured, there is a seven to 10 day period before eggs are laid. During this time, females are searching for nutritional sources needed to become sexually mature. Chemical control of apple maggots is focused almost entirely on the adult, with the goal of preventing egglaying.

Apple maggot control traditionally has been achieved with organophosphate insecticides like Guthion and Imidan. A summer Guthion spray for apple maggot control would be a good option in 2013 for growers fortunate enough to have remaining stocks of this phased-out material. Synthetic pyrethroid compounds like Asana, Warrior, Danitol, Battalion, Mustang Max and Baythroid XL are also toxic to adult fruit flies, but are generally viewed to be only moderately effective because they have a shorter field residual. The first treatment with all of these contact poisons should be timed for the start of egglaying a week to 10 days after the first flies are captured.

There are several new reduced-risk and OP-replacement insecticide products available for apple maggot control. The neonicotinoids Calypso, Belay, Provado and Assail are labeled for apple maggot control. The Spinosyn compounds Delegate and Entrust, and the diamide Altacor, are active on apple maggots, but are labeled for suppression only. Unlike the older contact poisons, these new chemistries are primarily active on apple maggot flies when ingested. Thus, treatments should be applied closer to the first fly catch in traps. This will ensure that female flies consume a lethal dose before they begin depositing eggs. The neonicotinoid insecticides provide additional “curative” activity on apple maggots, based on their plant-penetrative attributes that can kill eggs and larvae post-infestation.