The 2012 weather significantly affected the fruit, but also had an impact on insect levels. Let’s explore how codling moth levels and management may be impacted for the 2013 fruit season.

Mention the summer of 2012 to a Michigan fruit grower and talk turns somber in a hurry. The frost injury and drought that occurred will be talked about for many generations. Hopefully, we will never see another loss of crop like that in our lifetime.

From a strictly entomological point of view, it was an unusual season, also. It has not occurred in the memorable past that so few, if any, insecticides were applied in a single season. Many growers started the season with their insect management program in place but walked away from it early after the frost took its heavy toll.

The effects of this unusual occurrence will be felt in the upcoming season and perhaps in seasons beyond. Pest insects and beneficial insects alike have been impacted. What are the implications for some of our primary insect and mite pests and beneficials; what can we expect in 2013? These are the questions that will be addressed in a series of articles that look to the upcoming growing season from an entomological perspective.

The dark clouds of 2012 have passed and there’s no telling what looms on the horizon with respect to weather. Despite the unpredictability, it’s time to shift our gaze from last season’s problems and look toward the new season with the knowledge that, at least entomologically speaking, there is good reason to be encouraged.

Our review starts with a look at the key pest of Michigan apples: codling moth. This past season we conducted research in many orchards around the state. Trapping and fruit inspections revealed that codling moth activity varied across the state’s apple producing regions. In the southwest and southeast, codling moth had an early but robust first generation flight as illustrated by catch in pheromone traps at the Trevor Nichols Research Center (Fig. 1). Weekly catches of moths in traps were fairly high with a distinct peak period of activity. Unlike in a typical year, however, there was essentially no second generation flight. This was not surprising, as the spring frosts had removed nearly all of the fruit – the food source for first generation codling moth larvae. 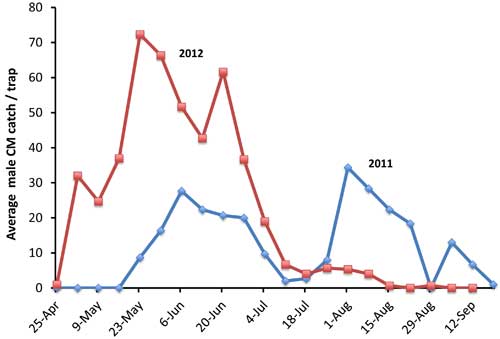 Codling moth also had an early and fairly robust first generation flight in the Fruit Ridge area and in west central Michigan (Fig. 2). Unlike the southern portion of the state, however, codling moth was able to mount a second generation flight as well. Although fruit loads ranging from only 10 to 40 percent of a crop were devastating to growers, for codling moth they were a plentiful food source. Some growers maintained a summer codling moth management program and protected their fruit from injury. Others, however, did not apply insecticides in the summer and, in many cases, wormy fruit were not hard to find. 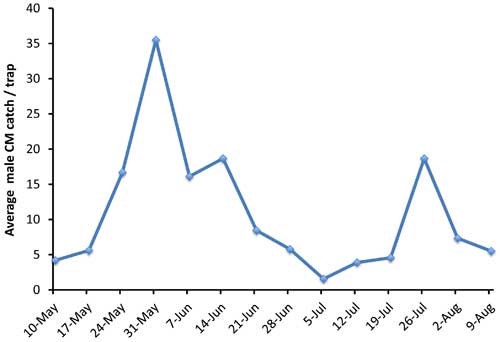 As always, growers benefit greatly by monitoring for codling moth using pheromone-baited traps. A late start to the flight would mean that spray timings could be delayed. For example, the first larvicide (e.g., Altacor, Belt, Delegate) may not be warranted until 350 or even 400 degree-days post-biofix. This could mean that only a single treatment may be required to achieve first generation codling moth control. Low codling moth pressure would also provide an ideal opportunity for apple growers to use mating disruption.

Applying hand-applied MD dispensers at a high rate of 300 to 400 per acre may be all that is needed for codling moth control. And for those who want to save money, low codling moth pressure provides an opportunity to use a lower rate of 200 dispensers per acre and apply supplemental insecticides if trapping indicates they are needed. The options above also are likely valid for apple growers in other regions that maintained a summer codling moth management program in 2012.

Growers also should consider implementing a pheromone-based management program, as insecticides alone may not provide enough control under high codling moth pressure. Applying hand-applied MD dispensers at a high rate of 300 to 400 per acre and applying supplemental insecticides as needed based on moth captures in traps should provide the high level of control that may be required to curtail second generation activity and fruit injury at harvest.

We hope this article helps in planning for the 2013 season. Future articles will review 2012 activity and 2013 management implications for leafrollers, apple maggot, mites and other secondary pests and beneficials.