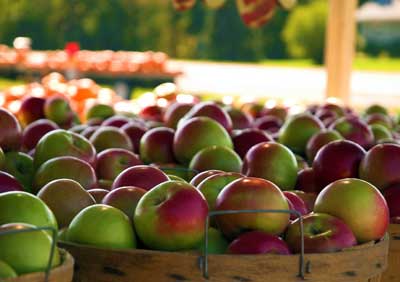 In a normal apple year, Michigan State University would be launching into weekly apple maturity reports from late August until mid-October. As everyone in the apple business knows, early season warm temperatures followed by April frosts drastically reduced the Michigan apple potential for 2012 (estimated 2.9 million bushels statewide compared to approximately 25 million for 2011). Accordingly, the MSU apple team reports this fall will present less detail on current apple maturity status and will link to pertinent articles on apple varieties, harvesting, storage and post-harvest disorders.

See the MSU apple website at apples.msu.edu and the MSU Extension News for Fruit website for more information, including reports from other regions, past season reports and much more information about apple maturity and apples in general.

Each year, MSU Extension publishes predicted apple harvest dates. This year’s can be read in the article Predicted 2012 apple harvest dates and takes into consideration the very strange weather we’ve had – early start to spring, several frosts and freezes, a greatly reduced fruit set and a summer drought. All these events have given us the least confidence in our predicted harvest dates than ever before. However, looking at early apple varieties that are being harvested around the state, it does seem that the adjusted harvest dates are close to what is happening in orchards around the Grand Rapids, Mich., area for which these dates are calculated. So, in the end, the early bloom and hot summer temperatures have pushed apple maturity very early, as much as three or four weeks earlier than usual.