Michigan growers are busy bringing in the harvest from more than 45,500 acres. 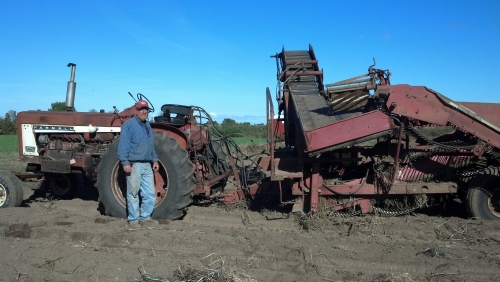 Although a few weather events have interrupted fieldwork recently, Michigan growers are expected to harvest more than 45,500 acres of potatoes in 2012. Harvest began in July for downstate producers of processing varieties, but Northern Michigan fresh market growers have only been digging since the annual Posen Potato Festival wrapped-up in mid-September. Yields have been good, and if conditions remain favorable, the harvest should near completion statewide by the end of October.

Historically, potato harvest was a labor-intensive community activity. Fields were harvested by hand or with simple machinery and children would be released from school to participate. Armed with a fork, a capable worker could dig half an acre each day. The tubers were then packed into bags or wooden crates, accumulating at the modest rate of 40 to 60 bushels per person per day. Today modern harvesting equipment allows 4 to 5 workers to harvest and load more than thirty acres of potatoes in eight hours. Shoots, tubers, soil and rocks are lifted together as the harvester crawls through the field at an average speed of 2.5 miles per hour. Large operations often run multiple harvesting crews simultaneously.

Approximately 75 percent will be processed into chips; 18 percent will enter the fresh market; 6 percent will be sold as certified seed and 1 percent will go to alternative uses such as livestock feed. Some of the harvest is shipped directly from the field for packing or processing, but the majority goes into cold storage for marketing throughout the coming winter and spring.

The Michigan potato industry represents a significant contribution to the state’s economy. The farm gate value of last year’s harvest was over $174.5 million. The crop’s impact is also felt elsewhere along the value chain among suppliers, marketers, shipping contractors, packers and processors. The community can still participate in the harvest and support this important industry by purchasing Michigan grown potatoes and potato products.