In their first year, the St. Clair County 4-H Robotics club has seen great success and is setting records within the Michigan 4-H program.

In its very first year, the St. Clair County 4-H robotics program has achieved much success: each of its three teams have won awards, with the high school team qualifying for the FIRST Robotics World Championships. 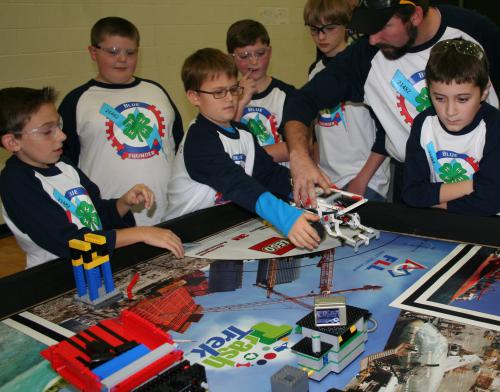 The idea to form a 4-H robotics club in St. Clair County started with Michael. As a junior in high school, he was interested in starting a younger robotics team that would feed into his Marysville High School program. When Michael had difficulties starting a robotics program through the school, he met with St. Clair County 4-H leader, Dawn Nowicki to brainstorm a solution.  A seasoned 4-H volunteer, Dawn was interested in starting a 4-H robotics program in St. Clair as well, as she had seen children in her primary 4-H club express interest in more science-based projects. Robotics seemed to be a great route for keeping them involved, so Dawn and Michael decided to create a program for robotics teams that would operate under a 4-H club umbrella.

“We are so glad St. Clair County 4-H has brought this new adventure in technology to these kids who would not otherwise have this opportunity,” said Trevor Korn, a 4-H Robotics Club volunteer whose ten-year-old son participates in the program. “4-H teaches good life skills for its youth members. There are many new areas of science and STEM (science, technology, engineering and math) that have become a large part of the 4-H program today, unlike the traditional 4-H that I grew up with.” 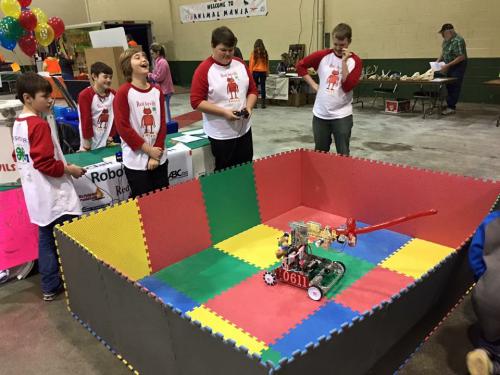 Joining Dawn and Michael to coach the teams were Michael’s mother Denise Dupuie and Don and Pamela Walker. The Walker’s oldest son, Sam, was very interested in robotics but did not have the opportunity to participate in a high school team as a home-schooled student. As a result, the Walkers previously drove Sam 160 miles every day to the neighboring county’s vocational tech center to participate in a community robotics team. The launch of a 4-H robotics club in St. Clair County provided the Walkers with both a closer venue for participating in the program and an opportunity to engage Sam in two great programs: 4-H and FIRST Robotics. This unique combination compelled the Walkers to volunteer their time to the club, a decision Pamela was glad she made as watched her son find his fit in high school as a result. 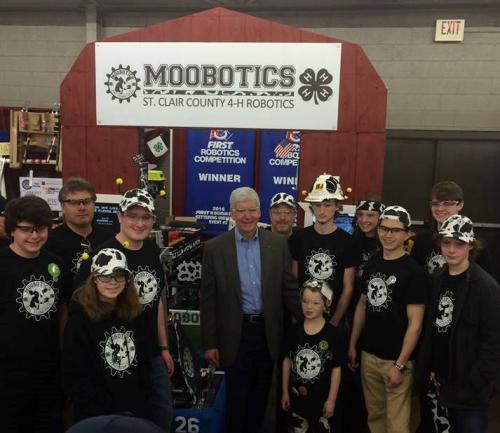 “The most rewarding part is watching the kids grow,” Pamela said. “These youth are very intelligent and driven, but they don’t have many outlets to use their brains in such an exciting environment.  All of the benefits of a sports team – teamwork, competition, responsibility, excitement and fun – are entwined in the robotics team, plus the opportunity to develop leadership and business skills. These youth are developing skills that will serve them their whole lives.” 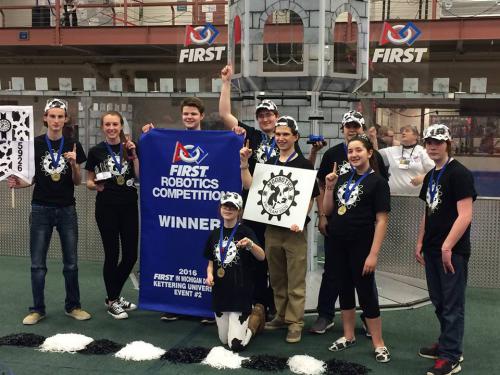 The FRC team, which branded themselves “Moobotics,” saw the most success. At their first competition, Kettering District 2, they placed first out of 41 teams and took home the Rookie All Star Award.  At the Marysville district event, they placed first out of 40 different teams and took home the Judge’s Award. During the Michigan State Championship, they received the Rookie Inspiration Award and advanced to the World Championship where they competed successfully for their first year.

Natalie Modrich, one member of the six-person Moobotics team, has been active in the St. Clair 4-H program for some time through poultry, beef, swine, rabbits and photography project areas. As a member of the 4-H Robotics Club, Natalie feels she can put her knowledge and STEM interest to use. 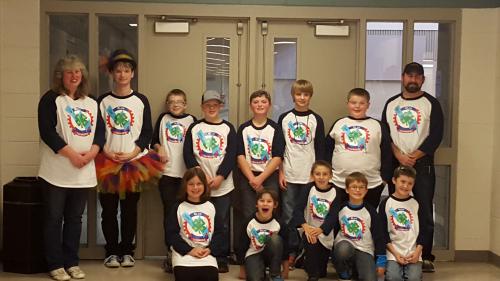 “I wanted to participate in robotics because I thought it would be a good opportunity to express my true self in a place where you can use your knowledge to better the team, while learning from others,” Natalie said.

“Robotics is a lot of fun,” said Troy Korn, a ten year-old St. Clair Co. 4-H member that participates on the 4-H Robotics Club FLL team. “It’s also a large commitment. During build season we spend a lot of hours working hard to get ready for competition, but it is all worth it. Competition is awesome and I loved building with my friends, along with making new ones.”

Members of the St. Clair Co. 4-H Robotics Club also received individual recognition in their first year. Michael Dupuie was voted the Youth Mentor of the Year for his role in mentoring five robotics teams in the county, including two in the 4-H club. Sam Walker received recognition as one of the top eight FIRST robotics competitors in Michigan. The award is based on a student’s involvement in FIRST, their dedication to grow the program and their cumulative GPA.

“My favorite part about participating in robotics has been growing close with the other Moobotics team members,” Sam said. “To quote another one of my team mmembers, 'we have become a robot family.'”

For current 4-H members or leaders interested in starting a robotics club, the members of the St. Clair County 4-H Robotics Club are happy to share their advice. Feel free to contact St. Clair County 4-H Program Coordinator Lori Warchuck. For more information about Michigan 4-H and how you can get involved, visit 4h.msue.msu.edu