The world has little use – and precious little time -- for detached experts.

A group of scientists – each of them experts – makes a compelling case in this week’s Science Magazine that the growing global challenges has rendered sharply segregated expertise obsolete.

Disciplinary approaches to crises like air pollution, biodiversity loss, climate change, food insecurity, and energy and water shortages, are not only ineffective, but also making many of these crises worse because of counterproductive interactions and unintended consequences, said Jianguo “Jack” Liu, lead author of the paper “Systems Integration for Global Sustainability.” He also is Rachel Carson Chair in Sustainability and director of the Center for Systems Integration and Sustainability (CSIS) at Michigan State University (MSU).

“The real world is integrated,” Liu said. “Artificially breaking down the real world into separate pieces has caused many global problems. Solving these problems requires systems integration – holistic approaches to integrate various pieces of the real world at different organizational levels, across space and over time.”

The paper’s authors, themselves with experience spanning agriculture, biodiversity, climate change, ecology, economics, energy, environment, food security, trade, water, and more, in essence paint a new paradigm of research that crosses boundaries among natural and social science disciplines, as well as other disciplines such as engineering and medical sciences.

Using examples that are both far-flung and tightly intertwined, these scientists show how systems integration 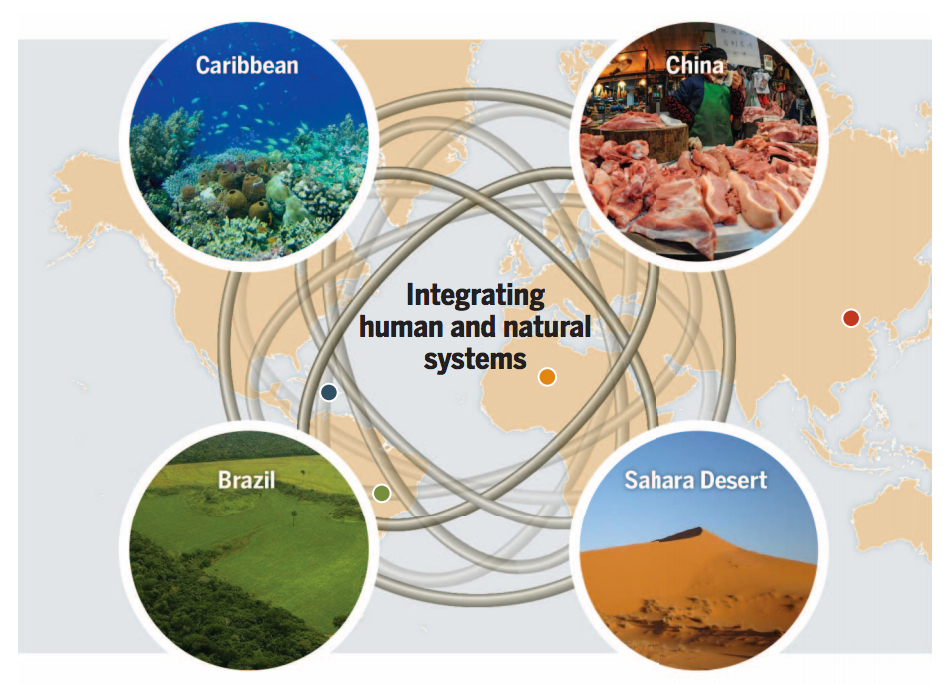 can tackle the complex world, from unexpected impacts of biofuels to hidden roles of virtual resources such as virtual water.

The paper’s first illustration wraps Brazil, China, the Caribbean and Saharan Africa into an example of how the world demands to be approached not just for its singular qualities, but for its lack of boundaries over time, distance or the organizational levels mankind imposes.

The rapidly growing food export to China from Brazil destroys tropical forests and changes food markets in other parts of the world, including the Caribbean and Africa. Agricultural practices in the Sahara Desert in Africa stir up dust which enters the atmosphere and floats as far as the Caribbean. That African dust has been shown to contribute to coral reef decline and increased asthma rates in the Caribbean. It also affects China and Brazil that have made heavy investment in Caribbean tourism, infrastructure, and transportation. All these interactions, and the many more that exist in one example, defy borders both on maps and in academic disciplines.

Yet conventional research and decision-making often have taken place within separate disciplines or sectors. The paper notes that one of the systems integration frameworks -- human-nature nexuses -- “help anticipate otherwise unforeseen consequences, evaluate tradeoffs, produce co-benefits and allow the different and often competing interests to seek a common ground.” For example, the energy-food nexus considers both the effects of energy on food production, processing, transporting, and consumption, and the effects of food production, like corn, on the generation of energy, such as ethanol.

Telecoupling - a way to make sense of a complex world

Many studies on sustainability have focused on one place, but the world is increasingly “telecoupled” – a term which embraces socioeconomic and environmental interactions over distances, sometimes several thousand miles away. For example, the large amount of coal from Australia sold to far-away markets like Japan, the European Union and Brazil affects not only those markets, but has global impacts far beyond. The money and environmental impacts such as CO2 emissions that flow with the coal, along with the mechanisms of transporting and burning the fossil fuel, spill over to countries between the partners.

Acknowledging that everything must be integrated is critical for scientific advances and effective policies, the authors say. So is the engagement between researchers and stakeholders. For example, Liu has partnered with environmental and social scientists to show how policies in China to curb human’s role in deforestation and panda habitat degradation were strengthened by enlisting nature reserve residents to receive subsidies to monitor the forests. The innovations were spurred by careful observation of the push-and-pull dynamics of managing a system to allow both people and the environment to thrive.

The paper says that effective policies and management for global sustainability needs the human and the natural systems to be more integrated across multiple spatial and temporal scales. Through developing and using powerful new tools, such as big data tools, the authors think it is essential to quantify human-nature feedbacks and spillover systems. Science has largely ignored these, but they can have profound impacts on sustainability and human well-being.

It is time to integrate all disciplines for fundamental discoveries and synergetic solutions because of increasingly connected world challenges, Liu said.

“Furthermore, the world no longer has the luxury of the past, when there were fewer people on the planet and resources were more abundant,” Liu said. This will require funding agencies and universities to make more drastic changes to alter the reward mechanisms and transform the scientific community from isolated experts to integrated scholars.”

The work was supported by the National Science Foundation’s programs on Dynamics of Coupled Natural and Human Systems, and MacroSystems Biology; and Michigan AgBioResearch.

SCIENTIFIC REPORTS -- Climate variability and trends at a national scale