While Duke Elsner (MSU Extension) was touring some of the defoliated forest blocks in and around Sleeping Bear Dunes, he found some places with lots of dead caterpillars still hanging on the twigs (Photo 1). Duke recognized the brown, fuzzy caterpillars as being victims of a fungal pathogen, and brought them to the MSU campus with him today (Thursday, May 27). A phone call to Richard Humber at Cornell revealed that the fungal disease is most likely caused by Furia crustosa, an Entomphthorales fungal pathogen that only attacks forest tent caterpillar and closely related species. The dead caterpillars in the picture are no longer caterpillars, they are mushrooms. The caterpillars were completely consumed by an internal fungal infection, and then under moist conditions some of these caterpillar-mushrooms sporulated, sending a few hundred thousand spores (conidia) raining down where they could infect other forest tent caterpillars. When a significant proportion of the caterpillars become infected and dies, it is called an epizootic (like an epidemic). The epizootic will cause or contribute to the collapse of the forest tent caterpillar outbreak in some places.

Duke has also seen lots of another parasite that can cause or contribute to the collapse of forest tent caterpillar outbreaks: the friendly fly, Sarcophaga aldrichi. The friendly fly gets its name because it likes to land on people, apparently hoping you are a giant caterpillar (Photo 2). These flies are completely harmless, but may be annoying. The flies are only interested in finding caterpillars to deposit their eggs on. The fly egg will hatch within a week, and the fly larva or maggot will tunnel into the body of the caterpillar. The fly population grows faster than forest tent caterpillar, often bringing outbreaks to a halt after two or three years.

The forest tent caterpillar outbreak will collapse after two or three years in any one location, but the geographical spread of the outbreak to surrounding areas may prolong the time period of the regional outbreak. After most of the forest tent caterpillars are gone, the friendly fungus and the friendly fly will have little to feed on, and they too will nearly disappear. Some five to 15 years from now the whole thing will happen again. 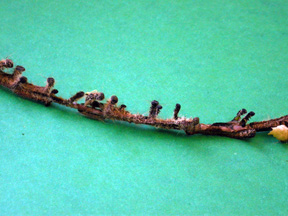 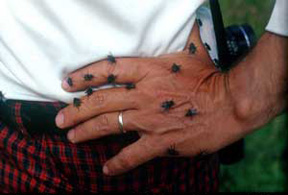