Using ground-based fans to increase the movement of cold air past obstructions and constrictions in natural drainage paths can decrease the likelihood of freeze injury during spring freezes.

Reducing injury in spring freezes is a major concern of most fruit farmers, but often little is done because of cost. There are numerous sites where a degree or two could be gained by removing obstructions from air drainage passages under radiation freeze conditions. Since cold air is heavier than warm air, it tends to seek the lowest point and flows like water across the farm. Obstructions such as road fills, natural earth dams and dense undergrowth of brush or trees in fencerows slow cold air movement.

By removing obstructions, growers can move cold air more quickly off of the farm and can often reduce frost damage. The use of ground-based fans to improve air movement and thus frost control is not new technology and most tests indicate little benefit, especially with the older small units tested and in locations where large areas were involved.

Years ago, Mike Thomas worked with a grower in Hartford, Mich., and Phil Brown of Conklin, the manufacturer of a large PTO-driven tractor-mounted fan, in a test of its ability to affect temperature in a very specific situation on the farm. There is about a 25-acre portion of the farm that drained through a swale that had a very narrow opening between two hills and a small, 4-foot high natural earth dam at the mouth of the opening. Another orchard was planted below this opening to the edge of the farm where cold air continued off to lower elevations in a large, cold air storage area. The grower had noticed that the orchard below the drainage opening had a better crop on it than the orchards uphill of the opening. It was very obvious from the frost line in the orchards that it was colder at several elevations uphill of this obstruction. 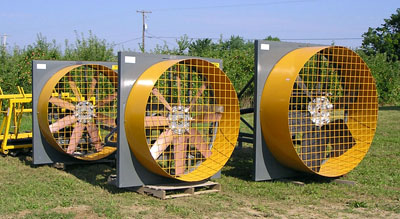 Examples of tractor-powered fans to move cold air away in an orchard.

The grower widened the opening from about 30 feet to about 100 feet to breach the natural dam in the opening. He cleared brush from the property line below the opening. The situation was ideal for air moving fans because of the unique topographical features. Brown agreed to provide two 100,000-CFM fans for a trial.

A test was run on a frosty fall morning. Two fans were used, one just beyond the opening and another about 500 feet uphill in the drainage way. The drainage way formed a double curve and the uphill fan was placed to move air around the first curve. The effect of the individual fans was quite different because of the topography. The uphill fan pulled from a wider, flatter area and pushed air into a narrower area. It did not affect temperature near it as greatly as the lower fan at the opening. This fan pulled from a narrow area and pushed into wider, flatter area. It would take a lot of these fans to have a positive effect on a broad slope, but in this specific location the two fans created an increase in air flow which affected temperatures positively over 15 to 20 acres under moderate radiation freeze conditions.

Growers wishing to invest in frost control with ground fans need to look for specific sites on the farm where the fans can be used to speed airflow through natural drainage passages. The more restricted the passage, the greater effect the fan will have. Testing on a frosty morning is the only way to be sure it will work for you.

Livestock may not mix with fruit and vegetable production