Alfalfa weevil and potato leafhoppers in alfalfa will cause problems

Summer temperatures and weather patterns bring out these insects that can reduce yield, quality and persistence of stands in alfalfa.

As producers finish cutting first cutting and have a chance to assess their fields for the next cutting, they should pay close attention to insect pressure that may spill into their hay fields. Two of the most damaging insects are alfalfa weevils and potato leafhoppers (PLH). Several reports of severe cases of weevil damage have been reported in Michigan this spring in second cutting alfalfa. At this time, MSU is not recommending an insecticide application for weevil damage. While the damage caused by the alfalfa weevil is ending, the damage and effect of potato leafhoppers are just starting to heat up with summer weather. The end results of pests in alfalfa are reduced yield, reduced quality and reduced persistence of stands.

Alfalfa weevil (Photo 1) damage is generally limited to the southern two-thirds of lower Michigan. There has been several areas of occurrence in the Upper Peninsula and damage is usually spotty in northern lower Michigan. Symptoms include holes in plant tips and in severe cases, grayish, skeletonized leaves (Photo 2). 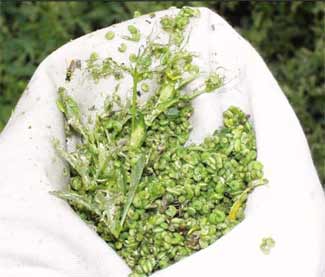 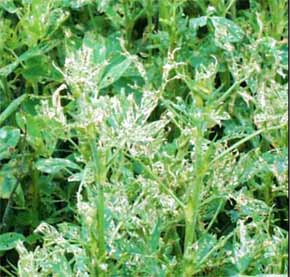 The life cycle of alfalfa weevil favors damage in first cuttings and emerges in early spring. Smaller larvae will feed on leaf tips and larger larvae eat the entire leaf. Biological control of alfalfa weevil has been highly effective with several species of parasitoid wasps (Photo 3). Timely cutting of alfalfa will kill most larvae, pupae and some adults. 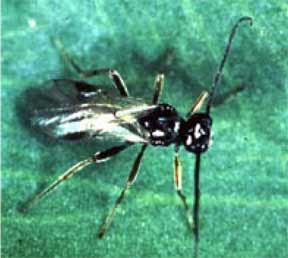 Potato leafhoppers are native to North America. They are small, bright green, torpedo-shaped sucking insects (Photo 4). Both adults and nymphs remove plant sap and inject toxic saliva as they feed. Typical symptoms include a bronzing or hopperburn (Photo 5) on plants. The bronzing of alfalfa plants has been mistaken for summer drought or a nutrient deficiency. However, when scouting fields, a V-shaped yellowing is seen on the edges of leaves. These insects do not overwinter in Michigan, but are carried up by spring storms from the Gulf Coast of the United States. There can be several overlapping generations per summer. 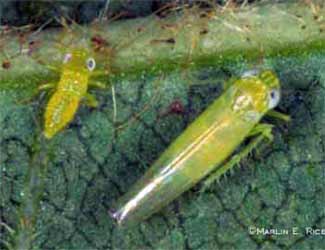 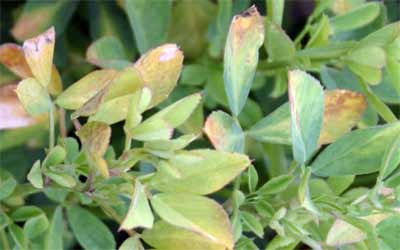 The question producers should ask is how do I manage potato leafhopper infestations? There are three ways the question can be addressed.

Chemical. The timely application of a foliar insecticide will be effective in controlling potato leafhoppers.

Producers should be cautious when using insecticides in areas where bees are present.

Varietal selection. The use of glandular-haired resistant varieties can significantly reduce the losses due to insect feedings. However, producers need to be aware that under heavy infestations, a chemical application of an insecticide may be warranted.

Cultural. Timely early cutting will kill eggs and many nymphs and should be considered instead of an insecticide application.

Producers should always consider the cost of treatment verses the loss of quality, yield and stand longevity. New alfalfa stands should be considered a higher risk when evaluating the economic consequences of insect pest management.

Be Food Safe and Ready for Emergencies

Maintaining Your Health During Challenging Times Lunch and Learn 4.28.21