Alfalfa weevils are making a comeback this spring

As in the previous article, I feel like I am repeating myself. Alfalfa weevil is making a comeback as an alfalfa defoliator. An introduced non-native pest, alfalfa weevil was found in the eastern United States in the 1950s. Although insecticides were first used to manage the weevil, a successful biological control program found and introduced several parasitic wasp species that kept the weevil population below damaging levels for many years. In the last decade, however, weevil numbers and reports of defoliation are on the rise in many states in the Midwest. It is not clear why populations have increased, but insecticide applications are more common. As insecticide use increases, the impact of biological control is likely further disrupted, continuing to exacerbate the problem. It is thus critical to manage alfalfa weevil with cultural methods (such a cutting) first, and to only apply insecticides when weevil defoliation is over threshold.

The easiest scouting method uses “tip injury.” Survey across the field not just on one side or on a field edge. Check tips of 100 stems for feeding. Treat if 40 percent of stems show damage, larvae are still present, and the field won’t be cut for at least seven days.

Another scouting method is the “stem and bucket” action threshold which uses both weevil number and crop height. Collect 30 stems at random (snap off at base) into a bucket from a field. Shake the stems into the bucket to knock off big larvae. Don’t worry about the little larvae. Count the total number of larvae in the bucket. Then randomly select 10 of the 30 stems and measure the average stem height (I marked a ruler on the handle of my sweep net). The treatment threshold, in number of larvae per 30 stems, varies with average stem height in inches, as follows: 12 inch - 30 to 50 larvae; 16 inch - 40 to 75 larvae; 20 inch - 45 to 85 larvae; and 24 inch - 50 to 90 larvae.

If a field is over threshold, cutting is the preferred control method because it preserves natural enemies and pollinators, and saves the cost of an application. If a decision is made to spray, remember to note the pre-harvest interval (PHI) for alfalfa, which range from 0 to 28 days, depending on the product and rate per acre. Also remember beneficial insects, including honey bees, in alfalfa are killed by most insecticides. Fields in bloom should never be sprayed – these fields should be cut. After cutting, remember to check for weevil larvae on the regrowth, which can delay or prevent green-up. The threshold after cutting is six to eight larvae per square foot of regrowth. There is only one generation per year, so weevils are not a problem later in the season. 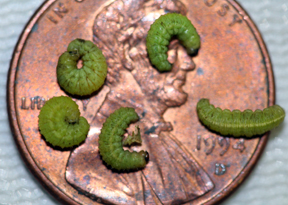 Alfalfa weevil larvae should be counted to determine the need for a spray application. 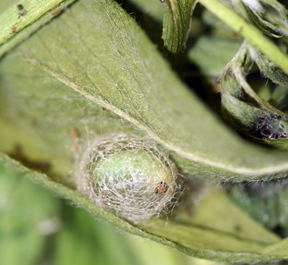 This larva is done feeding and has spun a net-like cocoon. 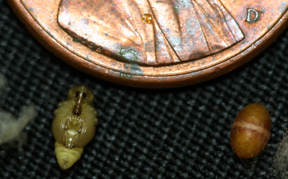 The cocoon on the left contained a healthy weevil pupa on its way to developing into an adult weevil. Note that you can see wings curved around its body, two black eyes, and an elongated head, or snout, projecting down its body. The weevil in the cocoon on the right is gone. Instead, the cocoon contains the pupal case of Bathyplectes, a wasp parasitoid. The wasp larva used the weevil larvae as a food source, killing it in the process.