As a follow up to Dave Smitley and Gerry Adam’s articles about the widespread die back of maple trees, this article offers a brief introduction to ambrosia beetles. Ambrosia beetles are closely related to bark beetles. Once upon a time, both were conveniently placed in the family Scolytidae, but that all changed a few years back when coleopterists (beetle geeks) decided to place the scolytids with the weevils in the family Curculionidae. This was done primarily because the larvae are virtually indistinguishable from each other. It is more or less correct to consider bark and ambrosia beetles as very specialized and highly evolved weevils. Many old time entomologists (like myself) still refer to them as scolytids. More modern thinkers can correctly refer to the group formally known as scolytids as “scolytines.” Insect taxonomy or their classification is constantly changing. I can barely keep up.

Ambrosia beetles differ in several ways from bark beetles. There are several morphological characteristics that separate them, but most interesting are the differences in their respective biologies. In general, bark beetle larvae develop in intricate galleries they carve out as they feed on the wood just under the bark. Most are secondary invaders of declining trees. They are also attracted to stressed-out trees that are on the verge of declining and will certainly hasten the decline of stressed-out trees when they attack in large numbers. A few bark beetles, like the southern pine bark beetle and the mountain pine bark beetle, Dendroctonus spp., are predatory and attack healthy trees. These beetles must kill their host tree in order for their larvae to successfully develop.

Ambrosia beetles and their larvae do not feed on wood per say, but on an “ambrosial” mold-like fungus. The female beetles introduce this fungus into the tunnels as they bore into the sapwood, and sometimes heartwood, of trees, shrubs and logs. The fungus grows on the walls of the galleries that the female beetle chews out. The females carry the fungus in specialized structures called mycetangia that are located in various places in and on their bodies. Once the fungus culture is going, eggs are laid and developing larvae feed on the fungus. Female ambrosia beetles develop from fertilized eggs; males develop from unfertilized eggs. Upon completing their development, the males mate with their sisters and their entirely incestuous life cycle begins anew.

The two species of ambrosia we have collected from die back samples were identified as the black stem borer, Xylosandrus germanus, and the European shot-hole borer, Anisandrus (=Xyleborus) dispar. The black stem borer was first discovered on the East Coast in 1972. Despite its common name, the European shot hole borer is thought by some to be a native species. Recently, the granulate ambrosia beetle, aka Asian ambrosia beetle, Xylosandrus crassiusculus, was found in Indiana. This beetle was first discovered in South Carolina in 1975. This invasive beetle is reported to be killing sweetgum trees and other southern species along the southern Atlantic coast. Its presence in Indiana is certainly a concern for other states in the Midwest. 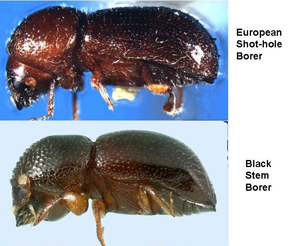 Here are the two ambrosia beetles we have recovered from the branch die back samples. Please note that they are very similar in appearance.
Photo credits: Natasha Wright, Florida Department of Agriculture and Consumer Services and J.R. Baker & S.B. Bambara, North Carolina State University. Courtesy of forestryimages.org. 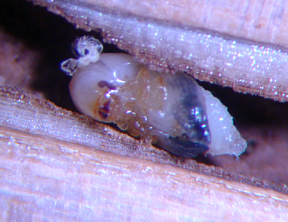 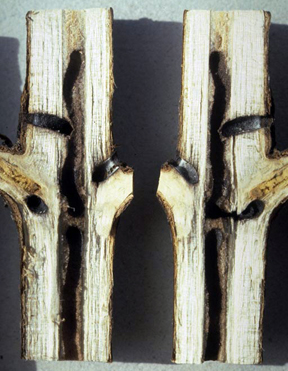 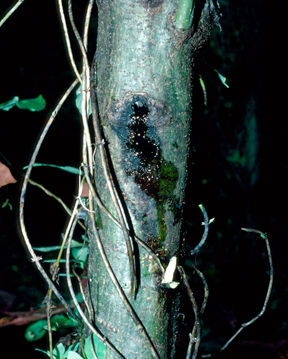