Almost no one likes paying taxes, but how do taxes compare over time?

How have federal income tax rates changed over time? Do you think taxes go up, down or stay the same? If we didn’t have an income tax, how would we pay for things like the military, national parks, federal courts and prisons, agricultural research or the many other things the federal government does?

This is the latest article about citizenship activities anyone can conduct with children. This can be done within a family, as part of school activities, a 4-H club or with any group working with young people. Have a robust dialogue about these issues, and encourage young people to find data to back up their opinions. During the discussion, try to limit interjecting your own opinions, and let the youth discuss it among themselves.

The United States had its first federal income tax in 1861 to help pay for the Civil War, kept until 1873 when it was repealed. It started up again in 1894 for one year and left again until 1913, and has been with us ever since. Tax rates have varied widely since that time.

Should tax rates be the same regardless of your income? The taxes paid on the highest income bracket have ranged from as low as 2 percent in 1894 to as high as 94 percent in 1945. What do you think of a 94 percent tax rate? It is important to consider that amount was not paid on all their income, but only on the amount made in that bracket. For example, for the high bracket of 94 percent in 1945, you would only pay that 94 percent rate on income earned over about $200,000 ($2.8 million adjusted for inflation in 2018 dollars). Income less than that would be taxed at a lower rate. For every $1 you earned over that $200,000, the government would take 94 cents of it. 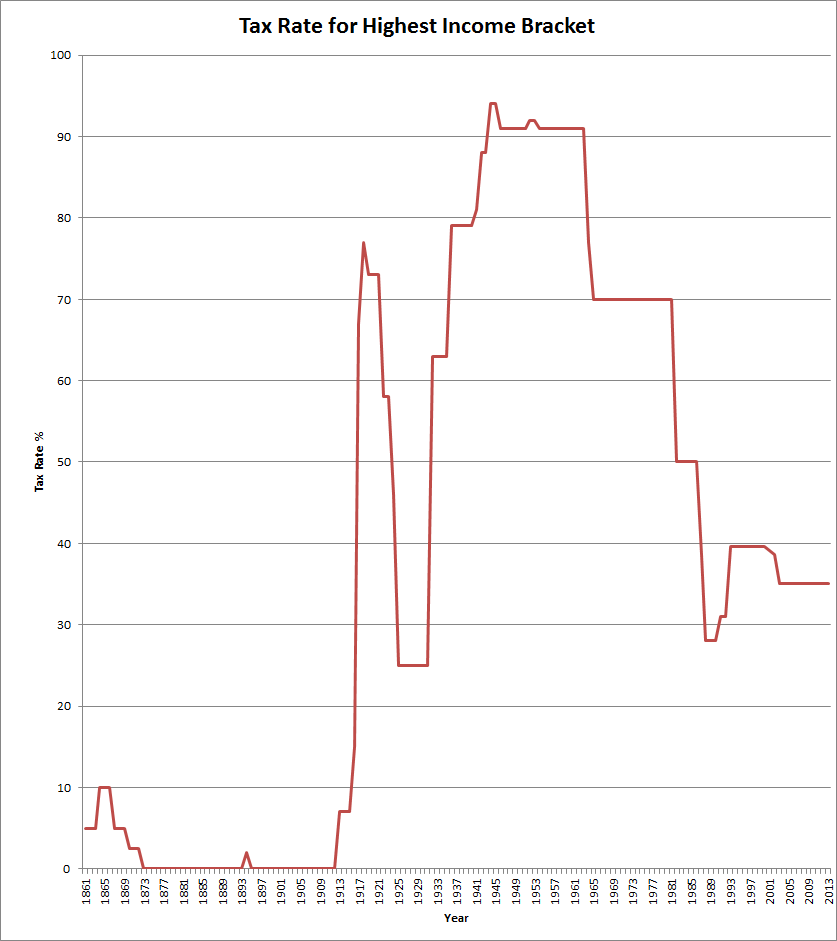 Why would the government tax wealthy folks at such an exorbitant rate? Taxes for the highest earners stayed above 90 percent from 1944 to 1962. Are there any major events that happened during that time? World War II occurred from 1939-1945. We built the federal interstate highway system starting in 1956.

Would any events justify those kind of taxes today? Another world war? The war on terror? Paying off the national debt? Improving our schools? Providing universal higher education? High-speed internet across the country?

Many things are funded by taxes, individuals could also purchase on their own or the government could not regulate. Are there things the government is doing that it should not? Do we need to invest in traveling to outer space? Should parks or prisons be run by private companies who can make a profit?

Another item to consider is that dollars reinvested into a business are not income, but expenses. For example, if you have a company that makes ice cream and you do really well and make millions of dollars, if you use those millions to buy more ice cream stores or ice cream making machines, or hire more people, those are considered business expenses and not a net profit. If an individual or company keeps recirculating money into entrepreneurial enterprises, it keeps the economy going. Perhaps that is what the government of the time wanted to encourage.

Tax dollars are used to fund government programs, from preschool to roads to the military. Spending of tax dollars create jobs, but so does spending in the private sector. It could be argued that high taxes on the wealthy are a “Robin Hood” approach of taking from the rich and giving to the poor. It could also be argued that high taxes are because the government doesn’t trust people with their own money. Where do you fall on those arguments?

Hopefully these questions will get some good discussion going about the value of your tax dollar. If you have some great ideas, share them with your county, city or township, or your state or federal legislators.

Data for this article comes from Tax Foundation.

Youth can get involved with local government

Meeting with your legislator: 10 tips to help you prepare for your meeting