Information on asparagus emergence may help commercial growers prepare for harvest, especially in situations where labor might be a limiting factor. The importance of temperature on plant growth and development is well understood. In many situations, temperature has been used successfully as a predictor for plant growth processes. However, attempts to develop temperature-based predictive models for asparagus emergence have resulted in poor prediction accuracy. This failure to develop a robust predictive model is likely due to multiple factors. The temperature threshold needed to lift crown dormancy and initiate bud development may differ significantly from the temperature required for spear growth and emergence.

In 2010, a study was initiated to determine the effect of temperature on asparagus spear emergence, and to attempt to develop a model that could be used to predict spear emergence. If successful, the information provided would be valuable to growers for planning purposes – both for digging crowns and for field harvest.

Based on this information, which is very preliminary at this stage (due to the limited number of years), it is likely that we may have a very early harvest season for asparagus if current weather conditions prevail. As of March 17, 2012, the Enviro-weather station at the Asparagus Research Farm in Hart, Mich., has accumulated 277.8 GDD, compared to 181.9 GDD in 2010 and 90.7 GDD in 2011. As most people will recall, 2010 had a warm spring and asparagus harvest began on April 29 -30 compared to May 8-10 for the 2011 season.

It is very possible that harvest could begin in early April this year. For more information, visit the Enviro-weather website and the MSU Extension News article by Jeff Andresen and Aaron Pollyea, “Record-breaking warm weather advances beginning of growing season.” 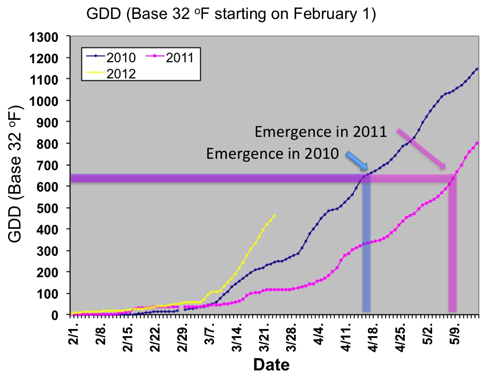