Let the spring concert begin, because knowing the extent of injury due may determine if you keep your alfalfa stands for another year.

During the winter months, soil temperatures will have some normal fluctuation and this can cause havoc on alfalfa roots, resulting in winter kill or heaving. So far, in the major alfalfa growing areas of southern Michigan, there has been some nice insulation in the form of snow to keep the soil and roots at a relatively stable temperature, and that’s music to the ears of the alfalfa plant. This year snow depths have been consistently over 6” and soil temperatures have been hovering in the 30°F to 32°F range (30.6 to 33.5) throughout lower Michigan.

Research by Dr. Rich Leep, MSU forage agronomist, showed that the amount of snow cover can significantly moderate temperatures for alfalfa plants. His study showed that when alfalfa crowns and roots are hardened, they can survive down to 0°F, and for every inch of snow cover over 3”, the temperature increases by 2°F. This shows the direct impact the snow has had on our fields compared to past years, where we had little snow cover and soil temperatures have been as low as 16°F and hover in the low to mid 22°F to 28°F range. This should ease the minds of alfalfa producers that their stands have had a mild winter and should be at a low risk of winter kill or injury. 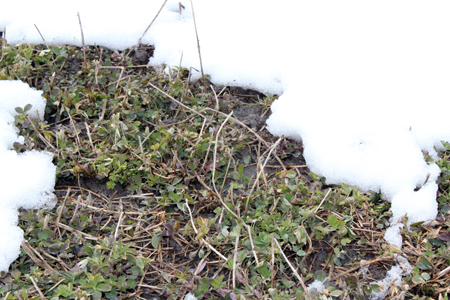 However, now is the time when wide swings of 50°F to 60°F can occur and these swings can be deadly on alfalfa plants. In 2009, significant heaving damage was reported in many locations throughout Michigan correlating to the wide temperature swings we saw during the early spring season that followed a wet fall.

Other key factors have been identified to help producers determine whether winter injury may have occurred in their alfalfa stands.

Stand age. Older stands are more likely to winterkill due to more diseases than newer seedings. However, any stand can be at risk if conditions are right. Another factor can be inadequate soil fertility causing the depletion of plants in the stand.

Ice sheeting. Since alfalfa is a living plant in dormancy during the winter months, respiration continues to take place even in very cold temperatures. If ice sheets cover the alfalfa stand, gases such as carbon dioxide, ethanol and methanol can cause significant harm to the plants.

Soil moisture. Excessive soil moisture can lead to plant and crown rots in alfalfa, causing winter kill. Varieties that have a high degree of disease resistance may influence the degree of winter injury. Wet soils can have an effect on plant vigor causing reductions in plants per square foot and yields. Wet soils can also affect the amount of soil heaving and ice sheeting.

Fall harvest. Cutting frequency, the timing of the last harvest and the amount of stubble left can have an impact on the stand. Shorter harvest intervals can have a negative effect on the alfalfa stand. Having stubble 6” will help catch snow for more insulation. Stands that had a chance to replenish root carbohydrate reserves before the killing frost were at less risk for winter injury.

As the snow cover melts and you have an opportunity to walk your fields, assessing them for potential problems can help you in your planning for the year. The first question to ask is “Did I have any winter injury to alfalfa fields?” Here are some tips for answering this question.

Slow green up. Once dormancy breaks, the field is slow to start growing since the first few inches of growth are from the carbohydrate root reserves of the plant.

Examine the roots. The last and best way to diagnose winter damage is to dig plants up with a shovel – 4” to 6” deep – and examine the roots. Healthy roots are firm and white in color. Roots that have a water-soaked appearance and are a dull or gray color are most likely winter killed. If 50 percent of the root is blackened from root rot, the plant is not likely to survive the year.

If you find that your stand has been injured, you can use the following guidelines on stem density to aid in making the decision to keep or replace your alfalfa: