May 25 to June 15 is a high-risk time period for transplanting black streak-susceptible celery cultivars as the rapid growth phase may coincide with the hottest part of the season.

As in 2005 and 2006, weather conditions were conducive for the development of a physiological disorder known as “black streak” in celery in 2010. Once again, losses with susceptible cultivars were significant since the internal disorder makes the entire crop unmarketable.

Celery plants with this defect look perfectly healthy in the field. However, when cut, some petioles show “black streaks” in the lower half or throughout the entire length of the petiole. Symptoms are generally more pronounced in larger plants than in smaller ones.

What we know about the disorder

The problem is a physiological disorder, not caused by a pathogen. Studies conducted from 2006 to 2010 show that the symptoms can be triggered under field conditions by high temperatures. In our experiment, the number of petioles with Black Streak symptoms increased as temperature was raised.

2005, 2006 and 2010 data showed that Black Streaks occurred on celery plants that were in their exponential growth phase (active growth) during the month of July. Weather data indicate that during that time air temperatures exceeded 90°F for a couple of days. Hot temperatures have an indirect effect.

Symptoms suggest that there is oxidation of compounds inside the plant. However, no study has been conducted to identify those compounds.

The cultivar “Dutchess” has so far been the most susceptible while “Greenbay” has exhibited high level of tolerance to the disorder. 2010 results ruled out the possibility that the disorder could be due to boron deficiency. In fact, too much boron seemed to exacerbate the problem.

Based on the work conducted from 2006 to 2010, we have developed a transplanting risk time period for Black Streak development in celery. This risk period assumes the following conditions based on observations in 2005, 2006 and 2010.

Based on that information, the risk of developing Back Streak is highest for celery transplanted between May 25 and June 15 for susceptible cultivars, especially Dutchess (See Figure 1).

Tips for avoiding losses in 2011

This year again our team will be monitoring the disorder and testing new strategies for avoiding losses. 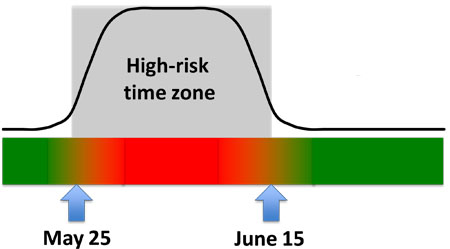 Figure 1. Transplanting risk period for Black Streak’s development in celery. The chance of developing the disorder is high if a susceptible cultivar is transplanted during the high-risk time period since the rapid growth phase of celery may coincide with the hottest part of the season.

Dr. Ngouajio’s work is funded in part by MSU’s AgBioResearch.

What can you do to avoid financial fraud?

Are you responsible for the debt of your deceased spouse?

Planning ahead to save money