Soil testing is a key practice to avoid potential potassium deficiencies in soybeans.

Several soybean farmers have contacted Michigan State University Extension regarding premature yellowing of soybeans. The symptoms observed were yellowing along leaf margins followed by scorching and dieback (Photos 1-2). Most of this damage was reported from areas that encountered some droughty conditions in 2017. Although these symptoms appeared to resemble that of potassium (K) deficiency at first glance, other factors such as herbicide injury, foliar diseases, compacted soil and root injury could cause similar symptoms to appear.

One farmer was eager to diagnose and remedy the situation because it was his first soybean crop on newly rented land. Consulting with an MSU weed control specialist, we determined herbicides used on this field this year and in the previous year would not have caused these foliar symptoms. Likewise, pathogenic causes, soil compaction and root damage were ruled out by field inspections. To check for nutrient deficiencies, the farmer was asked to do a soil test. 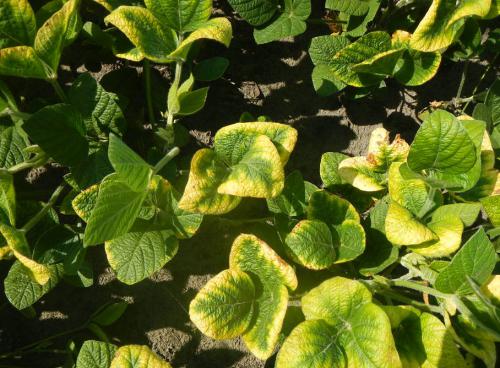 Photo 2. Close up of foliar symptoms of potassium deficiency in soybeans.

The soil test results (Photo 3) indicated that the soil had only 21 parts per million of potassium, which is in the lower end of the below optimum range. Based on the cation exchange capacity, the critical soil test level of potassium is 105 parts per million. MSU Extension’s potassium recommendation for 45 bushels per acre yield goal was 205 pounds K2O, which provides for maintenance (63 pounds) plus build up (142 pounds). This soil also needed some lime to correct for acidity and a small amount of phosphorus.

The soil test provided ample evidence that these symptoms were caused by potassium deficiency. When farmers grow crops on rented land for the first year, it is particularly beneficial to do a soil test to ascertain the nutrient status. This farmer did not apply any potassium fertilizer this year. If a soil test was not possible, at least applying maintenance levels of potassium would have resulted in a soybean yield increase in this field. 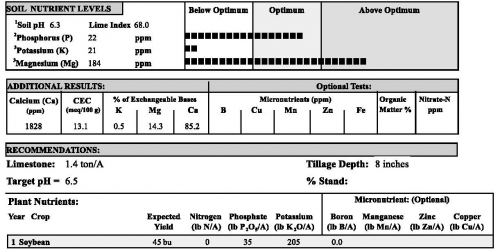 For crops showing deficiency symptoms, there are no economically effective late-season rescue treatment. The best preventive treatment is to apply potassium as recommended before or at planting of the next crop. Some potassium in the starter fertilizer is most beneficial when planting no-till or planting into soil with heavy surface residue.

Also, try and avoid situations where root growth may be restricted, such as soil compaction and pest damage. If only certain areas of the field are affected, those areas should be recorded, post-harvest soil tested and treated. Fertilizer applicators with GPS and variable rate technologies would find it feasible to spot treat these areas for the benefit of the next crop.

Some farmers apply phosphorus and potassium every two years. In that case, the application rate should be sufficient for both crops in the rotation. Potassium moves to the roots by diffusion in the soil solution. Therefore, drought predisposed soybeans to potassium deficiency this year.

Additional information on potassium management in soybeans from MSU Extension