The blossom blast symptom of bacterial canker is caused by frost injury that is induced by the ability of the Pseudomonas pathogen to induce ice formation in flowers.

Bacterial canker is a serious disease of sweet cherries in the mid-western and eastern United States caused by the bacterial pathogen Pseudomonas syringae pv. syringae (PSS). Canker infections are initiated during bloom and are associated with frost injury or extended periods of cool, wet weather. PSS bacteria overwinter in symptomless, dormant sweet cherry buds, grow and quickly colonize flowers as they emerge from the bud. In a typical winter, about 30 to 40 percent of the buds are colonized by the bacteria that rapidly leads to 100 percent colonization of flower clusters in the spring.

Surveys of sweet cherry orchards throughout Michigan conducted by MSU’s George Sundin’s lab during 2006-08 indicated that every flower cluster sampled contained populations of PSS. The size of these populations ranged from 50 to over 50,000 PSS cells per individual flower. These ubiquitous PSS populations play an important role in influencing frost injury through a process termed ice nucleation (see below), and the subsequent frost injury can kill flowers and possibly result in further infection of woody tissue.

Ice nucleation is a trait whereby PSS cells can catalyze ice formation at temperatures only slightly below freezing. Pure water can supercool significantly below 32 degrees Fahrenheit without freezing. However, the presence of ice-nucleation active PSS cells enables ice to form at temperatures of approximately 28 F or below. Once ice is formed, it rapidly propagates through sensitive tissue such as flowers, causing wounds that facilitate bacterial entry into the tissue. The severity of frost damage plays a critical role in the occurrence of subsequent wood invasion and canker formation.

The frequency of PSS cells that can act as an ice nucleus and initiate ice formation at any one particular moment is dependent upon temperature. At 28 F, only one in 1,000,000 PSS cells freeze. At 27 F, one in 10,000 cells freeze, and at 25 F and below, one in 10 cells freeze. The typical sweet cherry flower in Michigan harbors 50 to 50,000 PSS cells, so at 28 F, there are not enough cells present to induce ice formation (would need 1,000,000 cells at this temperature). However, at 27 F, up to five ice nuclei could be present (with a possible population of 50,000 cells and ice nucleation frequency of one in 10,000 cells). It only takes one PSS ice nucleus to initiate ice formation that would spread rapidly through a flower cluster.

The PSS populations tend to increase rapidly during the bloom periods that are cool and wet, and the bacteria can be further spread by wind and rain. In a “normal” season with few frost events, temperatures may not fall below 28 to 30 F, and few ice nucleation events will occur because the frequency is low (one in 1,000,000 PSS cells), and that large of a population is not present on flowers. Therefore, the blossom blast symptom of bacterial canker is not common. However, very early development of sweet cherry trees in 2012 resulted in trees that were vulnerable to multiple freeze events during bloom. With the low temperatures observed in 2012 (22 F or lower on multiple nights), almost all PSS cells became ice nucleation active, and the result was extensive frost injury and severe blossom blast. This situation resulted in the bacteria taking out entire flower clusters and even all of the clusters on each tree (Photos 1 and 2). 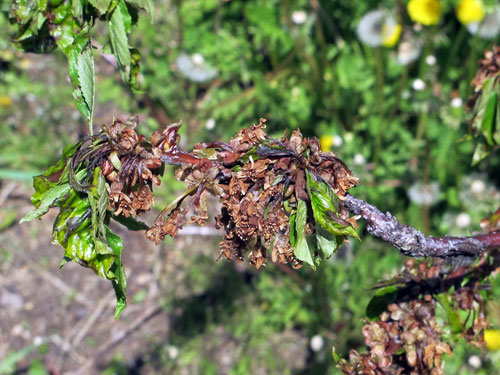 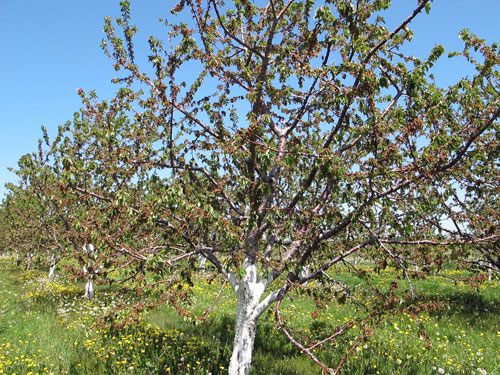 Photo 2. Essentially all spurs on this cherry tree are affected by bacterial
blossom blast.

After the occurrence of blossom blast, the further progression of bacterial canker can follow two paths:

Assessment of affected sweet cherry trees in northern Michigan over the last few weeks suggests that the canker pathogen is following the first path in most trees; in short, we are not observing significant numbers of new cankers forming in branches.

These observations are good news as new canker formation in branches could have killed a significant number of trees from this event. PSS inoculum in trees is reduced during the summer months as the bacterial cells are inhibited by temperatures above the mid-80s and dry conditions. The pathogen will become reactivated by cooler temperatures in the fall, and wind and rain will disseminate cells to leaf scars during leaf drop. The bacteria colonize the leaf scars and migrate to dormant buds where they will overwinter.