Often when red ink appears in government budgets the reaction is to make cuts and balance that year’s budget. But there are also strategies to incorporate for long-term fiscal sustainability – so future year budgets are also balanced.

When government budgets are tight, on first blush one might question if scarce dollars should be spent on capital improvements – roads, parks, sewer, water, buildings, vehicles and other such things. However the “correct” answer is not that simple.

Things wear out. Eventually equipment needs replacing. One of the causes of government financial instability is not planning for, and having funds set aside for predictable and unpredictable expenses. One can make a reasonable educated guess about how many years a building’s roof will last. If a building has a 20-year roof and the building is 15 years old today, then planning on the expense of a new roof for about five years from now is prudent. If that was not done, and the roof fails, the local government still will have the cost for the roof, it just will not be planned for. Thus, the mini-financial crisis arises to come up with the money for the roof.

The same thinking is true for the life-expectancy of roads, water, sewer, storm drainage, park facilities, vehicles and so on. The prudent community will plan for these expenses and have a finance system in place to pay for those costs. It may be setting funds aside so the money is already in the appropriate fund, it may be a bonding program, or a lease-pay-back system. The point is this has been thought out and planned for. Such plans, or documents, are called Capital Improvement Programs (CIP).

There is also a second, very important reason, for CIP. Even when a community is financially struggling to make ends meet – it is not enough to balance one’s budget for the short-term. Another part of creating long-term fiscal sustainability is taking actions and making investments to build a growing tax base and source of income for future years. That often means a government should be targeting its CIP spending to stimulate and create that growth.

Part of long-term economic stability and growth (which leads to tax base and local government revenue growth) is attracting talented workers to your region. This is an important economic development strategy. Research on housing markets and demographics has demonstrated the demand for quality of life and places is what attracts talented workers. Those workers are very mobile, and can choose to live anywhere, and they do. But this is the demographic that possess the skills which employers seek to locate near. If you have talented knowledge workers you have the major attraction point for new employers. Also talented, or knowledge workers, are often entrepreneurs who create their own jobs, new businesses and economic activity. Only those communities that measure up to what they want will be successful in the new economy. Placemaking strategies in a CIP are the tools to transform a community into one that can attract talented workers. For the long-term that balances a government budget for future years. 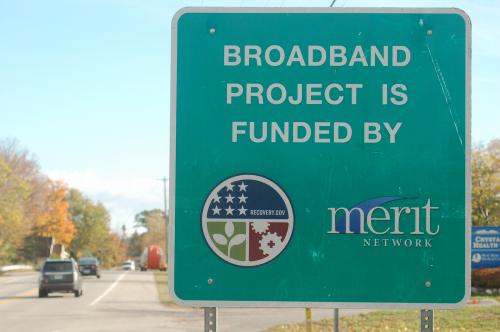 So a government should not just focus on balancing its annual budget that that pays for the day-to-day operation of government; things like employee salaries, benefits, office supplies, phone, internet and other operation costs. Focus should also be on a long-term strategy including strategic investment in expenditures that fulfill your community’s role in the larger regional economic development effort. For purposes of a CIP we are talking about capital expenses which can be viewed as having the following characteristics:

The Government and Public Policy team at Michigan State University Extension are currently developing curriculum for an intense Fiscal Sustainability training for local government officials. We expect to pilot the training in the first half of 2014, with general availability later in 2014. If interested please contact Eric Scorsone or the author of this article.

Making the most of Geographic Information Systems (GIS) in your community