Be alert for armyworms

I am getting an increasing number of calls about armyworms in northern Ohio and the southern counties of Michigan, in corn but especially in wheat. Back in 2004, our last big armyworm outbreak in wheat, many people commented on how fast damage seemed to occur – one day the field looked fine, a couple days later the wheat had thinned considerably. This highlights the importance of scouting. There is no substitute for walking into a field to see what is going on. For many insects that feed as larvae or nymphs, the younger the insect, the easier it is to kill. This means a higher percent control, or the use of a lower rate of insecticide, which saves money. Also, larger larvae eat more and are often responsible for the majority of damage. This is why a field can go from looking fine to looking funky overnight – the larvae are getting bigger and eating more, faster. Thus catching an infestation early prevents loss from larvae and improves control. Use thresholds to make a spray decision, as there are biological controls that kill armyworms naturally (disease, parasitic wasps, predators). Spot spraying may be possible along field edges or in areas that had heavy weed growth, a problem this spring. 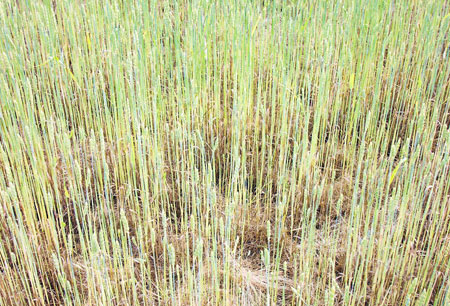 Wheat severly defoliated and head-clipped by armyworm in
Sanilac County in 2004. 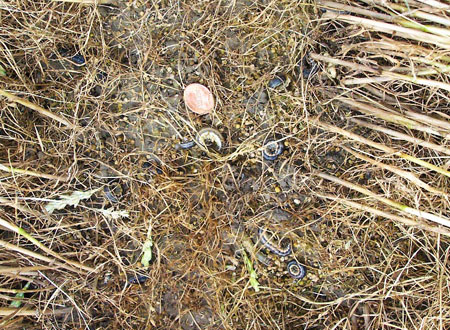 The floor of a wheat field, with numerous armyworms and
several clipped heads.

In wheat, in many cases the caterpillars are still small and feeding on leaf margins, but feeding on the flag leaf is starting. Treatments are targeted not only to prevent defoliation of the critical flag leaf, but also to prevent larvae from clipping heads later in June and marching en masse to neighboring fields. The threshold in wheat that is heading is only two armyworms per square foot. If you see feeding injury but cannot find larvae easily, shake the plants vigorously so that larvae fall to the ground, and look carefully at the base of the plant, pushing the residue aside. Armyworms often hide out at the base of plants during the day, moving up on the foliage in the evening to feed. They may also be more active on cloudy days.

When making a spray decision in wheat, note pre-harvest intervals. The insecticides below are listed in order of PHI. All are effective at controlling small to medium-sized armyworms.

Please note that Lorsban 4E cannot be used on wheat in Michigan. I confirmed this with the Michigan Department of Agriculture. The Lorsban label is confusing in this regard – wheat is on the label, but 4E use is restricted to just 18 western states. Most of the Great Lakes states (IA, IL, IN, MI, OH, and WI) are not on this list.

The labels of most products give a range of application rate. If larvae are small, you probably can use a midrange rate of insecticide rather than the full rate. I have heard, for example, that a 3 oz rate of Mustang is working well in southern Michigan. If possible, spray a bit later in the day, as larvae will crawl across the treated surface later that evening as they climb plants to feed.

For organic production, several Bt products are available, but they are effective only on small larvae. Pyganic, which contains pyrethrin, can also be used in some organic certification schemes. The PHI for both Bt and Pyganic is 0 days. Entrust (1-2 oz), a spinosad-based insecticide approved for organic use, has a 21-day PHI.

On corn, larvae often hide in the whorl or at the base of plants. Large cylindrical frass (excrement) pellets in the whorl are a sign that larvae are present. Armyworms feed on the leaf margins; in severe cases, all leaf material is eaten leaving only the midrib. The threshold is 25% of plants with at least two larvae per whorl, or 75% of plants with a single larva per whorl. Sprays directed down into the whorl should kill the larvae hiding out there quite easily, unless the larvae are large. Pre-harvest interval is obviously not an issue with corn. Products include Ambush, Asana, Baythroid, Capture, Intrepid, Lorsban, Mustang, Pounce, Proaxis and Warrior, as well as Bt insecticides and Entrust for organic production (targeting small larvae).

A few other insect notes

Alfalfa weevil. A few larvae and now adults and are still feeding on second growth alfalfa. It’s a bit late to do anything about it. We are not alone in seeing this slow increase in weevil problems over the last five to seven years. Many surrounding states have observed the same thing.

Black cutworms are reported as well in corn and soybeans, up to an inch long. Fields with poor weed control – and there’s a lot of those – or a cover crop are at risk.

Fireflies are flashing, so corn rootworms are hatching.

Potato leafhopper are increasing in alfalfa. They can be easily controlled if caught before number go over threshold.

Soybean aphid was found this week in Ingham County. Colonization remains low in Michigan. Most other Midwest states have also reported finding aphids. Suction trap catches will be online soon at: http://www.ncpmc.org/traps/state.cfm?state=MI. A fourth aphid suction trap went up in western Michigan in Mason County, hosted by Extension agent Norm Myers and Oomen Brothers Farm. A fifth trap will go up next week at the Monroe County MSU Extension office.