Be aware of poison ivy and other rash-producing plants

Itching to get outdoors? Hikers and other outdoor recreationists need to educate themselves about poison ivy and other similar species to avoid developing the classic itchy skin rash associated with these plants.

After a long Michigan winter, many are anxious to get outdoors and enjoy a walk or hike through the fields and forests of Michigan. But as any avid outdoors-person will tell you, there are certain plants (poison ivy and others) that people should avoid touching with their bare skin if they hope to avoid developing the annoying, itchy rash associated with these plants.

While a relatively new invasive plant known as “giant hogweed” (Heracleum mantegazzianum) has recently made the news in Michigan because of the severe reactions that people can have to the sap of this plant, such as skin lesions and potentially long-term blindness, other “poisonous” plants such as poison ivy (Toxicodendron radicans) are more commonly found. According to the United States Department of Agriculture (USDA) Natural Resource Conservation Service’s PLANTS Database, poison ivy can be found in almost every county of Michigan.

Consequently, if you do not already know the old adage “It if has leaves of three – let it be!” then learn how to identify poison ivy in order to avoid coming in contact with it. For starters, the poison ivy plant has a three-leaflet compound leaf rather than a single or simple leaf. The leaflets are generally 2 to 3 inches long and are yellow-green in color. The upper leaf surfaces of poison ivy also appear shiny in many cases. This “shininess” is actually an oily-type substance on the leaf surface and it is this substance that causes the itchy skin rash and blisters associated with poison ivy. 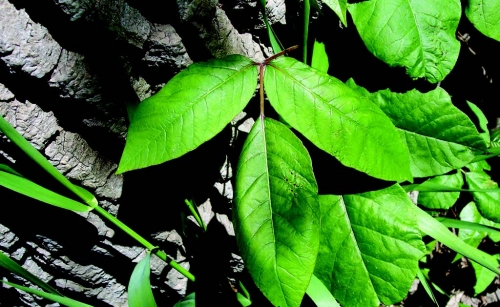 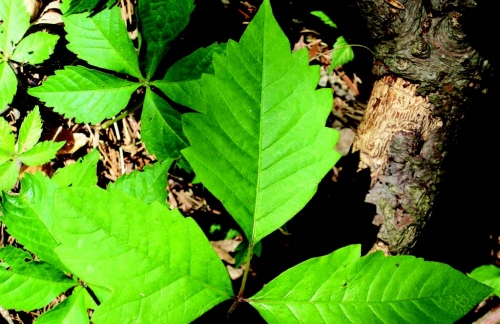 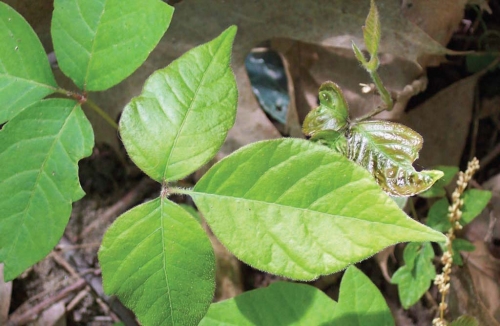 Poison ivy leaves can take many forms. However, the leaflets of three remain constant, and the space between the two lateral leaflets is reddish. Photos from MSU Extension Bulletin E2946.

In Michigan, there is another plant occasionally encountered in the wild that causes skin rashes and blisters similar to poison ivy. It is called poison sumac (Toxicodendron vernix). Poison sumac is a much rarer plant to find in nature and is almost always found in very wet locations. According to the USDA Natural Resource Conservation Service’s PLANTS Database, Poison sumac is mostly found growing in southern lower Michigan with only a few scattered locations in the northern portion of the Lower Peninsula. It is not known to be native to the Upper Peninsula.

More information on many of these “poisonous” plants discussed in this article is available from Michigan State University Extension publications E2935 “Giant Hogweed” or E2946 “Poison Ivy." These publications address the identification, prevention and control of these nuisance plants along with common look-alikes that are easily confused with these species.