The window of opportunity to influence flowering and reproductive capability for the 2013 season of branches in apples is upon us.

From the longest day of the year (June 22) to July 15-20, bending of new branches below the horizontal can begin the slow process of changing the tenor of branches from maintaining a vigorous, vegetative state, to slowing growth down and changing the buds to becoming more fruitful. 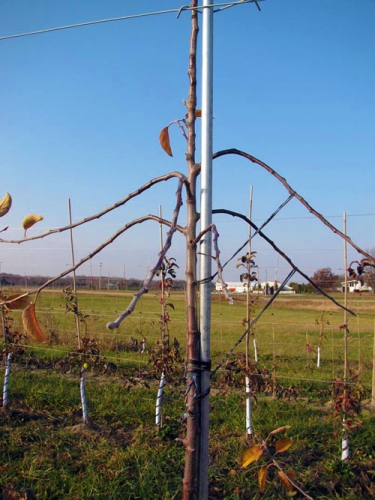 I first learned of this interesting management tool in the 1980s from Jeff DeCoster who was a long-time fruit advisor in Belgium where he helped growers in developing high density apple orchards on dwarfing rootstocks. At that time, he demonstrated the use of modified weighted clothes pins and even cement pieces clung to nails shaped as hooks to hold to branches. He used to say that the bending process during this time of year in our latitude mimicked hanging fruit, which resulted in the same outcome. The physiological process is not clearly understood, but appears to be associated with the changing of hormones along with an accumulation of carbohydrates in branches that are subtended. 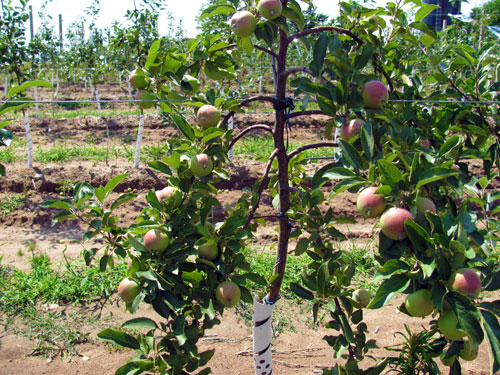 During this period, buds begin to develop in the leaf axils in what is known as flower bud initiation (for acronym-loving folks, “FBI”) and continues to develop through the rest of summer, fall and the final flower bud development stage where flower primordia are fully developed. This occurs in the latter part of winter preceding spring and bloom. This is why a heavy crop for many varieties, such as the antique varieties and Goldrush, are so severely impacted by the current season crop. A heavy crop that taxes the plant of carbohydrates and hormones during summer negatively impacts FBI. The result is alternate bearing. Other stresses can have a similar impact during this period such as drought, severe pest infestation, etc.

The process of bending branches is a must for growers who are training young trees in the high density systems such as the Super Slender Spindle, Tall Spindle and Vertical Axe. The closer the trees are planted, the more severe the bend in the angle of the branches. In the Vertical Axe, the practice is imposed only on the branches above shoulder height. The reasoning in this latter system is that trees are spaced further apart and allowed to develop larger canopies. Several research projects over many years have shown that there is a direct relationship between branch angle and branch vigor. Branches that are more vertical will remain vegetative longer in its life. Branches that are bent below the horizontal and even upside down are slowed dramatically and many buds become reproductive along with formation of more spurs. Apples growing on dwarfing rootstocks respond positively to this process. 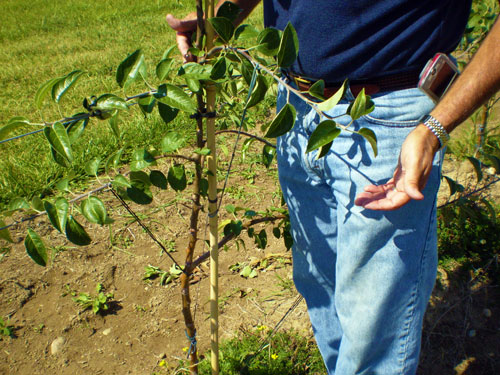 In our shortened crop year in Michigan in 2012, many growers understandably feel the need to adjust and reduce resources in managing orchards. Some are spraying plant growth inhibitors such as Apogee to slow growth, which, depending on the variety, can be very effective. Unfortunately, while Apogee may slow branch growth development much like subtending branches, it has for most varieties only a weak positive affect FBI.

We have used the UV light-resistant rubber bands for years with good effectiveness without the worry or bother with girdling. The negative is the time it takes to subtend branches and, in many cases, growers have to use two bands – looped within itself to make it long enough to fully extend the branch downwards (expand the hypotenuse on the triangle).

Last year, we began using floral wire (18 inches in length) to do the job and found that the 20 gauge wire was best. Ends of the pieces can easily be formed as hooks to catch branches and leaders. Setting these is quick compared to bands, but realize that they must be moved later in the season to avoid branch injury (girdling). The benefit is that the same wire can be moved higher in the canopy after affecting young, succulent branches. After two to three weeks, lignin sets in the branch near the bend and is permanently influenced.

How many branches do growers need to do on a typical young tree? As many as they have time for (typically at least five to seven). Short branches (less than 6 inches) do not need to be bent.

After trees begin fruiting in years two and three and following branch bending, the grower has changed the tree so that it has become more reproductive and calm. The practice can be suspended after about years five to six.

Dr. Perry’s work is funded in part by MSU’s AgBioResearch.

A Pocket Guide for IPM Scouting in Michigan Apples (E2720)