Benefits of plants: Life as we know it, live it and pay for it

Have you promoted the benefits of plants at your greenhouse business lately? Consider promoting how plants benefit our planet, lives and wallet.

Greenhouse retailers often do not communicate to consumers about the benefits plants provide. Michigan State University Extension encourages floriculture retailers to consider marketing the benefits of plants explained in this article as one way to potentially increase sales. Gardeners, too, will appreciate these benefits as explained below.

Life as we know it

The ultimate benefit of plants is the air we breathe. Our ancient Earth likely contained very little free oxygen, but scientists estimate that about 2.5 billion years ago the evolution of photosynthesis, whose byproduct was oxygen, was the ultimate cause of the rise of oxygen levels in our atmosphere (Photo 1). Modern levels of oxygen in the atmosphere allow us to breathe easy, thanks to photosynthesis.

Today, the levels of oxygen in our atmosphere are not much of a concern, but the rapid rise of carbon dioxide is. However, another benefit of photosynthesis is the absorption of carbon dioxide from the air which ultimately transforms into carbon (organic matter) stored in plant tissues (Photo 1). If the carbon is stored long-term, such as in trunks of long-lived trees, this process is called “carbon sequestration.” Many scientists are looking at ways to use plants to sequester carbon in order to mitigate or defer global warming.

Photo 1. The chemical formula of photosynthesis showing how six carbon dioxide molecules and six water molecules in the presence of sunlight are converted into one molecule of organic matter and six molecules of oxygen.

Plants also provide other ecosystem services, like cleaning outdoor and indoor air. Plants do so by absorbing gaseous pollutants, like ozone, nitrogen oxides and sulphur dioxides, through their leaves when up-taking carbon dioxide for photosynthesis. However, plants also collect dust, ash, pollen and other particulate matter on their leaves and thus reduce these pollutants in the air breathed. One study found that urban trees in the United States can remove 711,000 metric tons of air pollution annually.

Another ecosystem service plants provide is their ability to clean up contaminated soils. Phytoremediation is defined as the use of plants to remove, contain or transform pollutants and is commonly used to rehabilitate soils that are laden with pollutants like metals, pesticides, polychlorinated biphenyls (PCBs), fuel hydrocarbons and excessive phosphorous or nitrogen.

Life as we live it

Studies have shown that plants in the workplace and school reduce employee and student stress and provide beneficial health effects, such as reducing stress, lowering blood pressure, releasing muscle tension and increasing positive feelings. These benefits can be translated into improved health and worker and student productivity. And the plants don’t have to be indoors. Studies have shown that employees who had a view of nature, such as trees and flowers, were less stressed, experienced greater job satisfaction and reported fewer headaches and other illnesses than those who had no natural view.

Extensive research suggests that regular physical exercise is associated with many health benefits, such as lower mortality rates, decreased risk of some cancers and improves mood. Research has also shown that many gardening tasks, like planting transplants, mixing growing medium, harvesting, sowing, hoeing, mulching, weeding and raking, are considered at least moderately intense forms of exercise. In fact, 30 minutes of gardening burns approximately the same number of calories as does 30 minutes of walking (Photo 2). 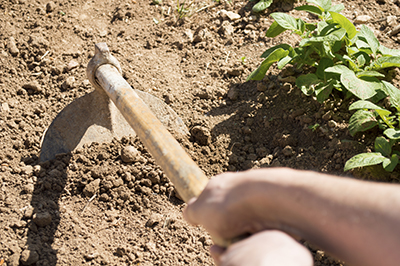 Photo 2. A gardener reaps the many health benefits of tending to a garden by using a hoe to till the soil for weeds.

Plants also have other positive impacts on our health. One study found that hospital patients experienced faster recoveries from surgery when they had a window view of a natural setting. In addition, many of our modern medicines are derived from plants. For instance, chemicals extracted from the foxglove plant are used to treat congestive heart failure, extracts from the bark of Japanese yews are used to treat ovarian cancers and the aloe plant is a source of salve to provide relief for minor burns and wounds.

Plants can also help reduce crime. One study found that the more trees and grass an inner-city apartment building had around it, the fewer property and violent crimes reported. Community gardens can serve to bring people together in a neighborhood and have a positive impact on community cohesion.

Life as we pay for it

Not only are many plants tasty and generally healthy for you, but if you grow your own food, it can save you money. How much money can be saved depends on many factors, including your needed upfront costs. For instance, some gardeners are content with tilling a portion of their yard (renting a tiller) and dropping a few seeds in the ground. Others have poor soil and so would like to build raised beds, purchase garden soil to fill the beds, build a fence to keep critters out and perhaps buy gardening tools too. In addition, your time to maintain a garden can be factored into cost as well. However, keep in mind that any food harvested from your own garden will be as fresh as possible and truly locally produced.

Another benefit of plants is they can add significant value to a property. One study reports that a well-planned home landscape can add anywhere from 6 to 11 percent to the value of the house (Photo 3). The percent increase depends on region of the United States, landscape design sophistication, plant size and plant diversity. Many other home improvement projects do not yield such a positive return on investment. Another study demonstrated that on average, homeowners can realize a 109 percent return on every dollar spent on landscaping projects.

Planting larger plants, like trees and shrubs, can also lower your energy bill. If planted in the proper location, trees or other ornamental plants can shade a house, reducing the amount of incoming solar radiation in summer. This translates for a cooler indoor temperature and potential for reduced need for air conditioning, thus reducing the electricity usage and saving money. One study found that in California, summertime electricity use can be reduced on average 5.2 percent by trees planted on the west or south side of a home at an appropriate distance to shade the home. In Alabama, researchers compared houses with dense shade cover versus those with no shade cover and found that the densely shaded houses saved up to 50 percent in their summer electricity bills due to reduced air conditioning use.

While there are many benefits to plants, floriculture retailers can emphasize these basic benefits to promote not only their own business, but also the entire ornamental plant industry. To see some examples of how some organizations are helping to promote plants, visit the Plant Something website, the Canadian Ornamental Horticulture Alliance website Plants Love You or BASF’s Plants Give Back video.