Be on the look-out for blueberry leaf rust, particularly in fields that have had a problem in previous years. While this disease is relatively rare in Michigan, it can be severe in fields that are affected. Rainy periods in the middle of the growing season are conducive to disease development. It also occasionally pops up on blueberry plants in greenhouses. Leaf rust is caused by the fungus Pucciniastrum vaccinii. Yellow spots appear on leaves by mid-season and eventually turn reddish-brown (Photo 1). On the lower leaf surface, yellow to orange spore pustules (uredia) are present, which may turn rusty red with age (Photo 2). You have to turn the leaf over to see the orange pustules. The disease is not systemic in blueberries. Leaf rust can rapidly increase towards the end of the season. It generally has little impact on yield, but may cause premature defoliation. It is possible that severe defoliation could affect winterhardiness of the canes.

The alternate host of the rust fungus is hemlock (Tsuga spp.), which explains why the rust is more severe in the vicinity of hemlock trees (up to a half mile). Airborne aeciospores from hemlock needles infect blueberry leaves in early summer. Yellow uredospores (Photo 2) then develop on blueberry leaves and spread the disease among blueberries. The uredospores are airborne and spread easily from leaf to leaf and bush to bush. In fall, teliospores (the overwintering stage) form in the rust pustules on blueberry leaves. The teliospores produce basidiospores, which are airborne and infect hemlock needles in early spring. In areas where green leaves are present all year (in the southern United States or in greenhouses), hemlock trees are not needed. On green leaves, the fungus will continue to perpetuate itself via the orange/yellow uredospores.

For management, a recommendation to remove hemlock trees within a half mile may neither be desirable or practical. However, it would remove the alternative host, which would break the life cycle in cold climates. Raking up blueberry leaves after leaf fall and burning them can also help to reduce inoculum carry over. Other things that can be done: limit overhead irrigation to reduce leaf wetness and apply effective fungicides during periods of high risk (usually starting before or shortly after harvest). Though we have not evaluated any fungicides for rust control in blueberries in Michigan, the sterol inhibitors are usually quite effective against rust fungi, and both Indar (30-day PHI) and Orbit (30-day PHI) are labeled for rust control. Bravo also lists rust on the label – just remember the PHI is 42 days and sprays are not recommended after full bloom due to potential phytotoxicity. However, all of these fungicides can be sprayed after harvest provided that the maximum number of sprays per season is not exceeded. Sonata (Bacillus pumilis), a biofungicide is also labeled for blueberry rust control and has a zero-day PHI. Adding NuFilm as a spreader-sticker improves activity of Sonata. Abound does not have rust listed on its label and the labels of Pristine and Cabrio list “suppression” of rusts only, which indicates that they are only moderately effective against rust. 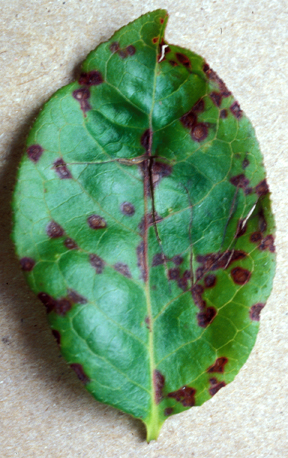 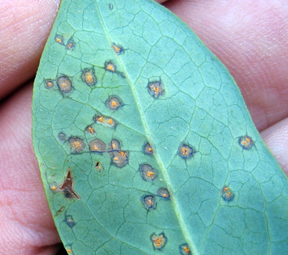 The Why and How for Training, Pruning, and Crop Management in Small Fruit and Tree Fruit

The Dirt on Plant Nutrition