Adult moths coast in on weather fronts, leaving behind larvae that hide in the soil by day and feed on seedlings by night.

Low numbers of black cutworm moths are being caught in parts of Michigan, with moths detected in Montcalm and Lenawee counties. Purdue University Extension and University of Illinois Extension have caught the pest in varying numbers across their respective states. For estimates of when flights may have occurred in your area, refer to the weather-based models at InsectForecast. Read on to learn more about this early-season pest of sweet corn.

The larva of black cutworm causes sporadic damage, primarily stand loss, to young crop seedlings. Adult black cutworms are a moth that migrates into Michigan from the southern U.S. and Mexico every year from early May to mid-June. The arrival of the adult moth is aided by weather fronts moving from southern to northern areas. They are often detected in pheromone monitoring traps just after the passage of these weather systems.

The moths are fairly large with a wingspan of 1.5-2 inches. When the wings are closed (as above), two-thirds of the body are so dark brown they appear black. A key feature to look for is dark, dagger-shaped markings on the back third of the wings.

Female moths lay eggs on a number of plant species, with a preference for winter annual broadleaf weeds such as chickweed and various members of the mustard family, among others. The eggs are small, spherical and laid in clusters. Female moths can lay up to 1,900 eggs in her lifetime.

The larval stage is the damage-causing life stage, though only the older caterpillars cause significant damage. Young larvae feeding often goes unnoticed, as it manifests itself as small holes in the leaves of vegetables and weeds. Once larvae reach approximately 0.5-0.75 inch in size, damage is noticeable (described below) and larvae can be hard to control. 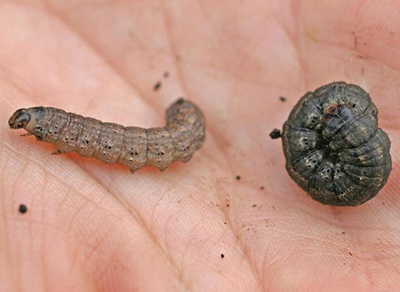 Black cutworm larvae. Notice the smooth appearance as well as the characteristic “c” curl of the larvae on the right. Photo: Roger Schmidt, University of Wisconsin-Madison, Bugwood.org.

The black cutworm name reflects one of their key characteristics: their dark coloration. Their body is relatively smooth and sometimes described as having a greasy sheen. When disturbed, larvae curl into a c-shaped ball. They feed at night at or just below the soil line, cutting seedlings close to the base. During the day they seek shelter by hiding in the soil or under crop residue.

After feeding for 30 days (can be slower or faster depending on temperature), the larvae dig into the soil and become pupae. Black cutworm does not survive Michigan’s cold winters, so the next year’s moths will return again the following spring from the southern U.S.

Black cutworm is capable of feeding on a wide range of vegetable crop, including both direct-seeded and transplanted sweet corn, tomatoes, vine crops and cole crops.

Larvae feed along or below the soil line, causing wilting due to root damage or, more characteristically, cutting the plants off at the soil line. Estimates for how many plants a single larva can cut and consume vary, with some suggesting they can cut four plants total in their lifetime, while others suggest they can do this in a single night. The risk of damage reduces as plants grow. In sweet corn, plants are most susceptible between emergence and the six-leaf stage.

To spot damage in a field, look for areas where there are two to four stunted or missing plants. 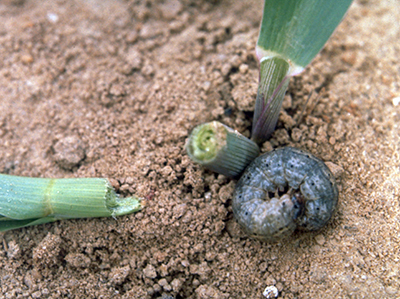 A large black cutworm larvae curled in the c-shape next to a recently cut plant. Sometime larvae will pull the cutting into a hole and feed further. Photo: W.M. Hantsbarger, Bugwood.org.

Similar species and other causes for stand loss

Other caterpillar species that may be present early in the season are true armyworm and variegated cutworm. True armyworm has a distinctive stripe along the side of the body and inverted “Y” marking on the head capsule. These caterpillars feed on the upper portion of the plant, devouring most of the young plant as opposed to cutting the plants off at the base.

Variegated cutworm has a brown, striped appearance (as opposed to the dark coloration of black cutworm) and also feeds on the upper portion of the plant.

Clipping of young sweet corn seedlings can also be the result of feeding by wildlife, notably Canada geese and sandhill crane. Plants clipped by birds are often more scattered in fields. There may also be other signs such as bird excrement and tracks indicating the past presence of these birds.

Reduced numbers of plants in early-season corn plantings can be the result of a number of other issues including pests that attack the seed (i.e., seedcorn maggot) or planter malfunction. When scouting a field, closely inspect for the presence or absence of stem remains and a little digging to determine which pest is thinning plantings.

To reduce the chances of black cutworm moths laying eggs in your field, control winter annual weeds well before planting. Killing weeds at least 10-14 days before planting will reduce the attractiveness for females to deposit eggs, as well as reduce food sources for any recently hatched larvae. Tillage before planting that buries weed residue can also reduce egg deposition sites, as well as the chance of survival for any eggs or larvae already present.

There are different ways to monitor for the arrival of black cutworm in the spring. Pest management and crop update newsletters from various sources (including MSU Extension) will often inform growers of the arrival of black cutworm moths in Michigan. Individual growers can also monitor local flights with pheromone traps. Pheromone traps are inexpensive—the bucket style trap used for catching black cutworm and many other moths can be purchased for less than $10, and can be used to trap other moth species later in the season.

(A) A bucket style trap, which can be baited with many types of pheromones, including that of black cutworm moths. Photo: Julieta Brambila, USDA APHIS PPQ, Bugwood.org. (B) Adult moths will be captured in the trap. Their wings may be damaged, but the dagger shape may still be visible. Photo: Adam Sisson, Iowa State University, Bugwood.org.

Degree-days can be used to predict when the larvae will enter the stages of development when plants can be significantly damaged. Black cutworm uses a degree-day base of 50 degrees Fahrenheit, and eggs can hatch as early as 90 degree-days. Larvae begin to enter the most damaging part of their lives at 300 degree-days, signaling a good time to start scouting for damage. When this degree-day consideration is matched with trapping information, you can monitor degree-day accumulation when adult moths arrive, allowing for more accurate predictions of caterpillar presence.

If you suspect you have black cutworms in your area, North Central IPM recommends scouting your sweet corn fields weekly (if not more) from the time plants emerge to the six-leaf stage. Inspect 100 plants in three locations, looking for plants that have been cut near the soil line or pulled partially underground. Inspect the base of injured plants, digging around to find the worm that caused the damage. Take note of their size (greater than or less than 0.5 inch in size). The size of the larvae will be used in determining treatment thresholds.

After scouting, compare the stand loss you saw and the size of worms you found. Small larvae (less than 0.5 inch) causing 3 percent or greater stand loss means a treatment may be needed. Larvae larger than 0.5 inch causing 5 percent stand loss also indicates a need for management action. Also, note if very large larvae (1-1.5 inches in length) are approaching maximum size because they will pupate soon, thus ending their damage. Large larvae are typically difficult to kill with most insecticides. As plants grow beyond the 6-inch stage, they will lose their vulnerability to black cutworm.

If the decision to apply an insecticide is made, there are multiple products available. Conventional growers have many options, including pyrethroids. A potentially effective alternative is baits that attract larvae to feed and then kill them; some products are available that are labelled for over 200 crops in Michigan and can be spread on the ground in problem areas. Row covers/low tunnels can also protect seedlings.