Americans enjoy blueberries year-round, fresh or frozen, in muffins, pancakes or smoothies. In fact, the U.S. per capita consumption has more than tripled since the mid-2000s.

Americans enjoy blueberries year-round, fresh or frozen, in muffins, pancakes or smoothies. In fact, the U.S. per capita consumption has more than tripled since the mid-2000s, according to the U.S. Department of Agriculture market reports.

Michigan is one of the top U.S. producers of blueberries, with the berries available fresh during the summer months. Take a trip to a blueberry farm to learn more about blueberries, how they are grown, and where they go after they leave the farm.

As you enjoy the tasty treat, take some time to learn and share some plant science and other facts about blueberries. Here are a few fun blueberry facts:

Pete Callow, a retired technician who worked as a blueberry researcher assistant at Michigan State University since 1984, states “Blueberries are a terrific fruit, they taste great, are good for you, there's no pit, you don't have to peel or slice them, they're easy to freeze, you can eat them fresh or bake with them. Plus, you can harvest them standing up.”

Blueberries are available all year, but if you want your own fresh off the bush, you can find a pick-your-own farm in Michigan to get the freshest, tastiest blueberries. To learn about growing blueberries, Michigan State University Extension has a number of resources on the growing blueberries page. Also, check out the “Using, Storing and Preserving Blueberries” fact sheet, available from Michigan Fresh.

There are many ways to incorporate blueberries into recipes, such as blueberry stuffed French toast. One of my favorite ways to enjoy blueberries, especially in the winter, is blueberry jam. The following is an easy blueberry jam recipe you can make with kids, adapted from Real Simple Magazine, July 2011.

In a medium saucepan, add the blueberries, sugar, lemon juice and salt. Stir to combine and gently smash the blueberries with the back of a large spoon until they begin to release their juices. Some berries will still be somewhat whole and that is fine.

Heat over medium high heat for approximately 18 to 25 minutes, stirring occasionally. Mixture will thicken and darken in color. Remove from heat and pour jam into glass jars. While still hot, place lids on jars to seal them.

Store jam in refrigerator for one month or place in freezer for up to one year. 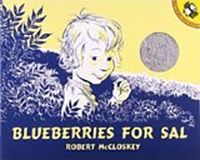 After a tasty blueberry treat, I suggest reading “Blueberries for Sal.” This book is geared for 3-7 year-olds. Sal and her mother are picking blueberries to can for winter, but when Sal wanders to the other side of Blueberry Hill, she discovers a mama bear preparing for her own long winter. Sal’s mother is followed by a small bear with a big appetite for berries. Will Sal and the small bear find their own mamas?

Strawberries and the science behind them